It's a good thing Greg has a broken arm because if he didn't, I'd never have been able to talk him into going mushroom hunting for the second time in a week. He'd have insisted, of course, on mountain biking, and we'd have missed the staggering abundance of the forest that resulted in our bringing home triple last week's take of boletes.

The squat, bulbous, orange-capped boletes -- and countless other fungi in wildly varying shapes and shades -- are magically pushing up out of the earth just about everywhere right now, and every one of them seems to exude its own unique character and personality. I feel strangely compelled to photograph every individual encountered, as though taking its portrait. 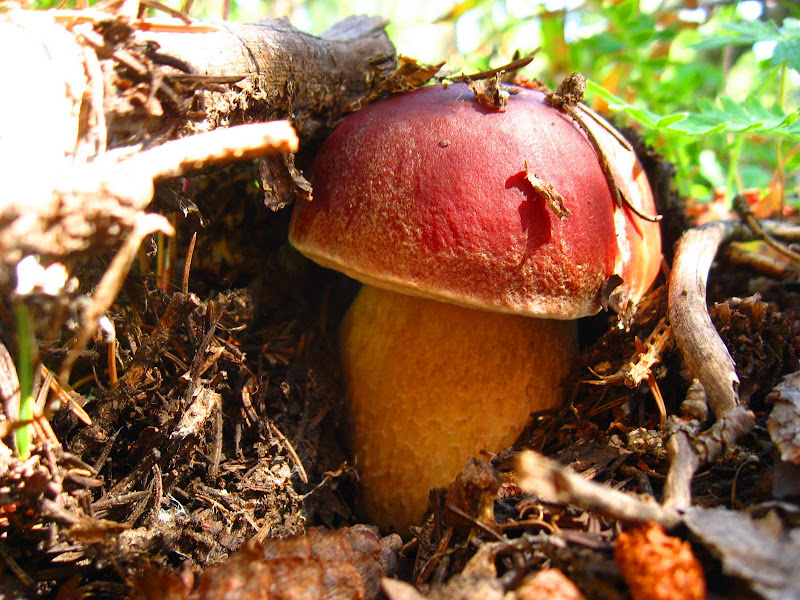 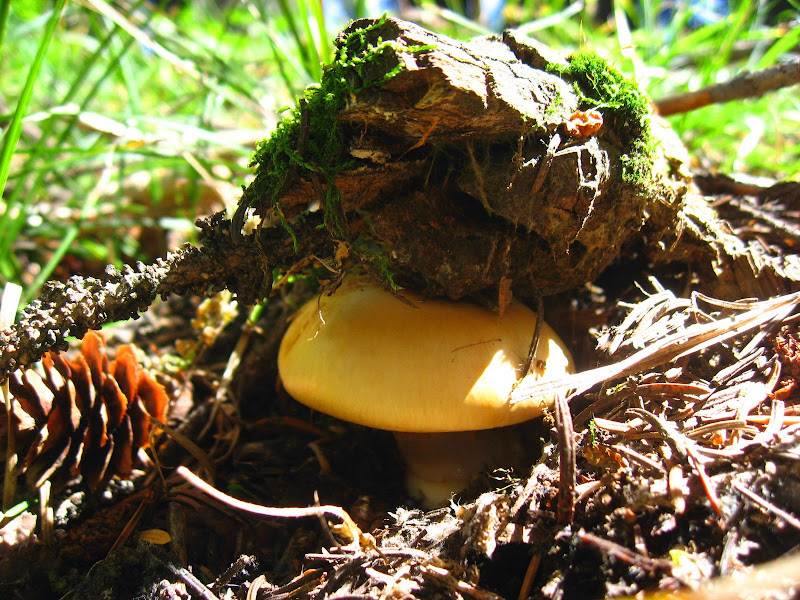 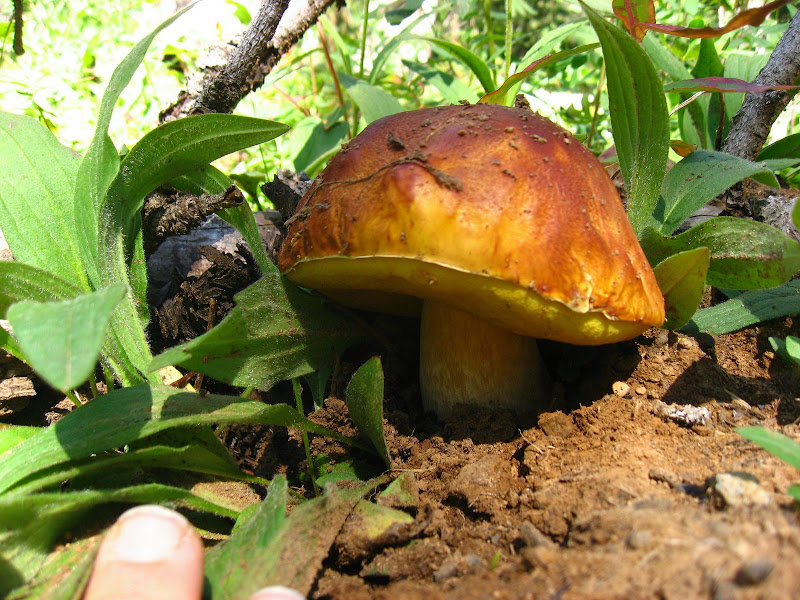 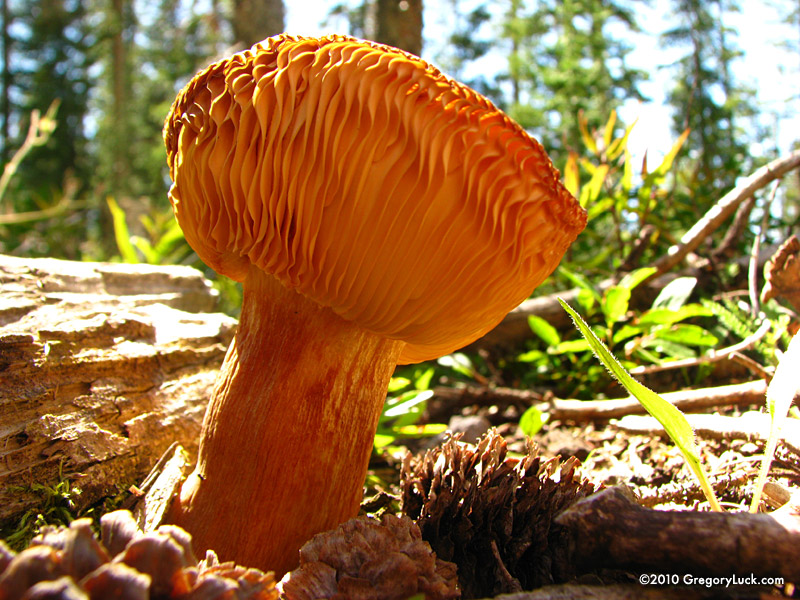 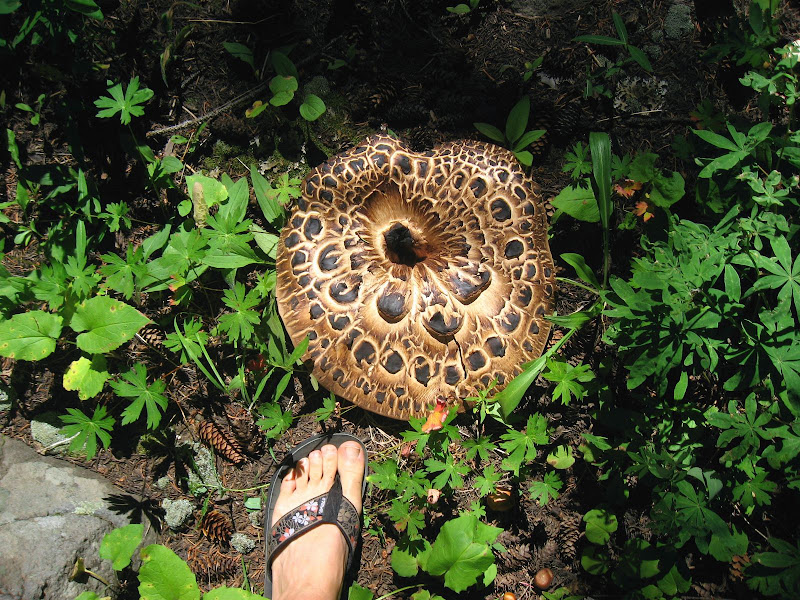 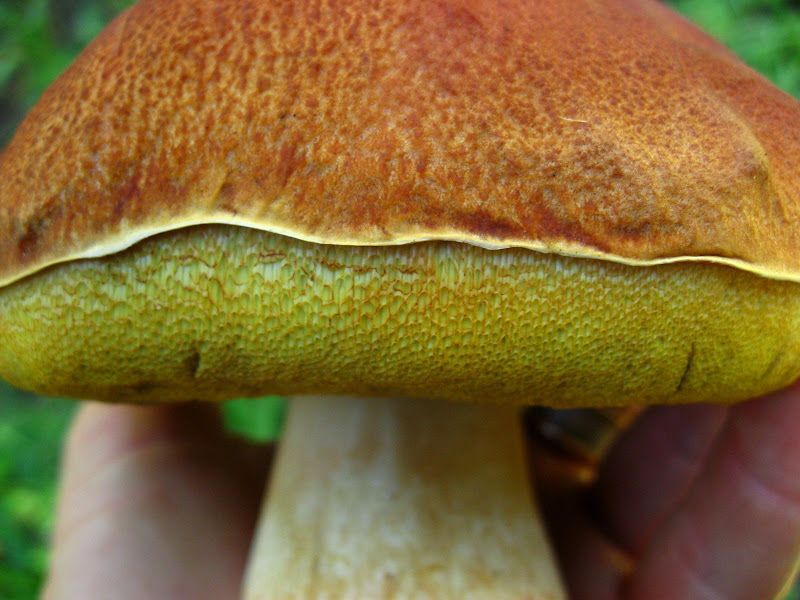 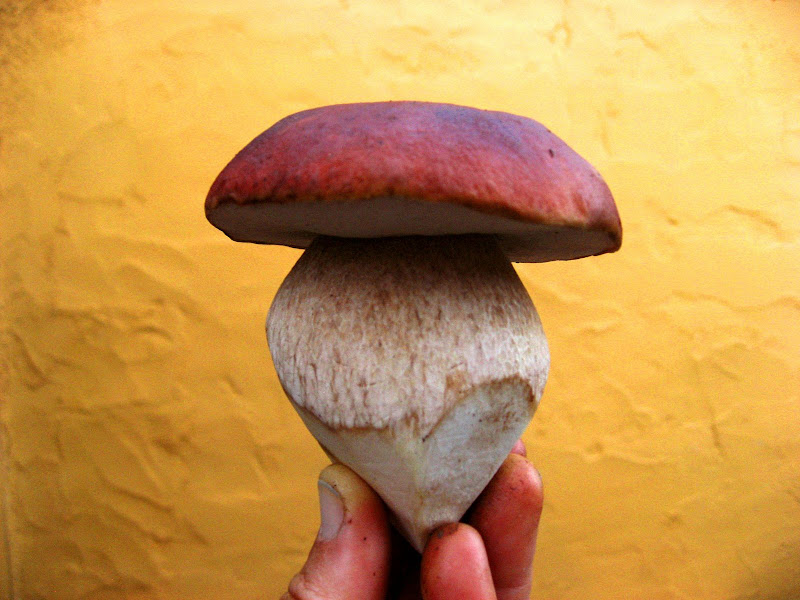 After watching someone's how-to-field-clean-boletes-video and the lesson learned from the hours upon hours of cleaning last week's haul at home because I didn't clean them thoroughly enough in the field, I added a soft-bristled pastry brush to the mushroom hunting tool belt and not only trimmed in the field, but also brushed each mushroom free of every speck of dirt, every pine needle, every strand of dried grass. 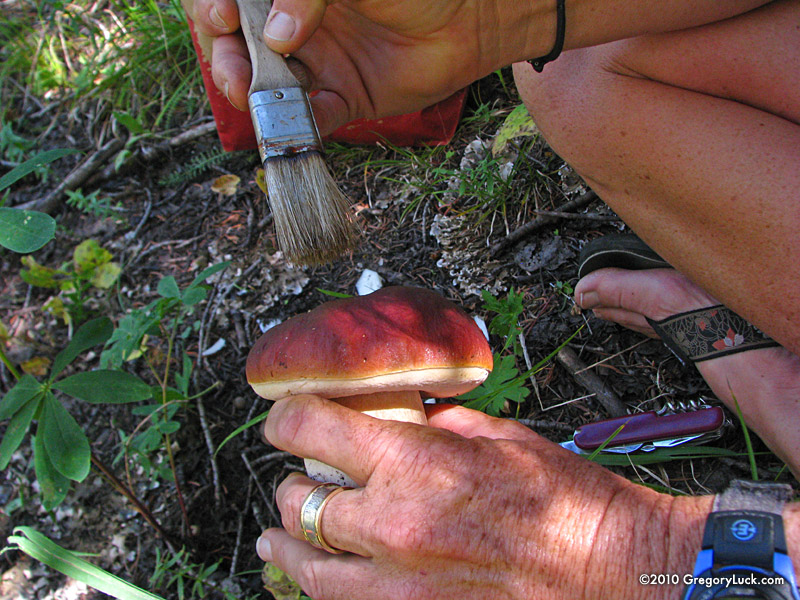 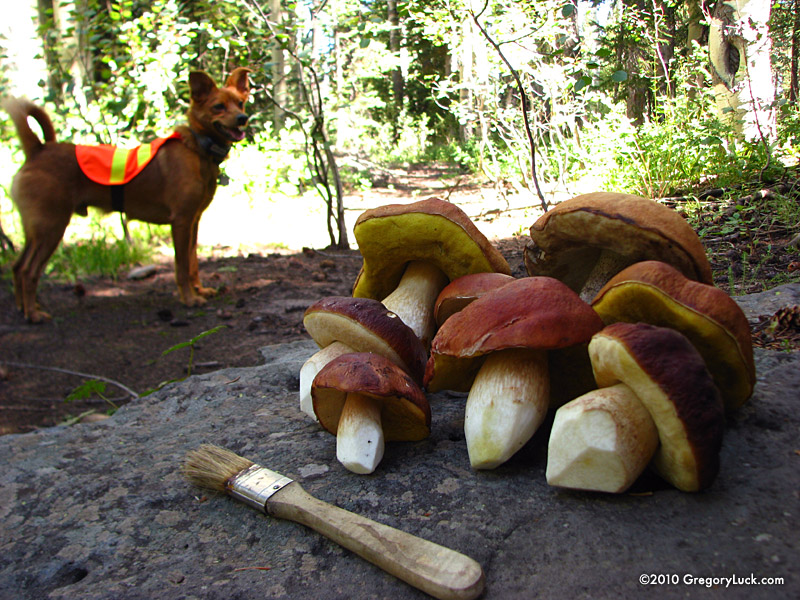 As most every activity in life is slightly modified right now due to The Cast, our special three-functional-arms-between-us mushrooming technique was this: I'd sit on the forest floor working mushrooms while the one-good-armed Greg and highly trained truffle hounds scouted and delivered single-armloads to my cleaning station, dropping them in a pile at my feet. Getting them clean (the mushrooms I mean, and your feet too I suppose) before you jostle them all about in bags makes for much quicker processing when you get them all home, which matters significantly when you're dealing with -- may I gloat? Just briefly? -- 42 (forty-two!) pounds of mushrooms. Having already done the cleaning in the field surely preserved a little of our sanity this evening; even so, tonight we sliced and diced and cooked until we dropped. Can you say "stroganoffallwinterlong?"

These do not go in the stroganoff: 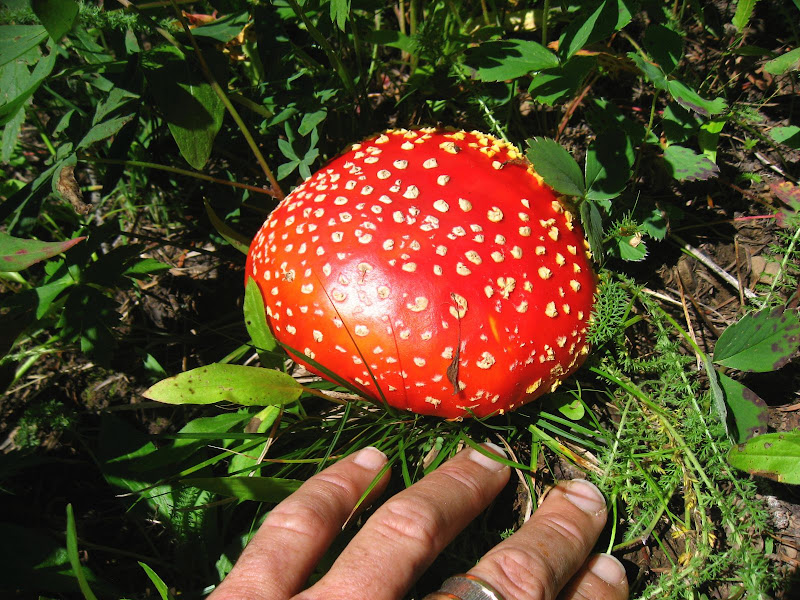 After we had decided we had harvested enough, if not too many, mushrooms...

... we actually did incorporate just a brief spin on the bikes down a safe, smooth gravel road expressly for the purpose of preserving Greg's sanity. 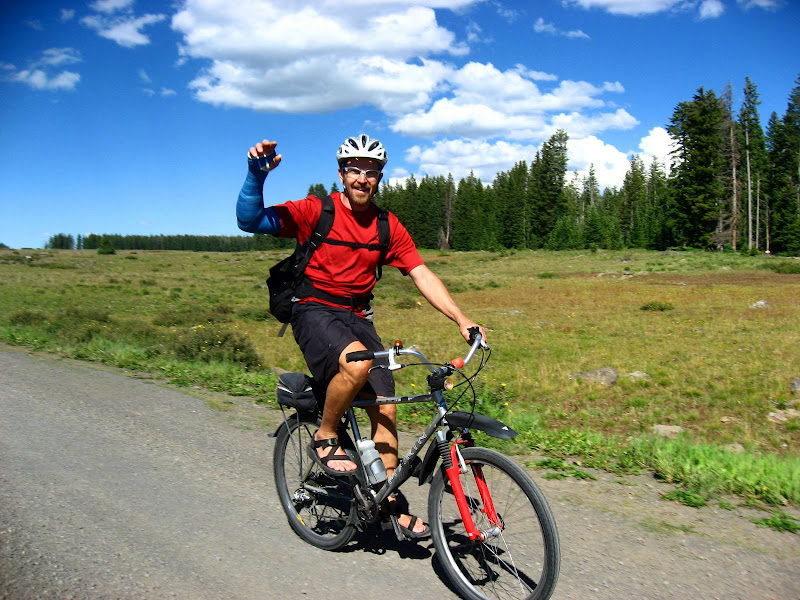 We kept having to lurch to a stop, however, dropping bikes in the ditch and bounding into the bushes when I spotted yet more boletes peeking out of the roadside undergrowth. 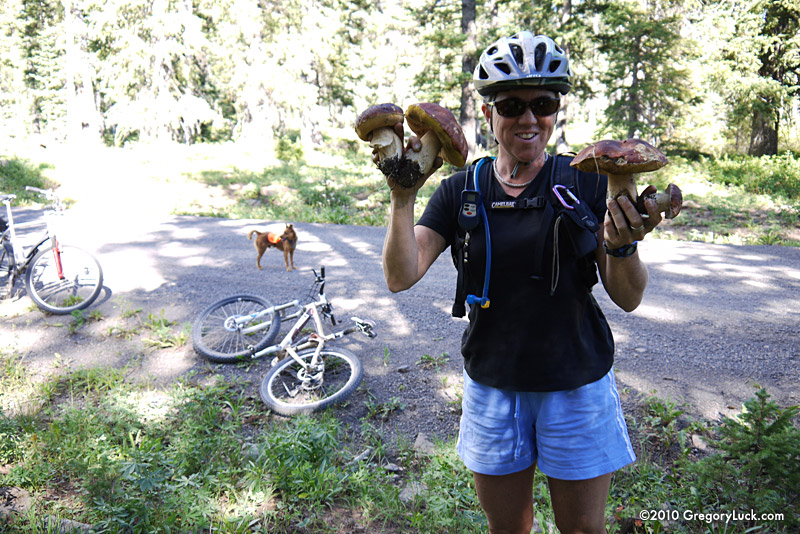 Lastly, a word of explantion is in order regarding Sprocket's Wonder Dog cape. He is a superhero. We aren't hiring him out as a crossing guard. He is guarding precious mushroom booty. He isn't Greg's service dog. He can now play safely in city traffic. He is a fashion maven. Mostly, we don't want him being shot for sport.

It may not be open season on game yet, but here in the Wild West, that doesn't stop truckfuls of not-so-gentle men from driving around on mountain roads with rifles and shotguns, shooting at anything that moves out in the meadows. Chipmunks, marmots, birds, little red dogs that look exactly like red fox bounding through the meadows hunting mice. Having encountered such truckfuls of men more than once on our adventures, we decided Sprocket needed a Wonder Dog cape, preferably in the lovely shade of "hunter safety orange." We find it a little embarassing, but worth it for our peace of mind, whereas Sprocket seems to be reveling in the super powers it affords him.
Posted by Sweet Solitude at 9:40 PM