"I can't think of why I wouldn't want to do that."

That's what I said when Mike asked me if I'd like to join him on a tour of the new Dixie 311 Self-Supported Mountain Bike Race course. Tour. Meaning that we'd be going slower than a race pace, taking more naps, more photos. And that we'd have time for Mike to do some fly fishing along the way. More or less 311 miles connecting 5 pieces of high country in Utah's Dixie National Forest. Mike loaded the route into his GPS.

Off we went to Southern Utah, to Cedar City, and then up the canyon to the race start. Six racers lined up and took off. I didn't get the best look at them, but they looked sinewy and capable, and their bikes and kits looked light and efficient. The reason I didn't get a very good look was because I was still trying to jam what I needed into stuff sacks and to figure out how to get them strapped onto the bike.

A few minutes after the "crowd" left, we were on our way. Mike - a former racer - had a kit that appeared at least as efficient and sleek as any of the racers. Mine, a bit helter skelter, and crowned by a rather bulbous backpack where I'd stuffed everything else. A week of largely unknown riding was ahead of us. We soon caught up with a napping Lee B who'd started with the racers but was also going at Tour pace, and who rode with us for much of the route. 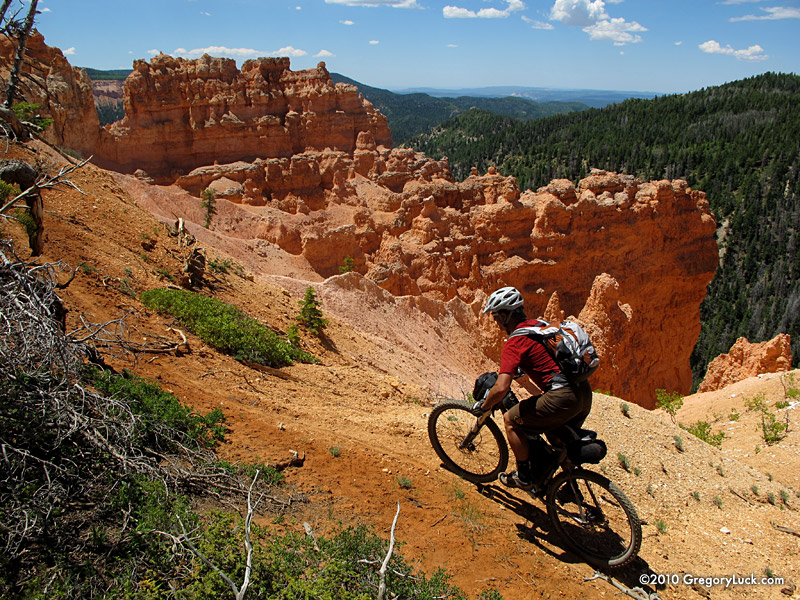 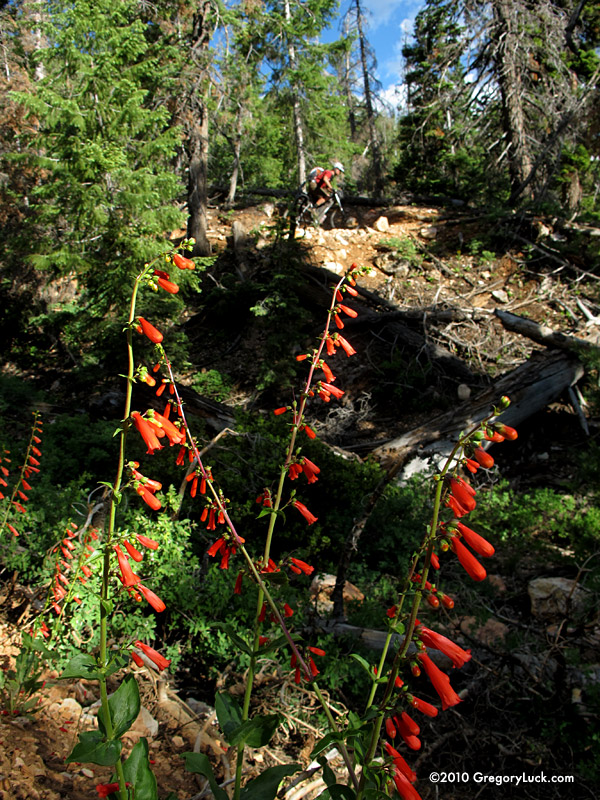 The first three days were brilliant. Meadows of bluebells and larkspur and red penstemon. Pink cliffs and spires above and below us on the Virgin River Rim Trail and the Grandview Trail. Roller coaster singletrack with a few technical sections and some powdery push-a-bike sections. Near the end of day three, we rode the swoopy and scenic Thunder Mountain singletrack, where we burned turns amid more pinkish hoodoos and spires. 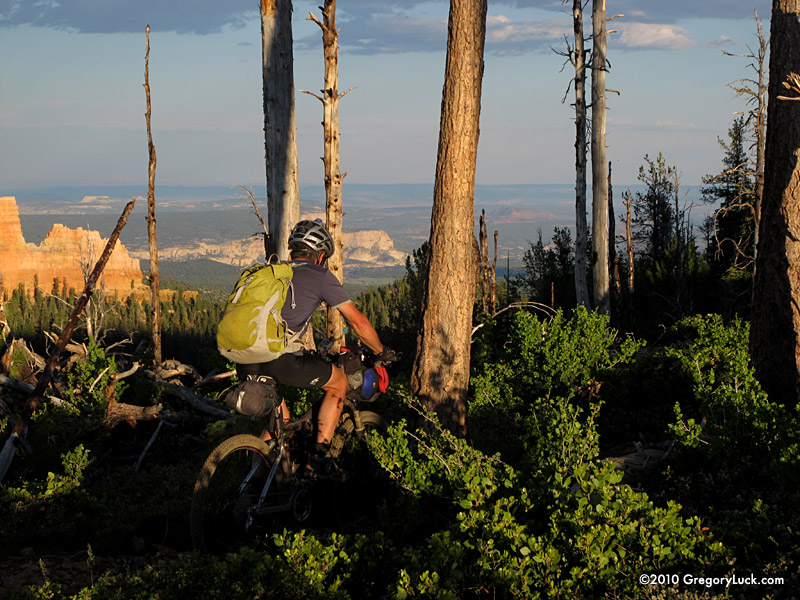 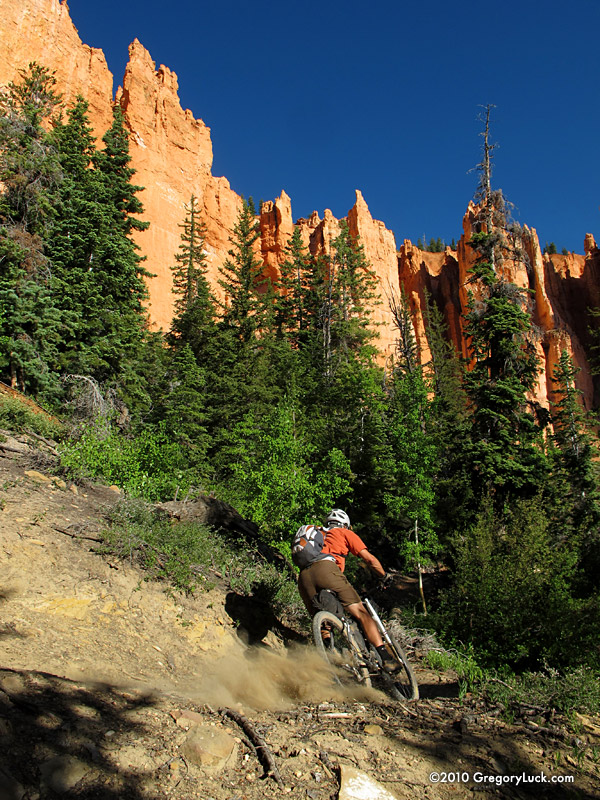 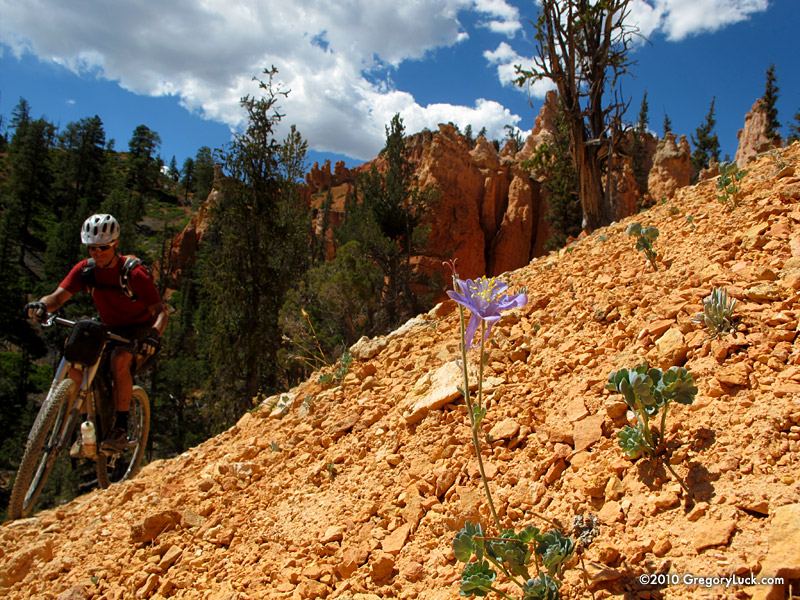 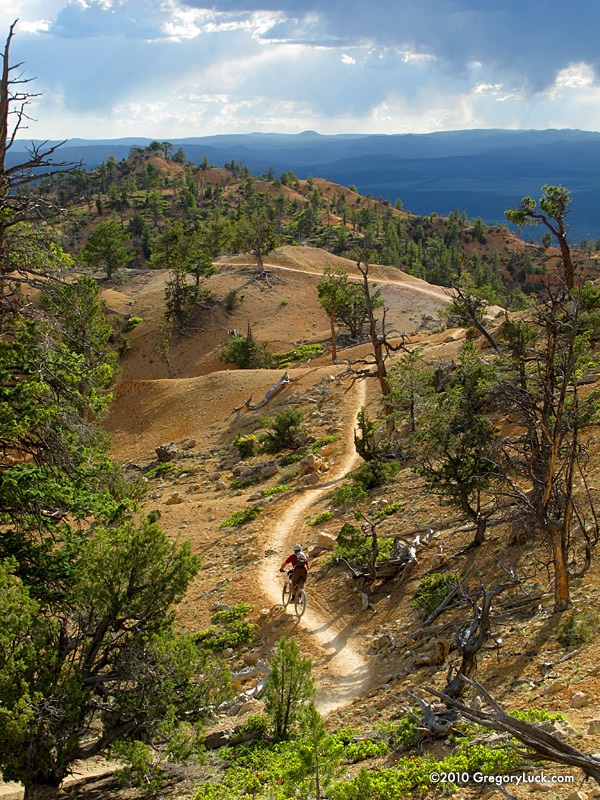 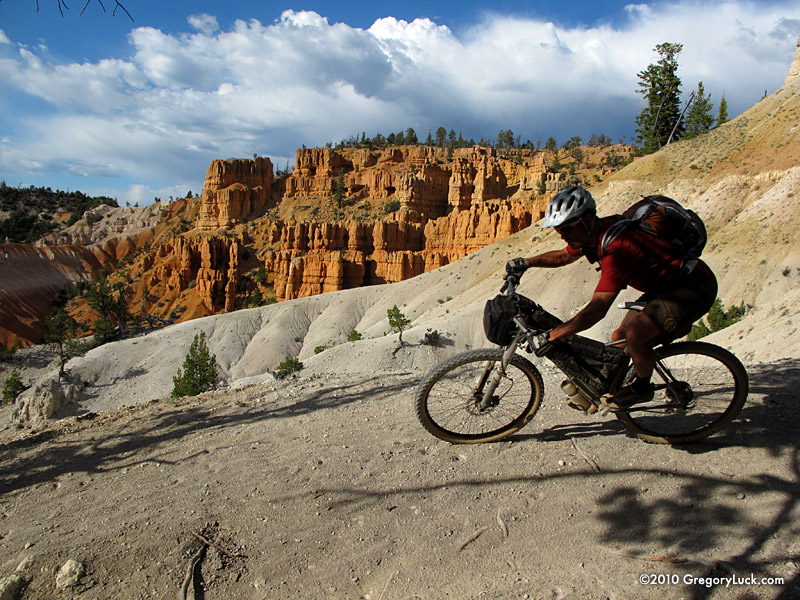 Food, drink, and lodging were provided by, well, us. Mike had fabulous home-recipe freeze dried meals, but wasn't above eating a delicious pepperoni and Frito-dust "wrap". Lee and I carried slightly less elegant forms of lunch, dinner and breakfast. Water was available from creeks, springs, and small pools. Our camps were simple affairs: light sleeping bags on inflatable pads. With a tarp strung over if weather required. 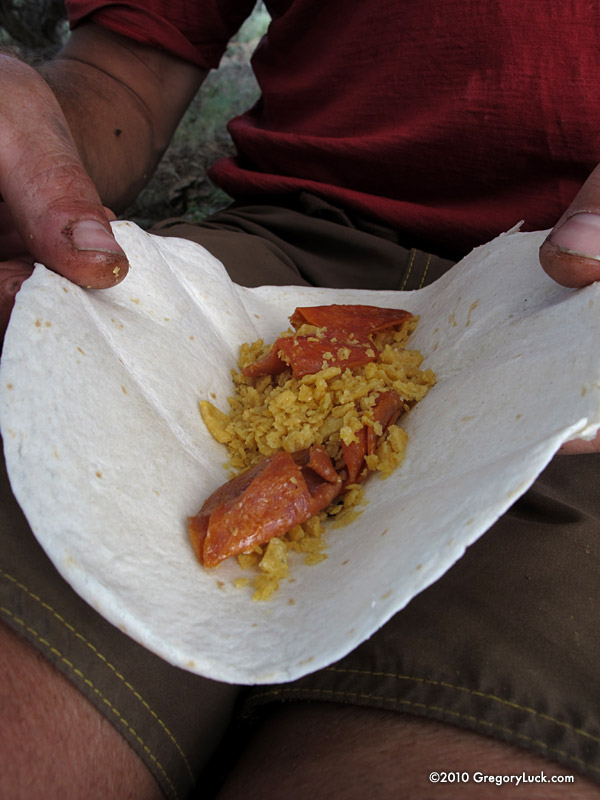 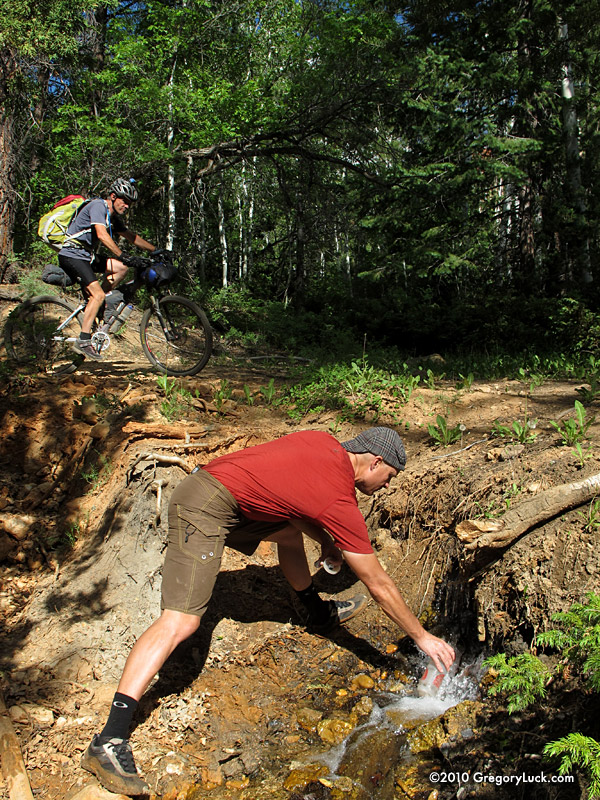 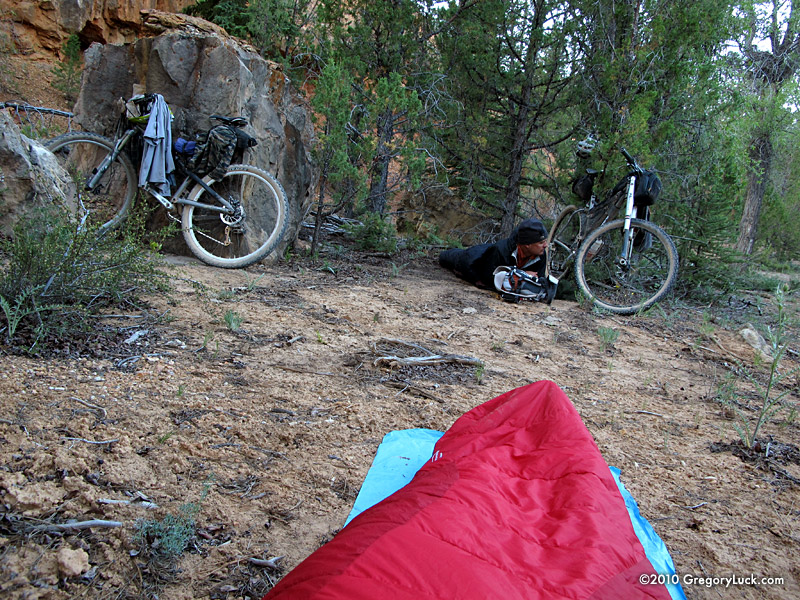 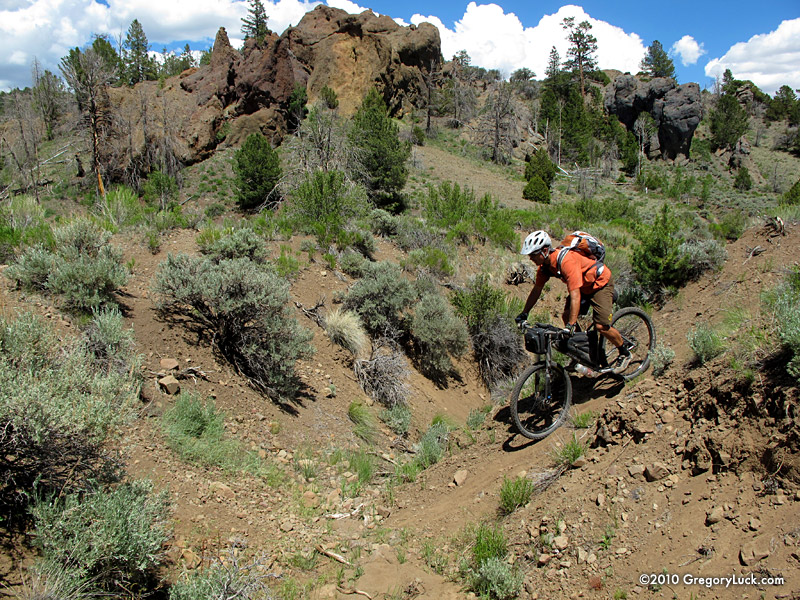 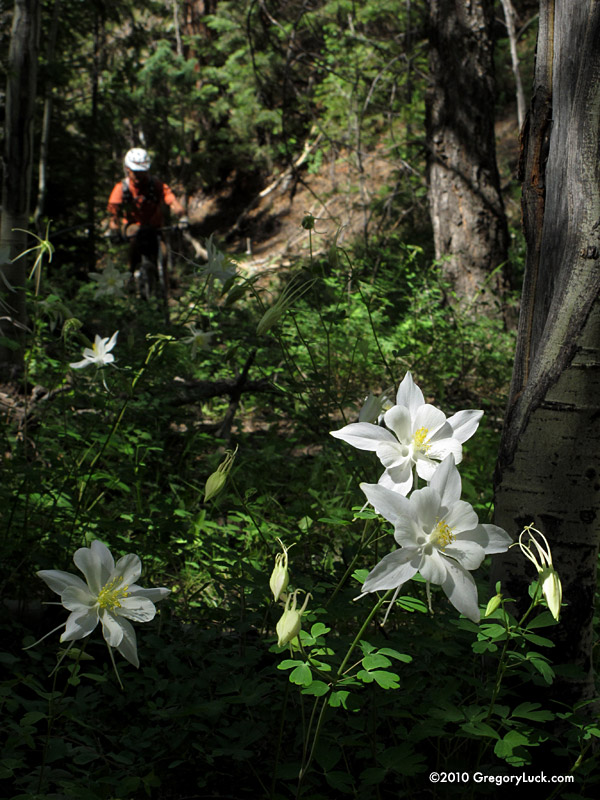 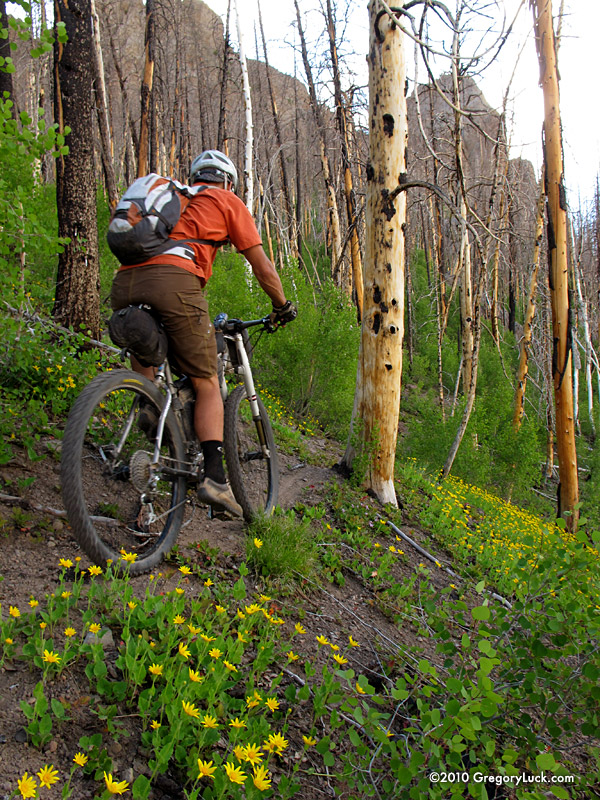 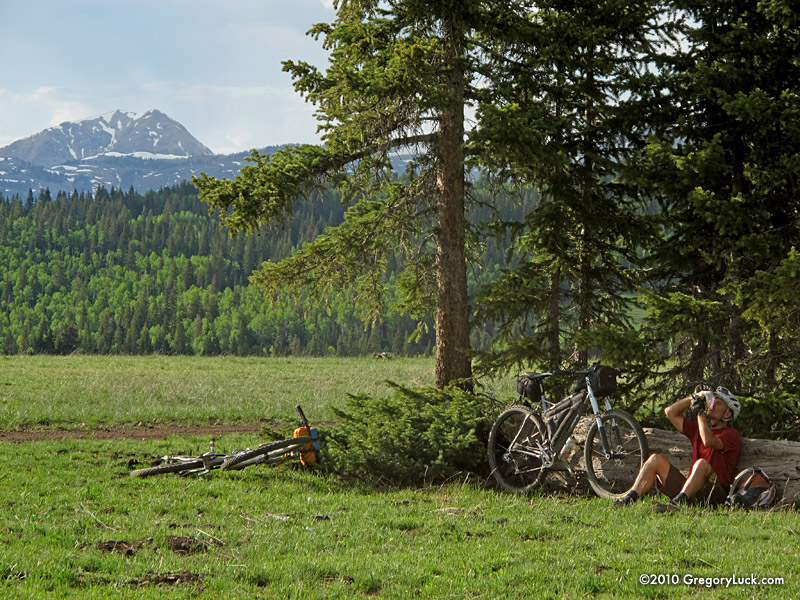 On Day Four the Route got tougher and stayed that way. For hours each day we pushed up steep trails, rode through slashing bushes, and dragged our bikes over and under deadfall logs. Many of the trails were obscure, decaying, or lost altogether. Broken wood popped like kindling under our tires. Often, after pushing our bikes to the top of a ridge, we'd find that the trail down the other side was so loose and rocky that we'd have to hang on for dear life and slowly sketch our way down. Only the red line on the GPS kept us on track. Further delays were caused by our tendency to take naps in green meadows. And to have to lift our bikes over our companions who were taking naps, or who had fallen drunk onto the trail. 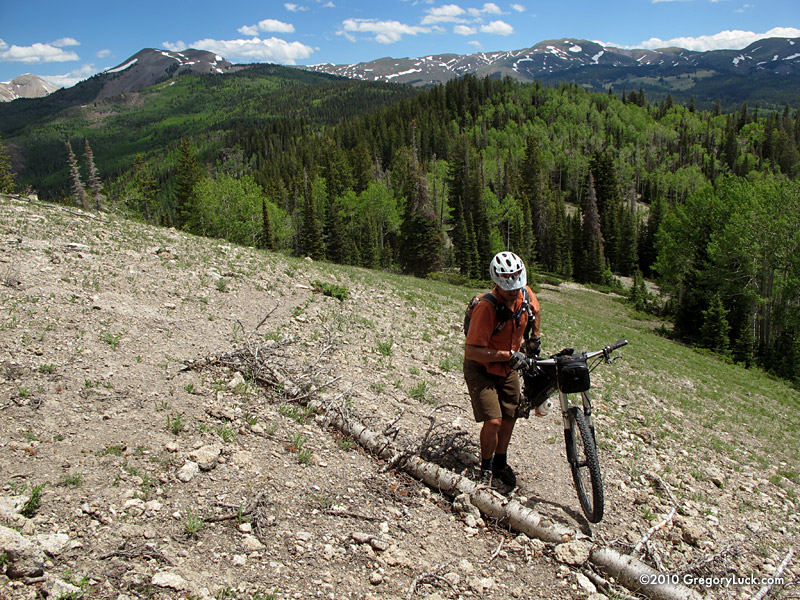 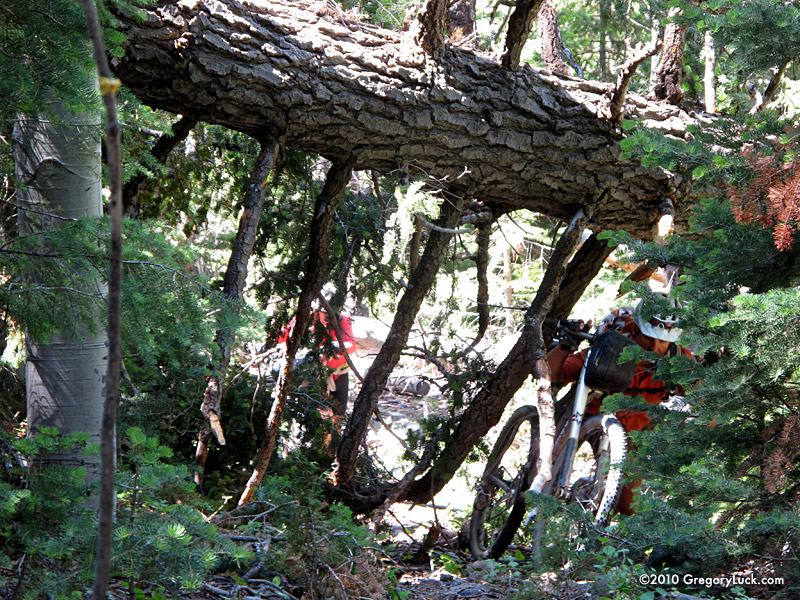 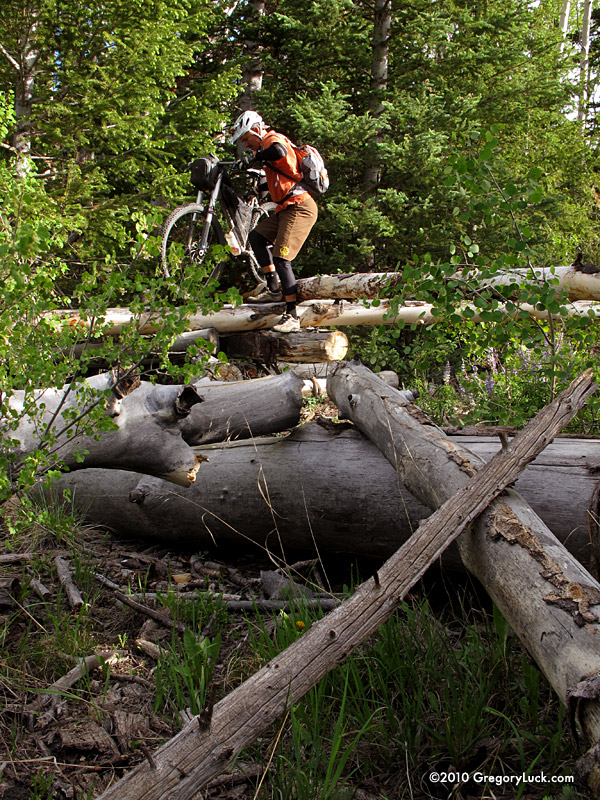 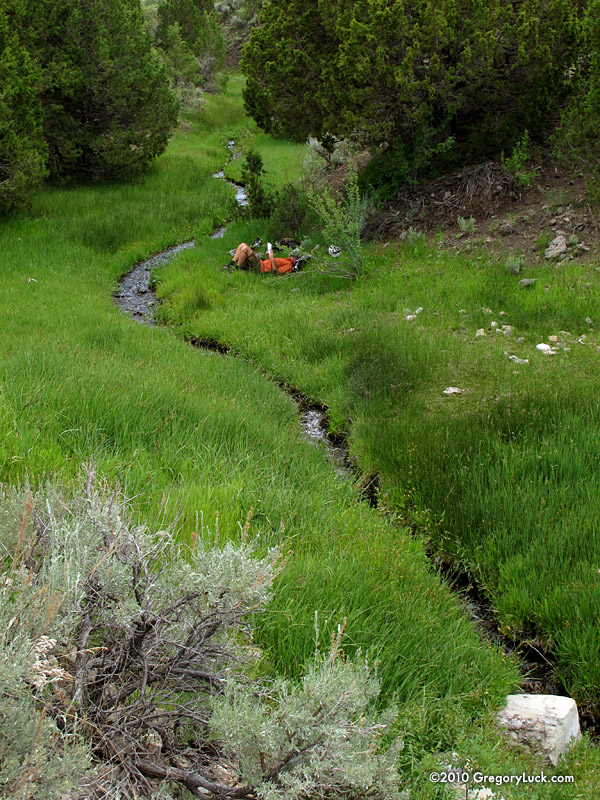 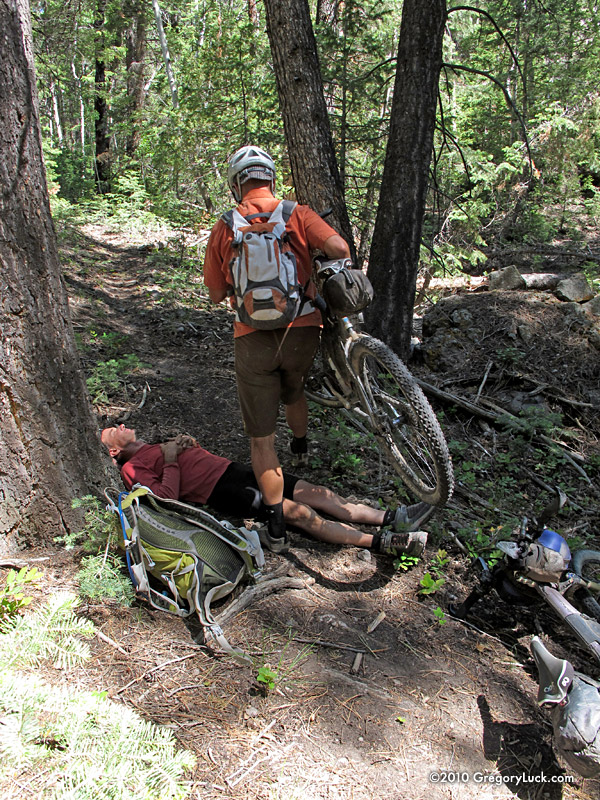 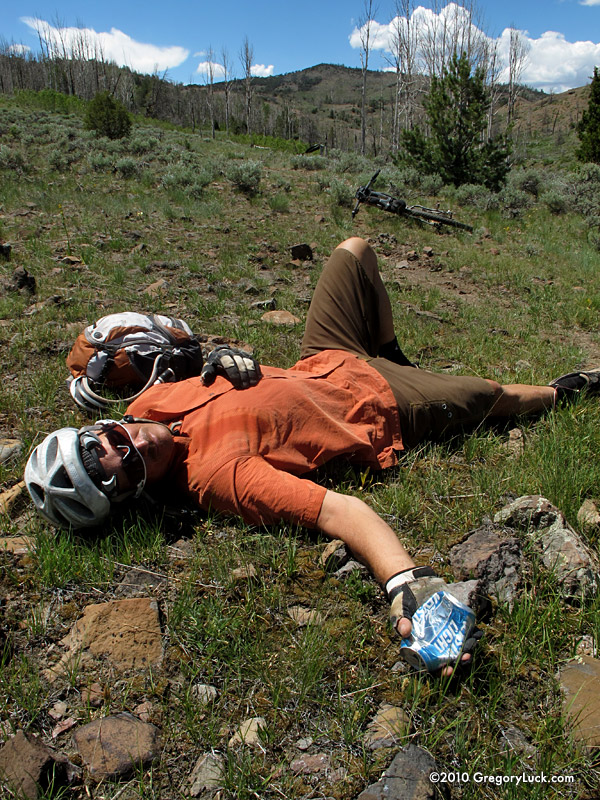 There were also miles and miles of open fire roads and ATV tracks. We lost thousands of feet of elevation and then gained it painfully back, bouncing between valleys as low as 6000 feet and peaks as high as 11,000 feet. At around the halfway point we passed through Circleville, the one serious re-supply on the Route. (We'd gone past a gas station on the morning of Day Two.) We tanked up on greasy breakfast, salty snacks, and gummy bears for the days ahead.

We passed over the fire-scorched desolation of the Sevier Plateau where dead stick trees pointed to the sky, or lay fallen across our path. We rode and pushed and climbed upward into the alpine meadows, forests and snow-painted peaks of the Tusher Mountains. More deadfall. Many stream crossings. We covered miles of open but uninspiring track through hotter pinyon, juniper, sagebrush country where lizards sprayed off both sides of the dirt as we passed. 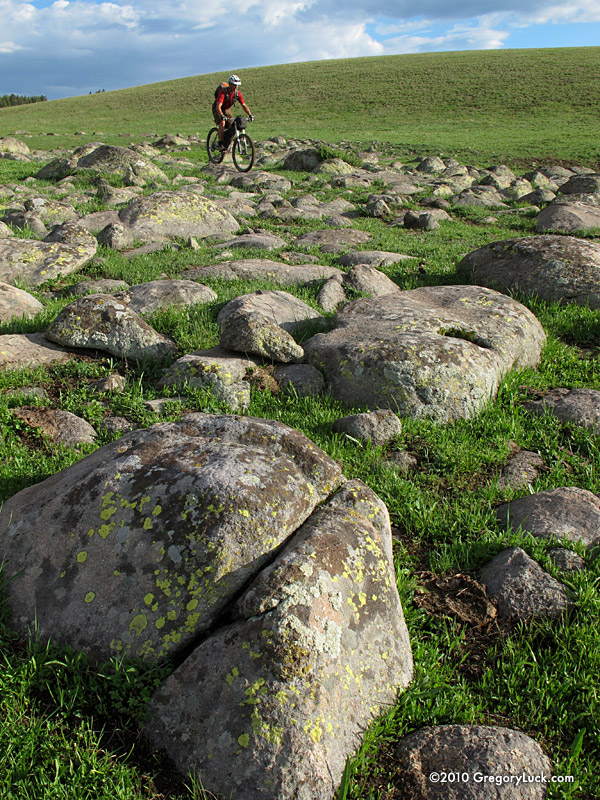 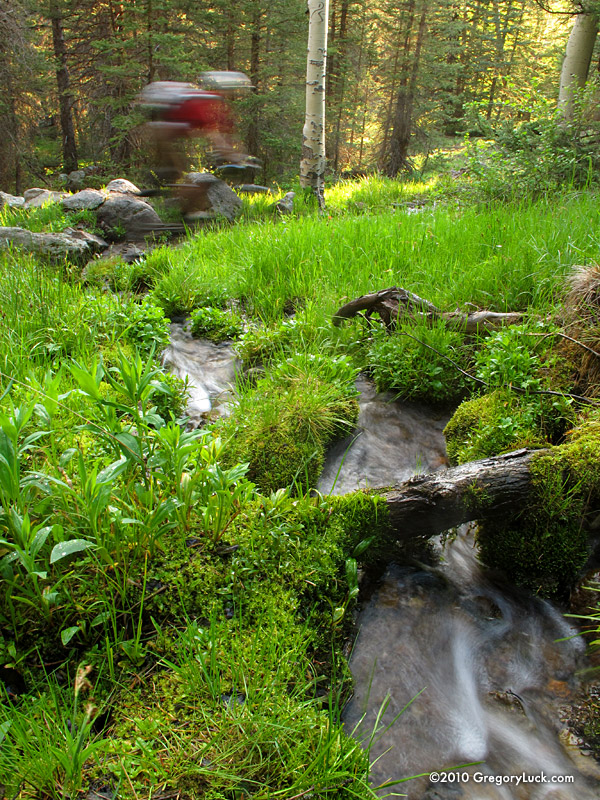 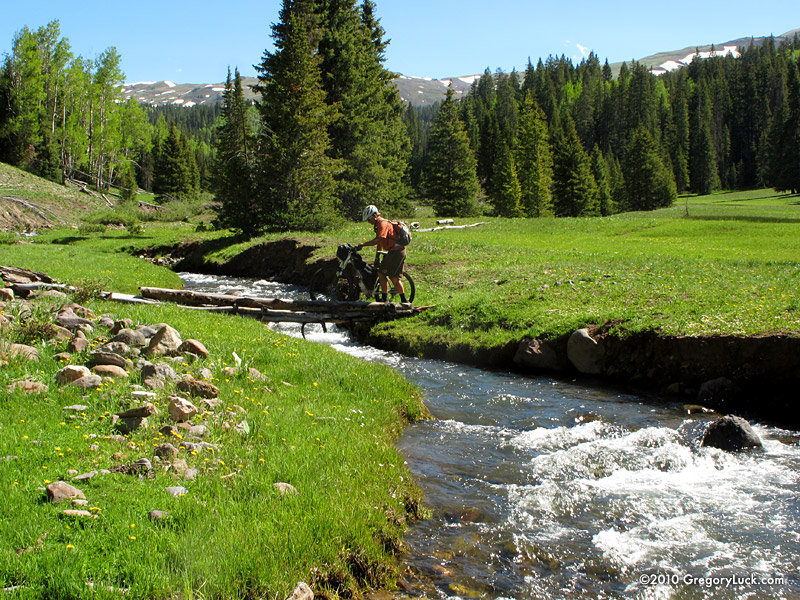 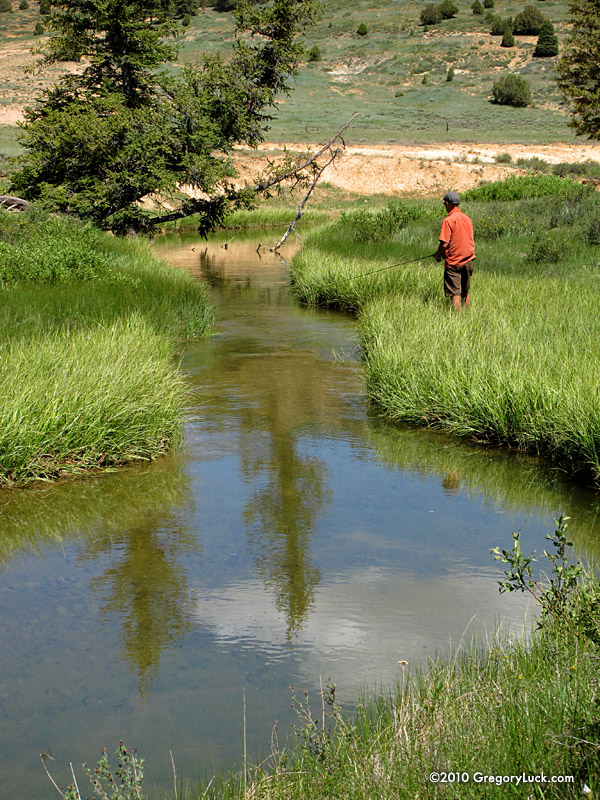 Lee was ahead of us, but his tracks left the route one evening and we didn't see him again. Though Mike and I napped and rested along the way, and took photos nearly constantly, most of our days were spent on the move. From around 8:00 in the morning until 9:00 pm and dark, were moving. He only fished on two days, and caught several fish, all too small warrant eating. The combination of miles, elevation, roughness, deadfall, and the lack of ridable singletrack all wore us down. By Day Eight, the last day, we were tired, saddle sore, a bit grumpy. 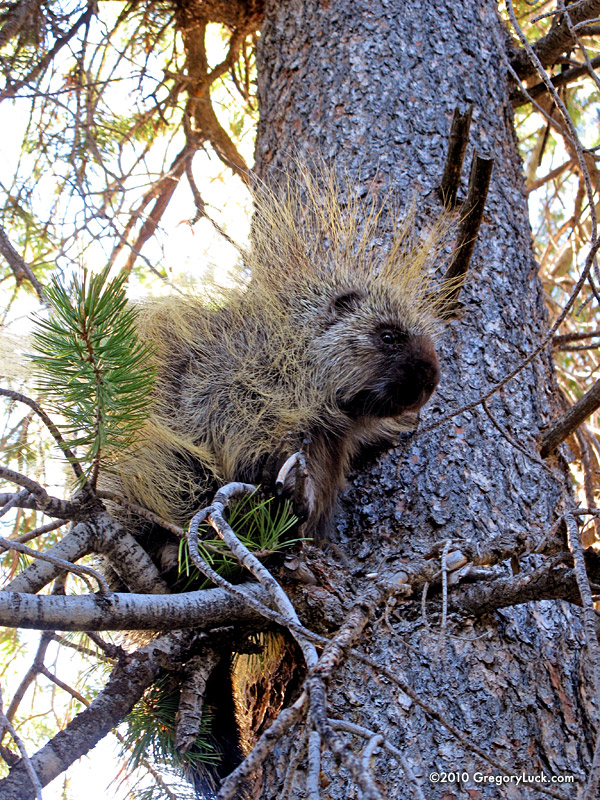 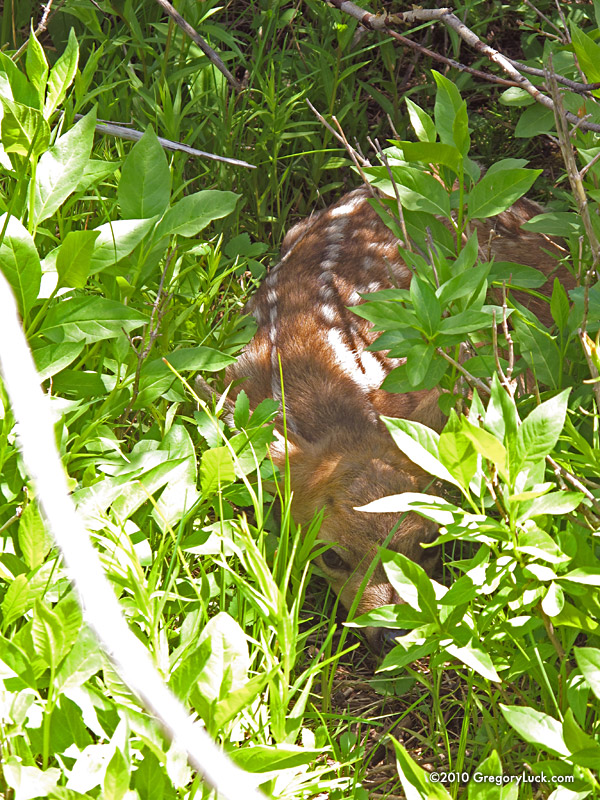 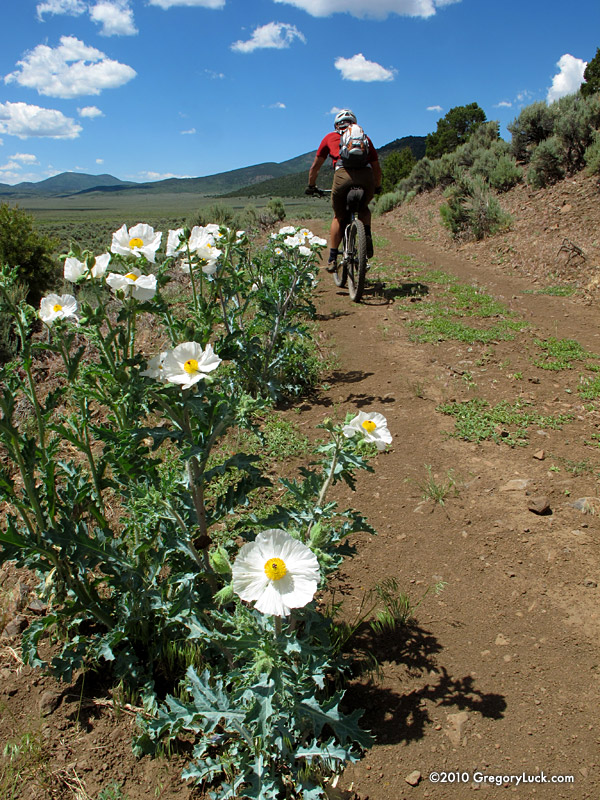 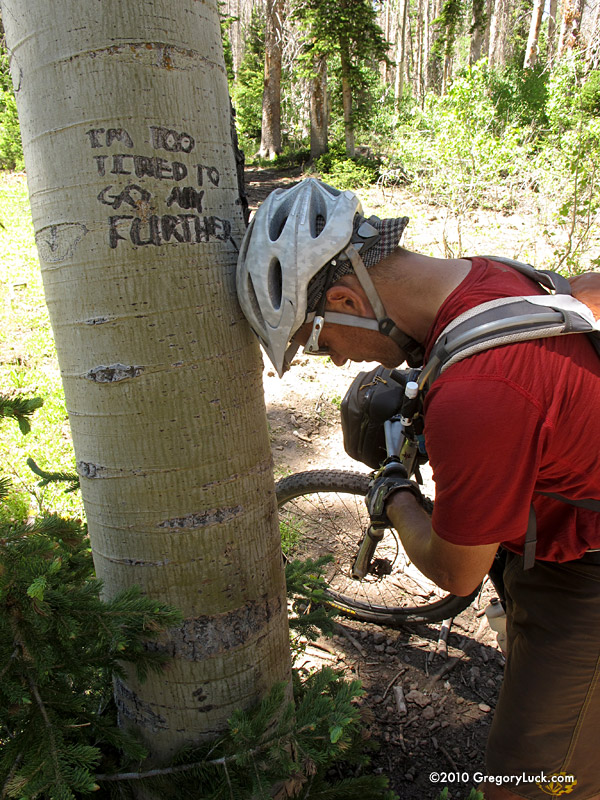 More deadfall on the Marathon Trail and then some trail so infested with mole tracks that it was barely rideable had us almost ready to short-cut down the highway and be done. But we dragged ourselves onward until we hit the first stretch of the Virgin River Rim Trail that we had ridden on the way out.

This final reverse stretch of roller coaster singletrack, open forest, and lush flowered aspen groves revived us a bit. We zipped an zoomed and finished with smiles.

The time had come. My legs had lost their spring. My butt was sore. Back aching. Knees creaking. But more importantly, the cup was full. It doesn't happen very often. But I had managed to get enough mountain biking. I was ready to head home. And we did.

Update 8/1/11: Mike just posted a vid of his photos from this trip. Take a look! 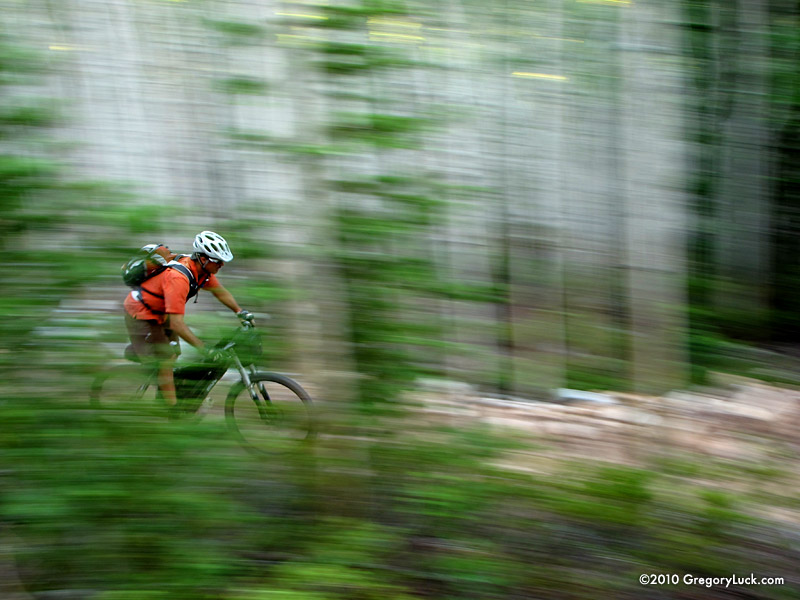 Posted by Bikeabout at 2:12 PM