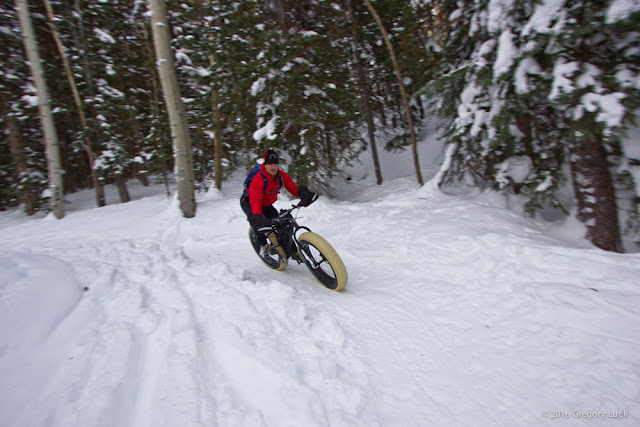 I thought it's probably time to share these photos. Now, while outside it's raining cold rain that may turn to snow. While it's probably snowing in the nearby mountains. But before the pockets of snow melt off the north side of the lower mesas. Before the wildflowers run rampant. (We've already seen a few.) Before spring arrives and thoughts turn away from the winter fun. So...

In December, Mike once again invited me on a snowbike adventure. Nothing went as planned. I should not have been surprised. Of the, oh, five snowbike "rides" he's invited me on over the past few years, they pretty much all went like this one.

We loaded up bikes, packed for single-digit-F camping (or what we hoped would work for single-digit-F camping) and headed down the trail. Riding? No. Pushing our bikes. Because that's (apparently) how it's done. We pushed our bikes through snow too soft to ride. And while pushing, often plunging knee deep, thigh deep, hip deep or even deeper where the snow was too soft to walk, either. This we did for about 4 hours. Only very rarely riding, usually deep in the trees where the snow was more solid. But even this riding involved a tightrope-like concentration of balance and weight distribution, but with way more falling. Falling which created a large hole in the snow that one was then obliged to claw one's way out of.

After these 4 hours, we realized that it would take another 4 hours to arrive at a trail that was (supposedly) packed hard enough to actually ride. As it was already getting dark (and colder) we changed the plan. We'd just backtrack and cross to a firmer trail that would take us out another way. So we turned around and slogged back through the soft snow. Managing to ride a little bit more, due to the cold hardening the trail, plus the snow stamping we'd done by slogging the same trail on the way out. But mostly we post-holed our way back. Then did some riding -- some actual riding, slow, ponderous riding -- on the firmer route that led out. This quick escape route "only" took another 2 hours or so. By the time we were back to a trailhead, we were cold, tired and somewhat demoralized. And we realized we didn't have anything to prove by staying out any longer, so we hit a piece of frozen highway that took us back to our cars, loaded up bikes and drove home to our warm houses. 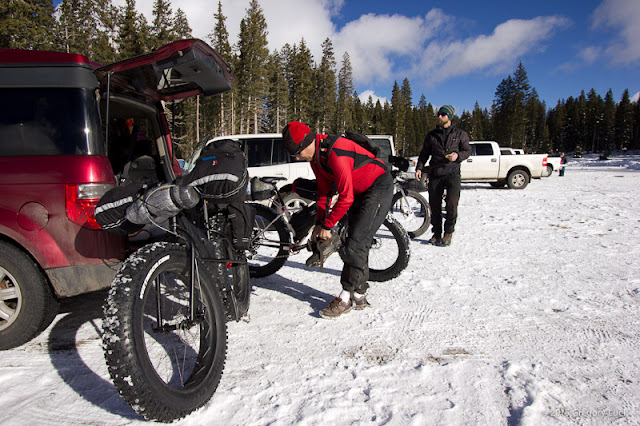 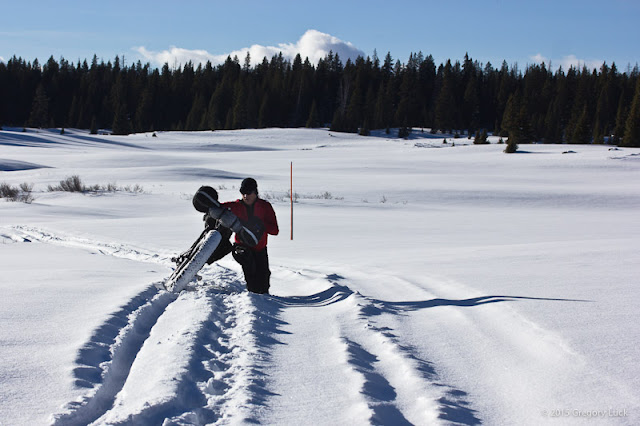 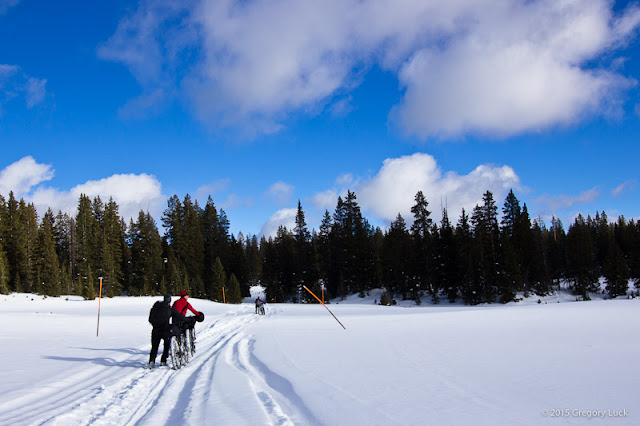 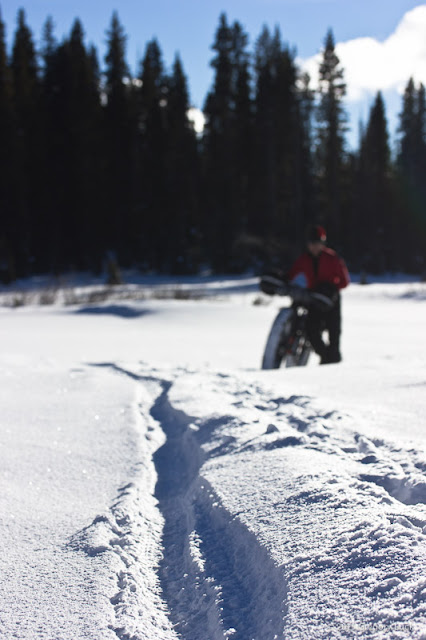 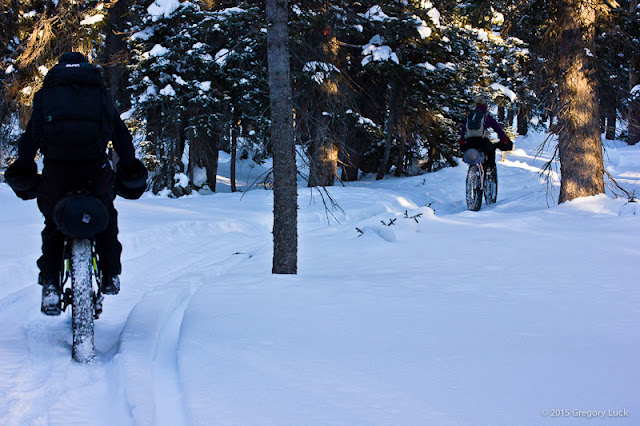 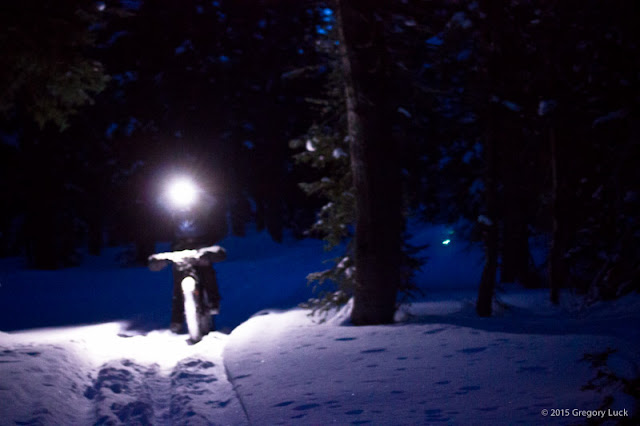 In early January, Mike invited me for another trip up the mountain for a day of snowbiking. I, fool that I am, accepted. And this time it was all that he's been promising (and failing to deliver) for all these years. The singletrack was well packed by all the folks who had gotten snowshoes for a holiday gift, and had driven up the mountain to try them out. The wide snow tires of our bikes could zip along quite nicely on the soft-yet-packed surface -- though still with some care, as the un-packed sides of the trail were always ready to grab a tire and suck it in, sending the rider into the deep, soft snow. But overall, it felt very much like riding a bike! And was even fun, in that pedaling/swooping/zooming way that riding a bike is! The weather was freezing but "warm". There was a spot or two of sunshine. And if Mike could somehow guarantee that it would always be that fun, I'd definitely go back up with him. 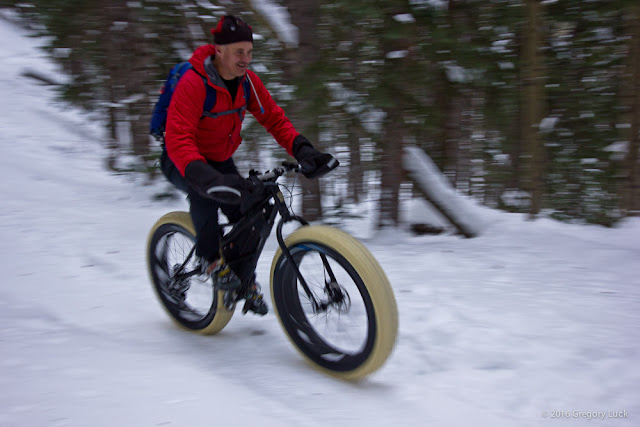 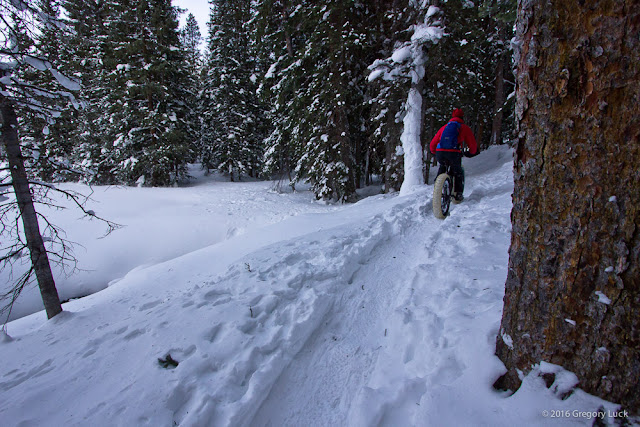 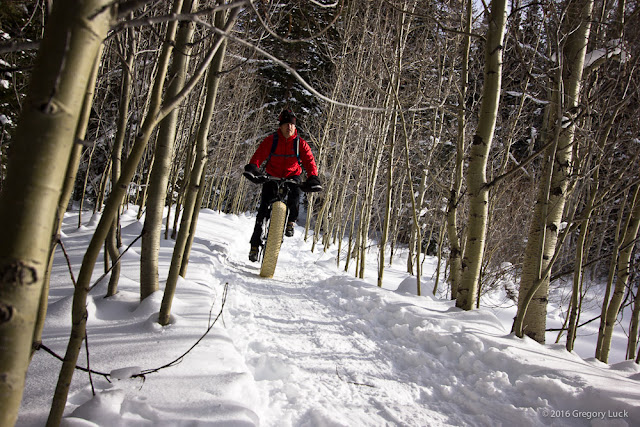 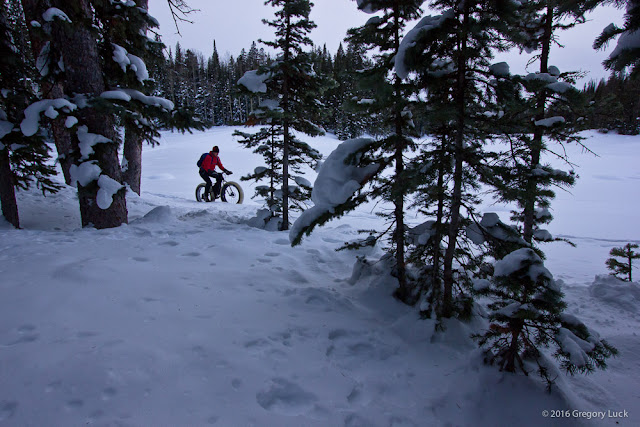 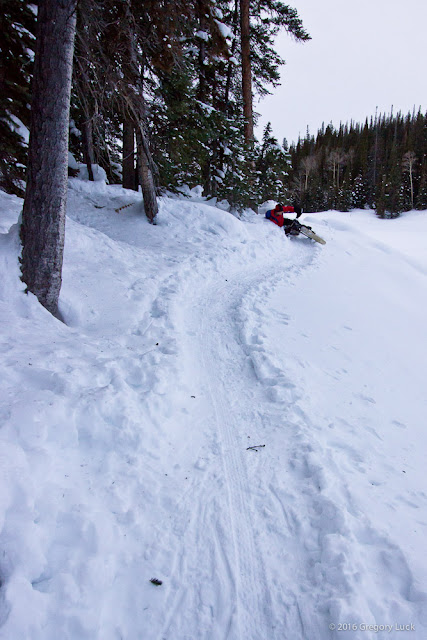