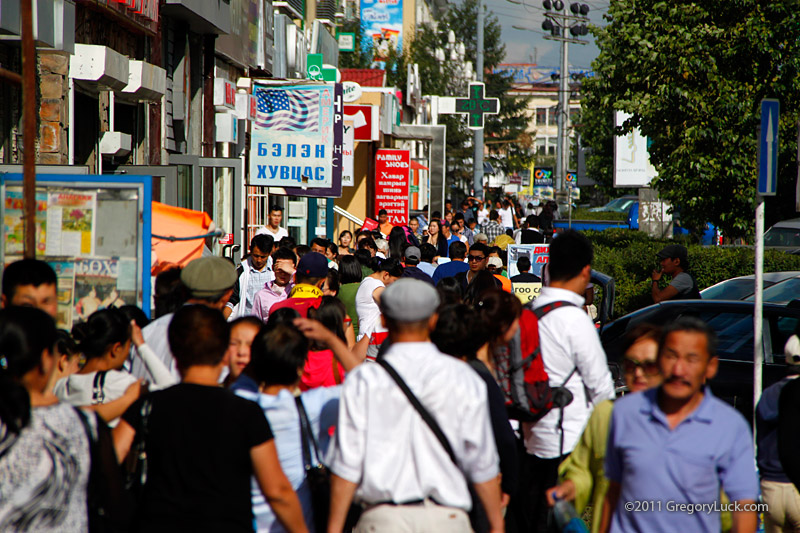 Words and photos by Greg

The Mongols are most famous for exploits that took place 800 years ago when the horse-mounted nomads took over most of the world. (Or so I hear. I wasn't there.) The people are justifiably proud of the accomplishments of their forebears, but their connection to those times has grown thin. Today Mongolia seems to be charging forward from centuries of less dramatic history.

The most visible charge of the modern Mongol is that from a grass-and-muscle powered rural lifestyle to an oil-and-gas powered urban economy. Close to half of Mongolia's small population now lives in urban centers. The dominance of animal husbandry is giving way to mining and market economy. Mongolia is at an interesting crossroads in its history. These photos give a sample of the mix of tradition and change that are affecting the people.

Note: If you've missed the previous posts about my mountain biking trip to Mongolia, please see Mongolia by Mountain Bike and Mongolia: Shadows and Light.

Our van driver "Kamakazi" poses in a battle helmet. I'm unsure whether the ancient Mongols would have had less or more reason to smile. 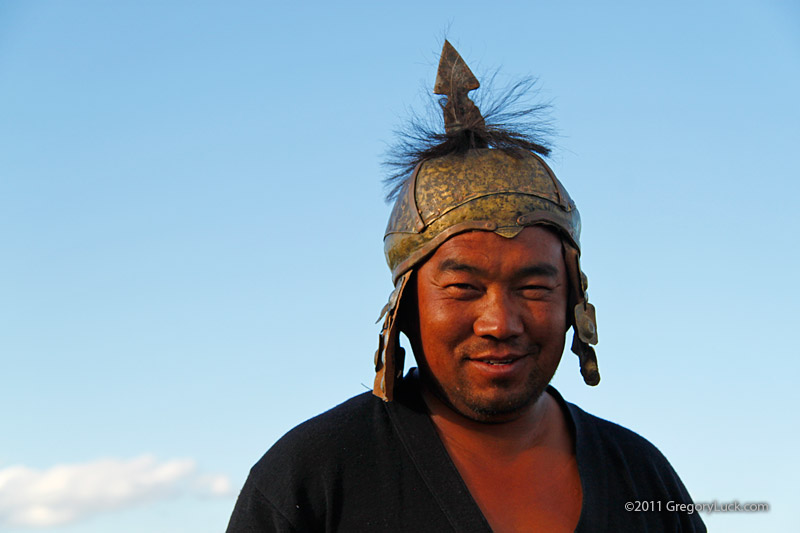 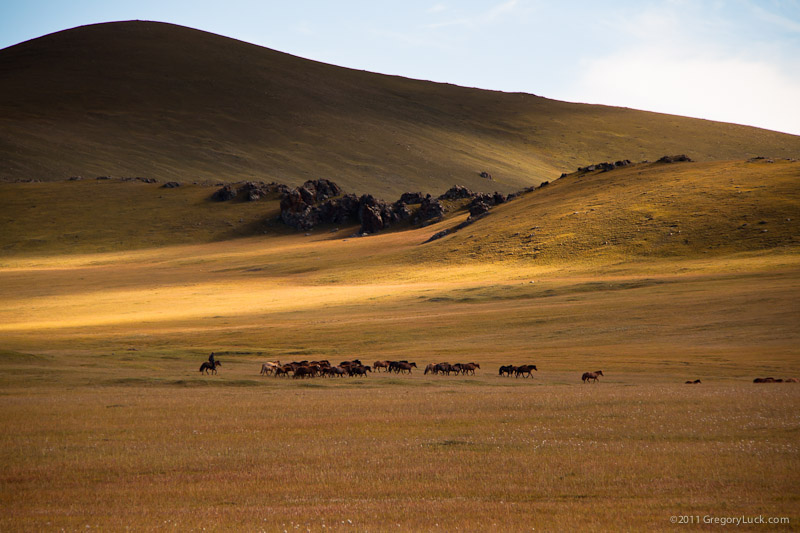 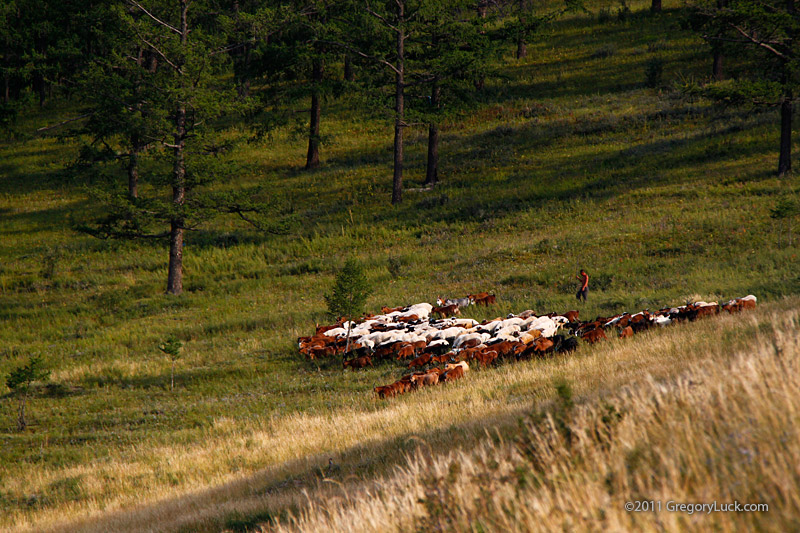 In Ulaan Baatar today, the common herd is automotive. 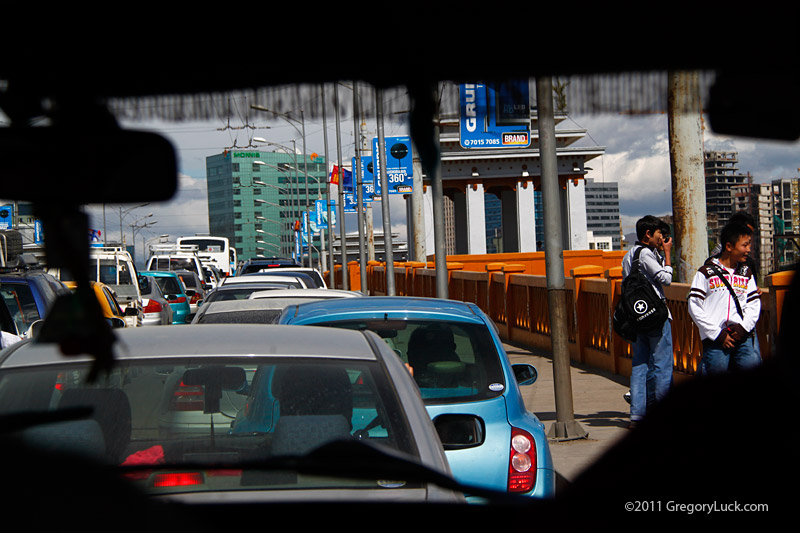 For many Mongols, wide open spaces have been traded for the grey Communist angles of the Soviet-inspired city architecture. 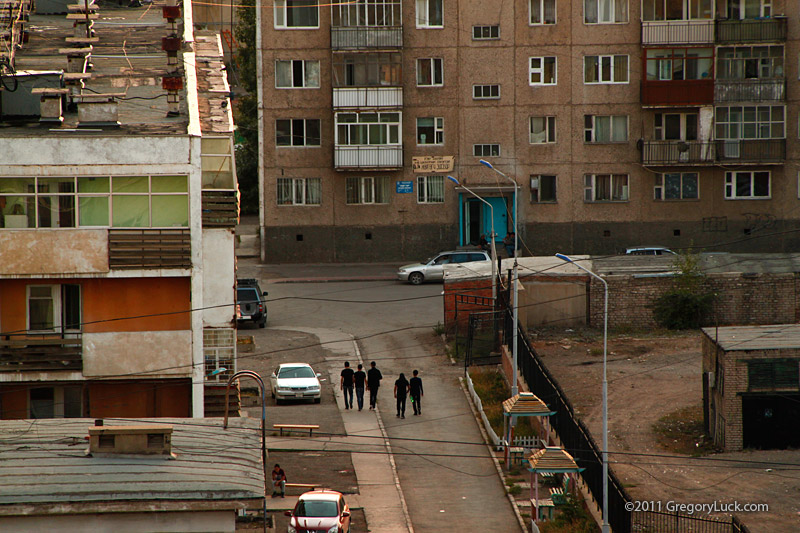 Reliable transport in the traditional sense. 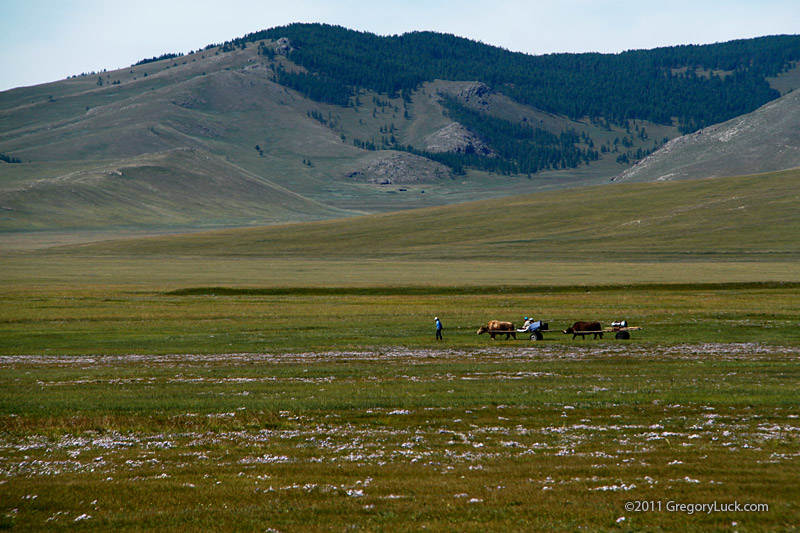 A resurgence of Buddhism has followed the change from Communist rule. 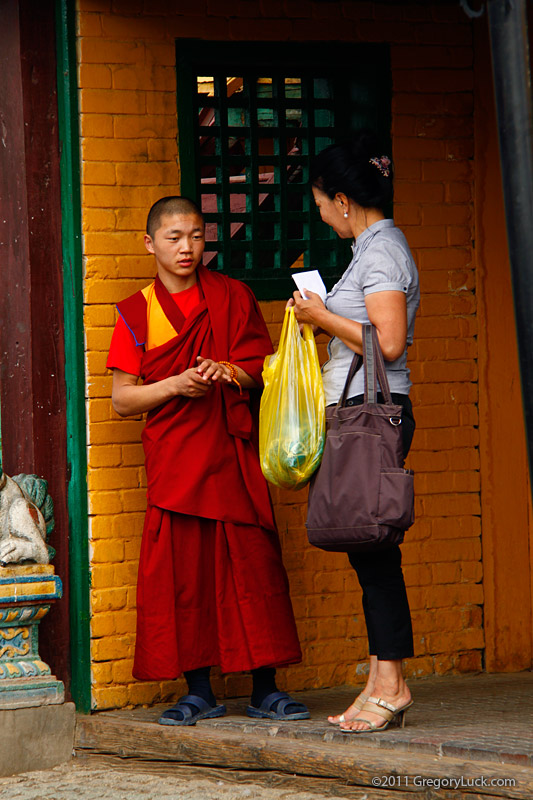 We witnessed the pageantry of the Mongolian Honor Guard, here preparing to welcome US vice president Biden whose visit seemed to be based on the possibility of Mongolia storing US nuclear waste. 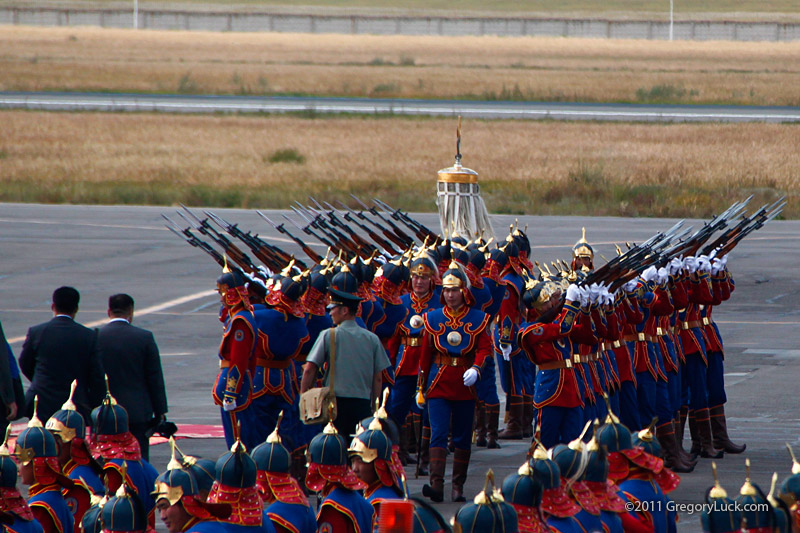 In the countryside, I saw a mix of horses and motorcycles used for both transport and herding. 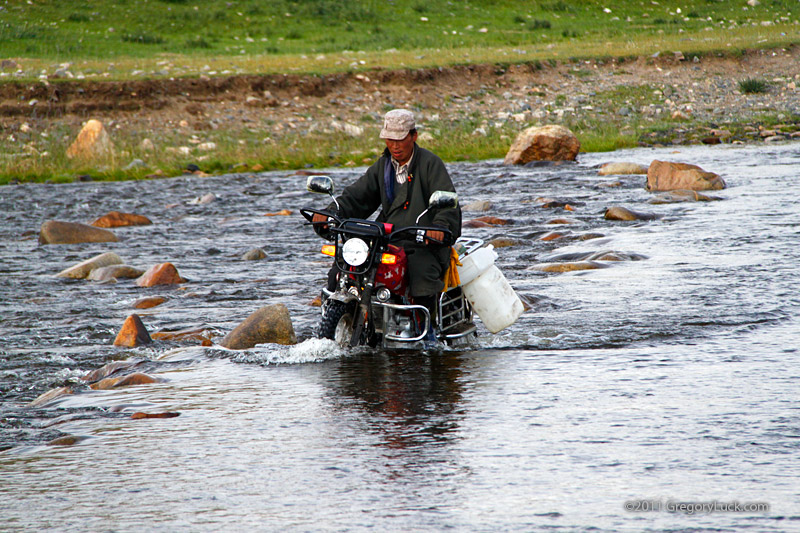 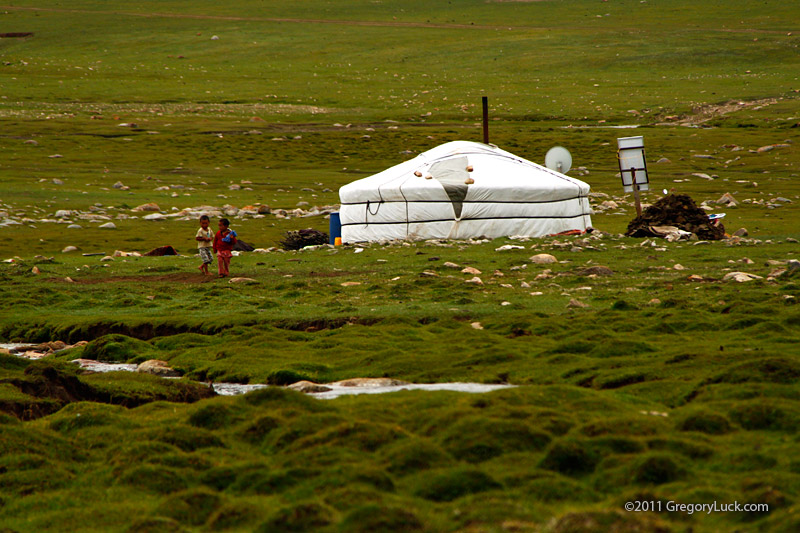 While we camped one evening, this gentleman came strolling across the steppe to our camp towing his son in a toy armored vehicle. He stayed to visit while our mechanic worked on our bikes. 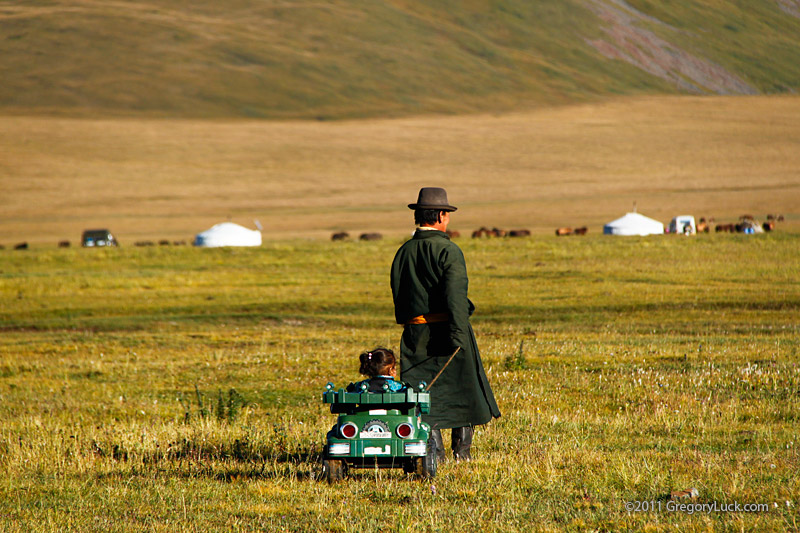 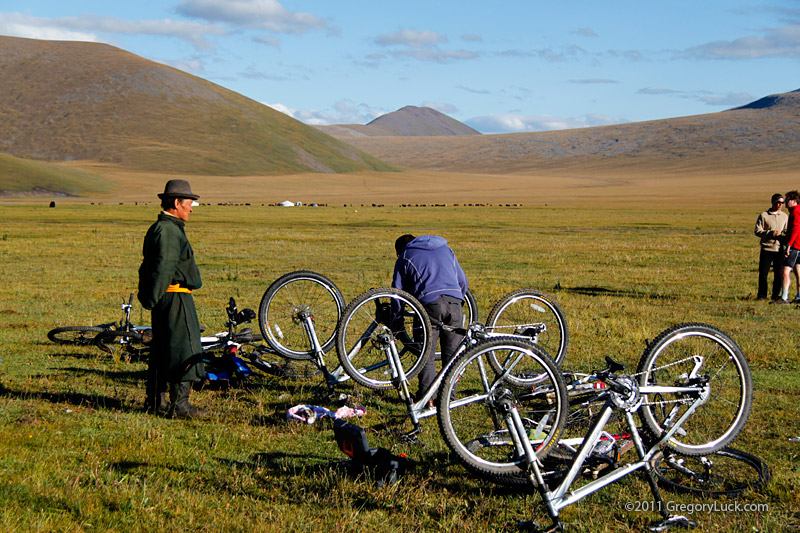 One fine day we came across a local festival. There was no visible "town" of any kind. Just a small collection of gers and a crowd of people and horses. The kind locals invited us to attend, inviting us into the festival tent where we probably broke every social rule as we partook of airag (fermented mare's milk) and an assortment of cheeses and meats. 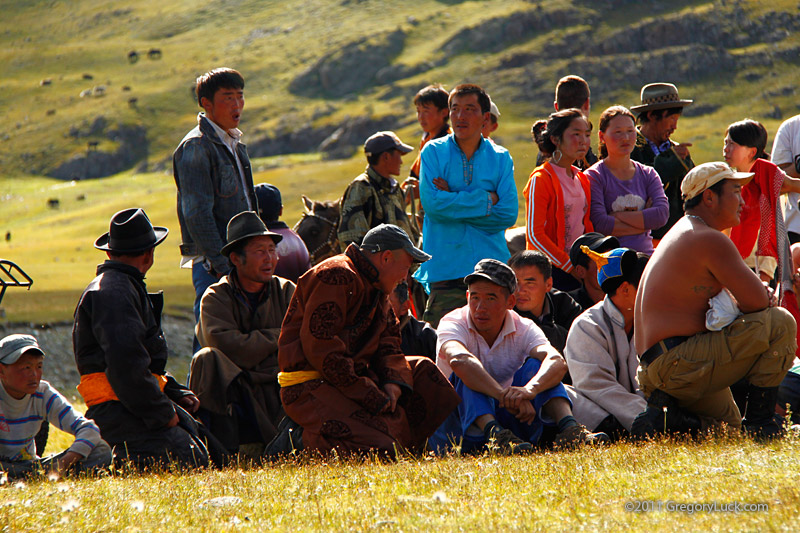 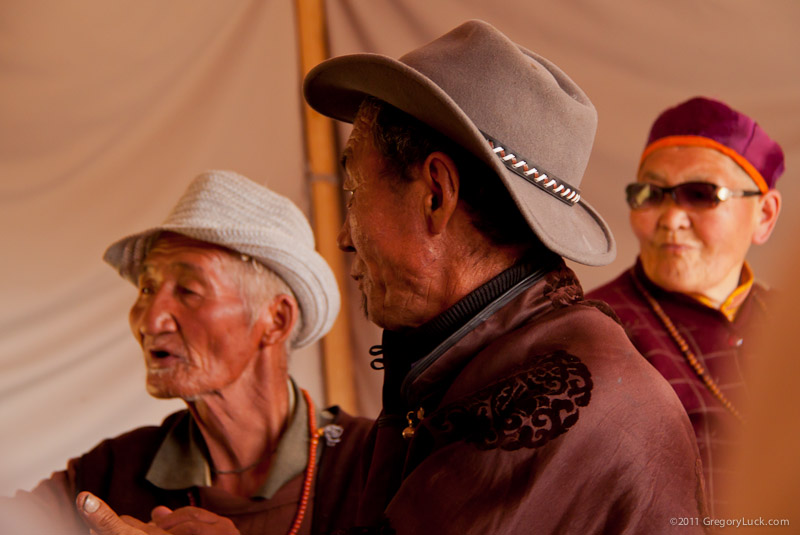 We watched traditional Mongolian wrestling. The wrestler on the left wears official wresting attire, but this competition allowed any attire. Note the judges who hold competitor's hats. (Unofficial explanation for the open-fronted vests of the official outfit is that it "keeps the women out" of the competition. The men don't want to get hurt.) 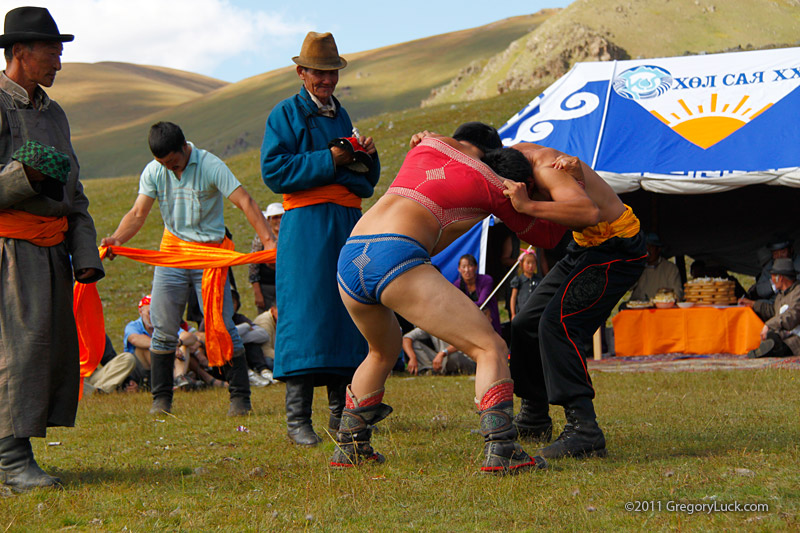 We had missed the horse race portion of the festival, but were able to see the awards. Medals, certificates, and milk poured onto the horses. Towns and Provincial Centers like this one, Tsetserleg, all seemed to feature colorful roofs, high stockade-like fences, and few cars. 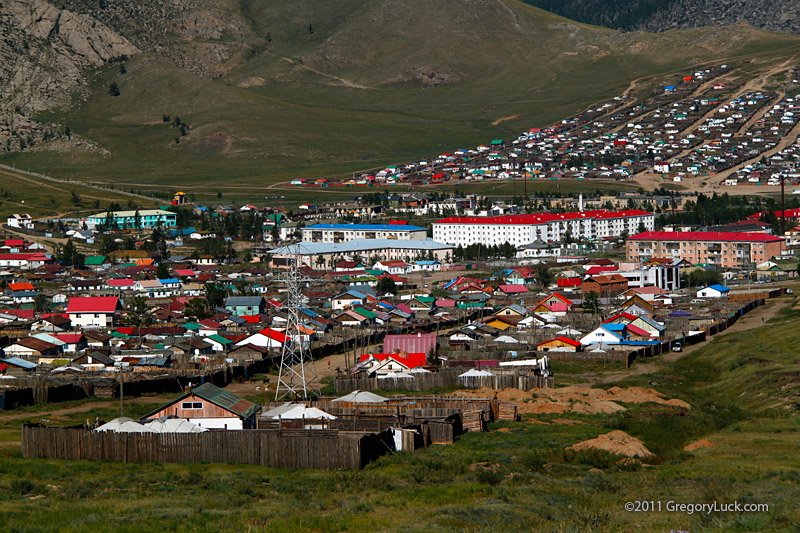 Laundry day at the ger. 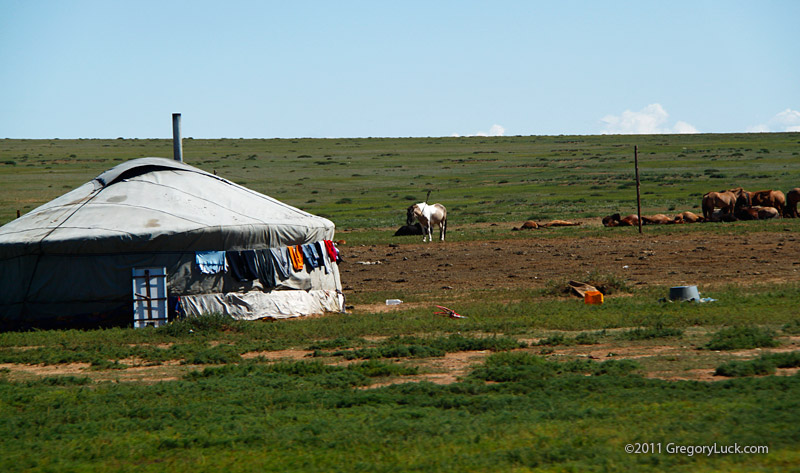 First day of school in Ulaanbaatar. Opportunities are changing for the youth. 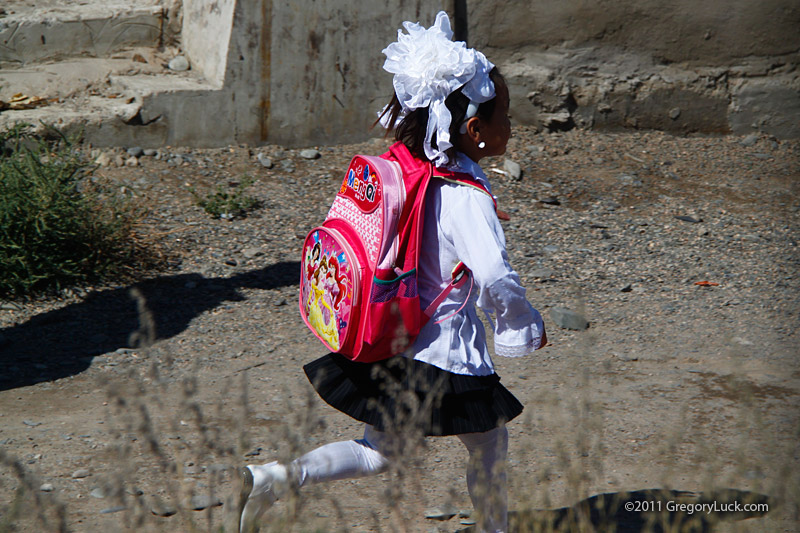 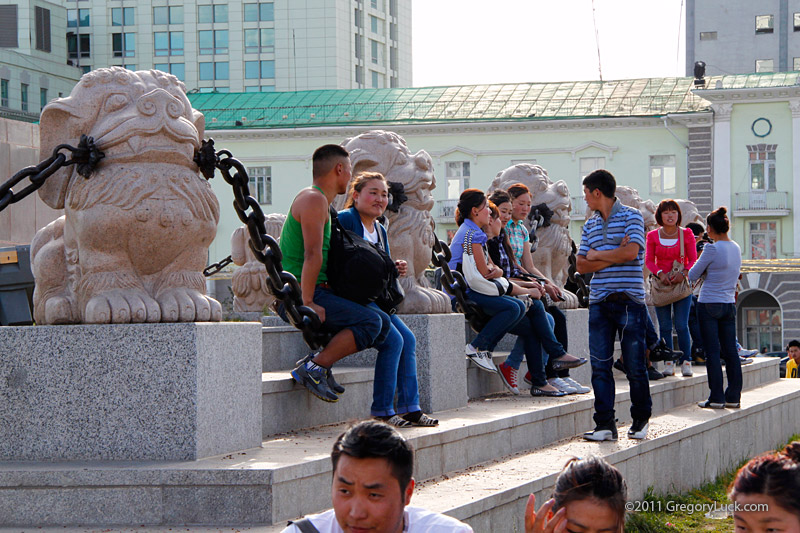 Tourism is growing under the long shadow of Chinggis Khan. Many of the New Urban Mongols seem to be doing well, but many more are struggling. These ladies sell wares along a busy sidewalk. 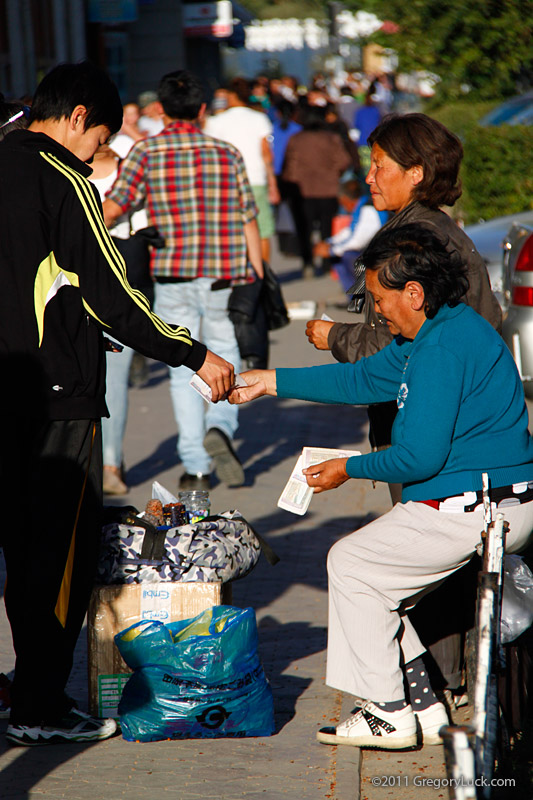 I was told that most Mongolians still have ties to the countryside and long-held traditions through relatives. It seems that these ties can only grow thinner as Mongolia moves into the future. 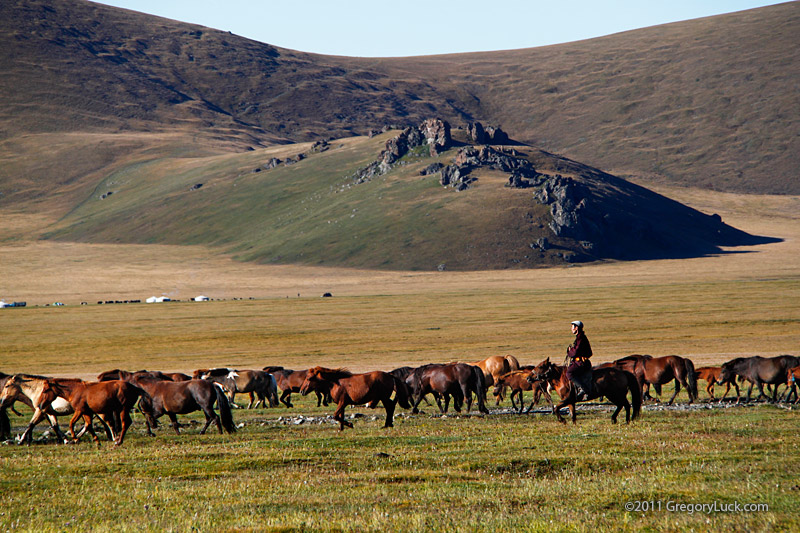 These young horsemen are inheriting a long legacy of pastoral nomadism. At at time when it may be disappearing. 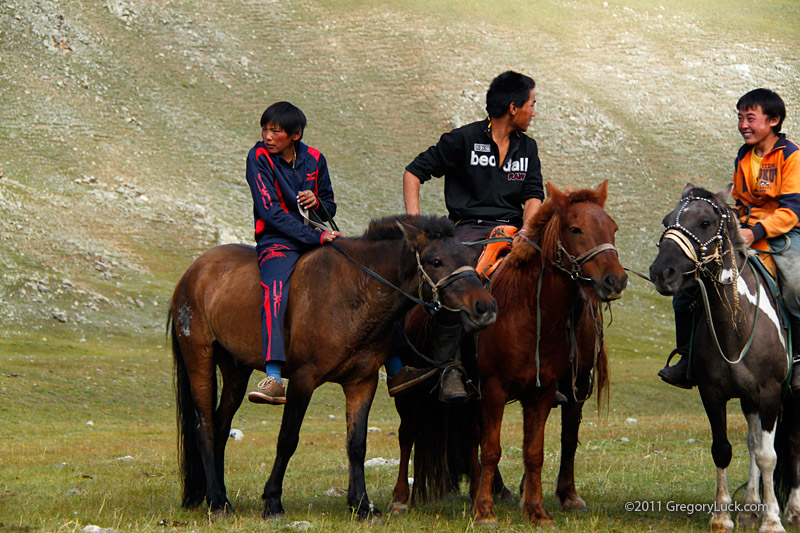