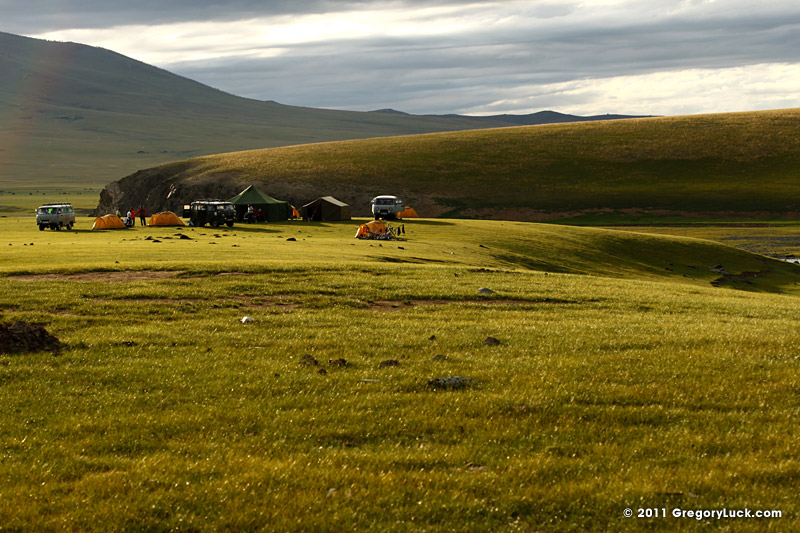 My travels in Mongolia were not exactly an eco-tour; seven bicycle tourists with seven staff members and three Russian-made four-wheel drive vans. This mode of travel differed from the bicycle touring I've done in the past. But did have plenty in common with road trips that Trina and I take in her truck with our bikes along. Riding, camping, and all the luxuries of, well, camping, carried along in the motor vehicles. With added layers of luxury, like a staff cook and cook's assistant, plus a guide to lead the ride, three drivers for the vans and van repair. And, perhaps most importantly in this case, an English speaking translator and cultural guide.

I've never traveled with a translator and cultural guide before. I have to say I liked it. My usual kind of trip is envisioned as more of a Man-In-Nature sort of adventure. But there have been times in the past when my foolish choices have resulted in a Man-vs-Unknown-Language-and-Culture adventure that overwhelmed the potential Man-In-Nature enjoyment. It really was a good thing to have someone to translate the language, explain cultural perceptions, expound upon geography and history, and to generally shed light on the overall experience.

Once out in the sweeping countryside, I found that the landscape did a pretty good job of shedding light on itself. I hope these photos help illustrate that point.

The capital city of Ulaanbaatar was both surprisingly cosmopolitan and fashionable as well as frantic, convoluted, and seemingly under construction and demolition at the same time. 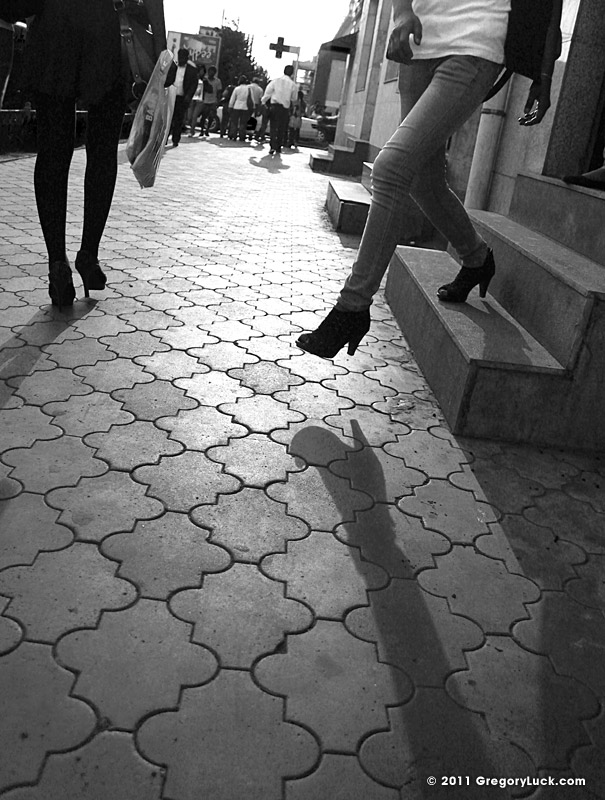 I'm never particularly comfortable in cities, so it was good to put some distance and perspective (and some trees) between me and the urban squalor. 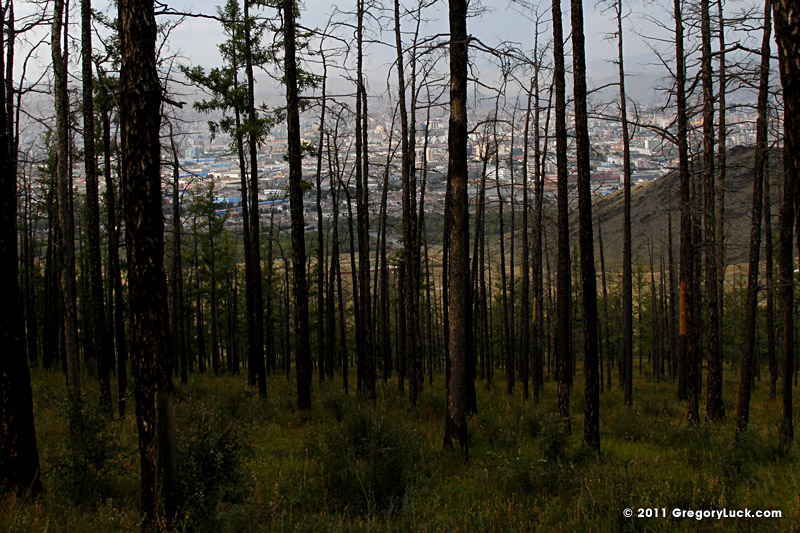 Riders on the silvery rain-soaked route. 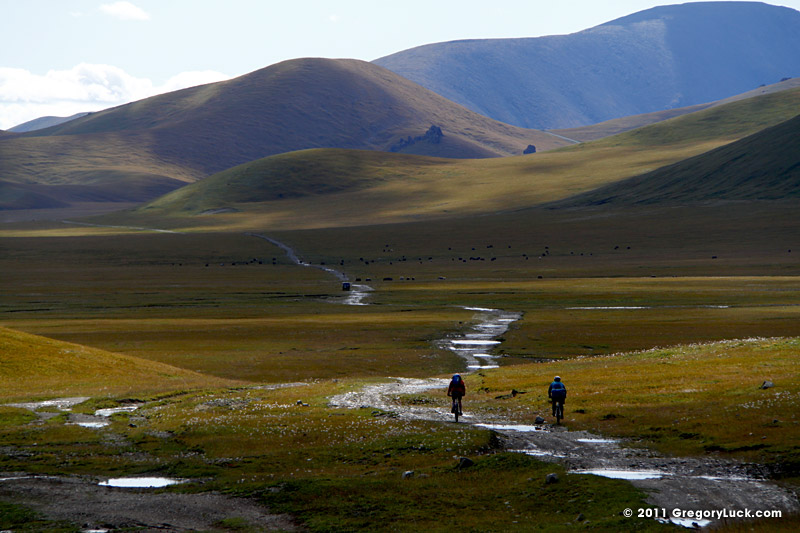 We saw only a small portion of the whole country on our journey so it is inappropriate to generalize. But the rumored treeless expanses weren't quite as treeless as I'd imagined. Pines covered the moist north slopes of many of the mountains, and rivers were often lined with broadleaf trees. 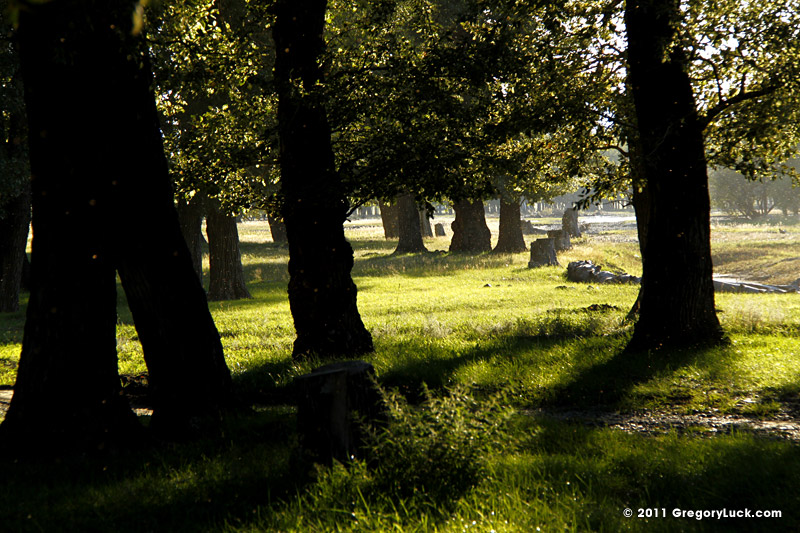 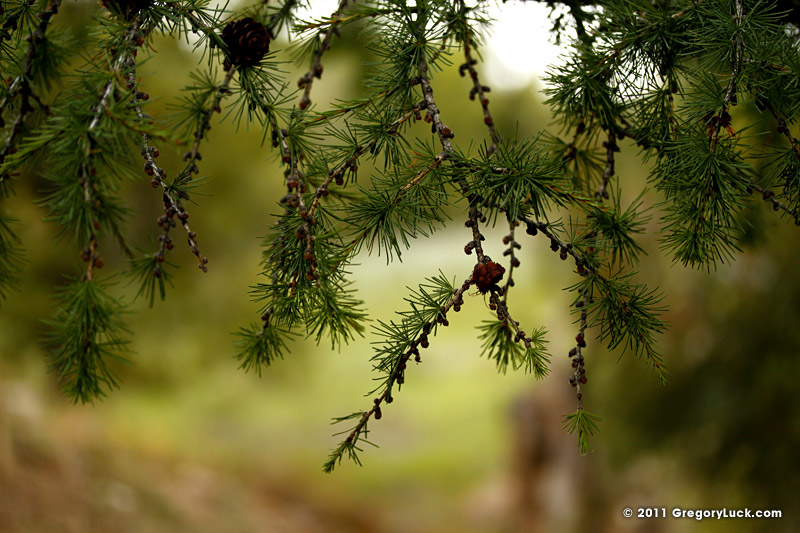 Both cloud shadows and herds of sheep, goats, yaks and horses poured over the mountainsides. Though Mongolia is the least densely populated country in the world and though the views seem limitless, we were rarely out of sight of a ger (tent) or a herdsman. 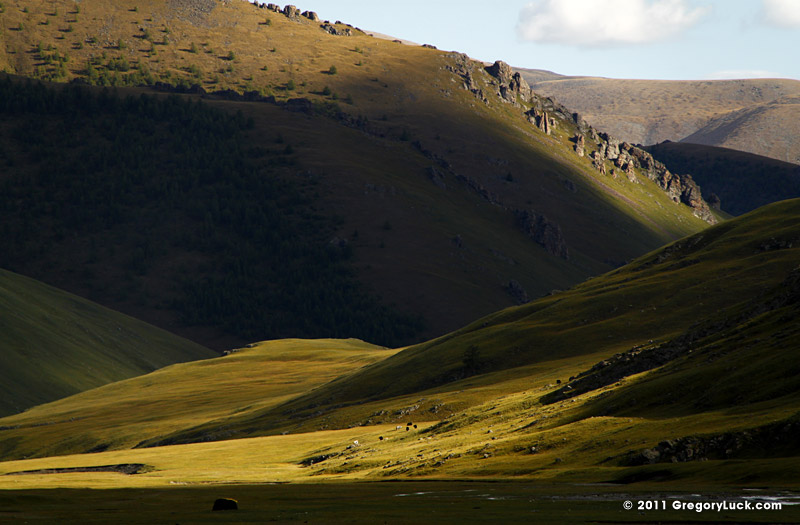 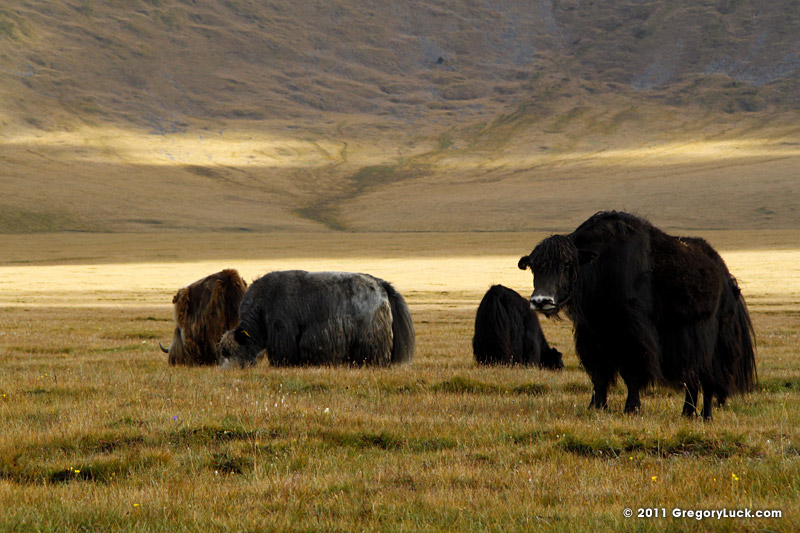 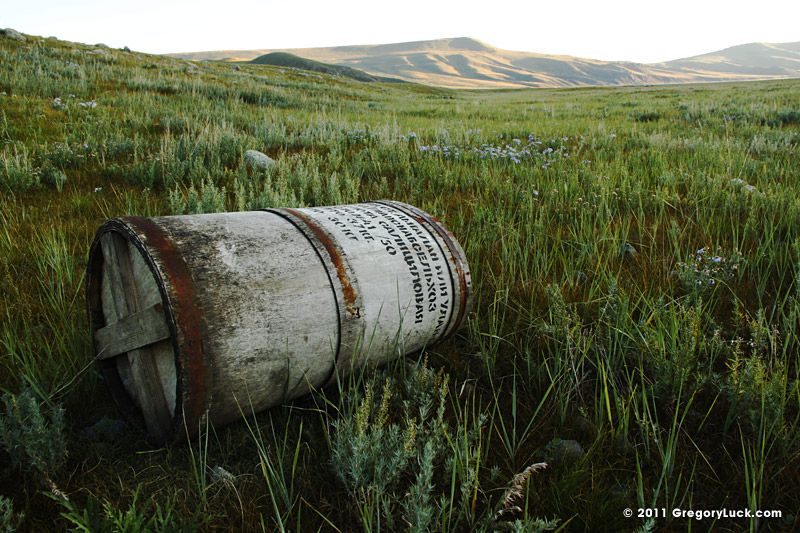 The weather was generally cool and we were teased by storms, but we only rode during a lengthy downpour on one day. 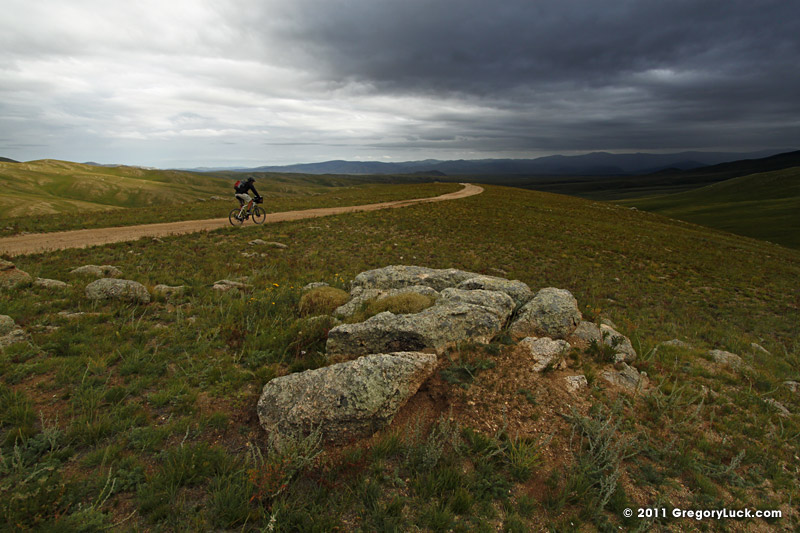 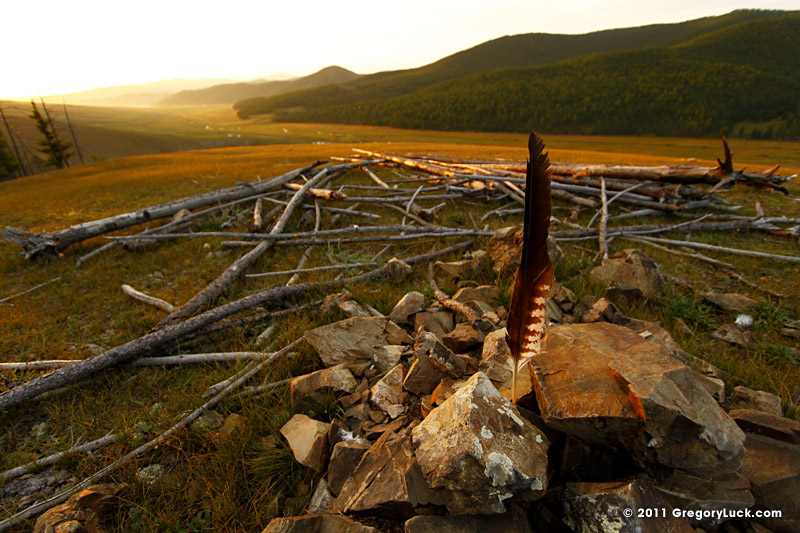 Scattered along our route were lasting signs of an ancient and little understood bronze age horse culture. Grant explores these stone circles and mounds. 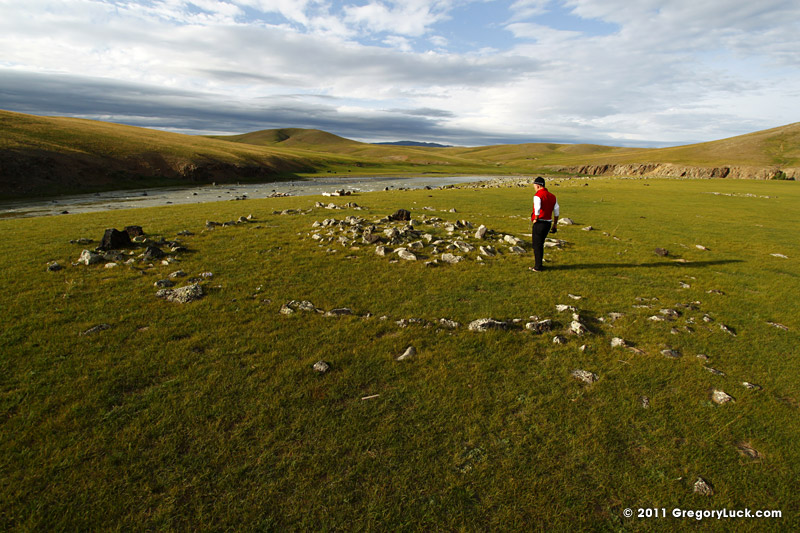 Herdsman and dogs in the growing shadows of evening. 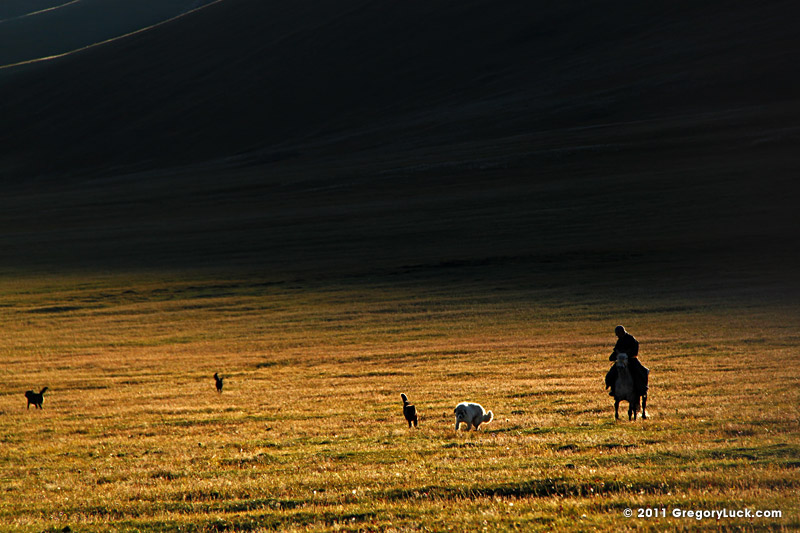 Posted by Bikeabout at 8:24 PM