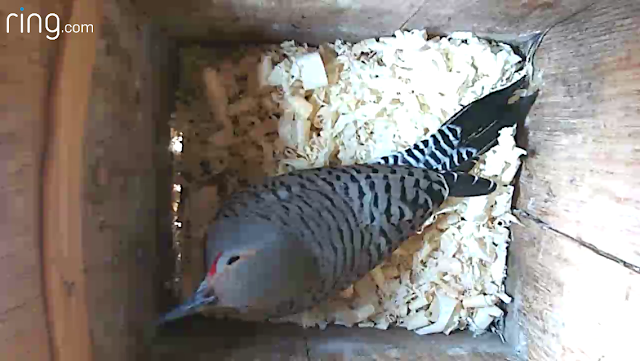 This is not a Western Screech Owl.

As we count down anxiously to DerOwl Hannah's scheduled (ha!) 2019 ETA, which should be around March 18 or 19, it actually looks like we may not have owls this year. We know they're both still in their non-nesting boxes, Boyle one block south and DH one block west - we saw both of them a few nights ago - but they haven't been checking in at the box regularly like they did last year.

The last time they had a nest box-proximate conversation was January 4. One of them sat in the box calling for 2 1/2 minutes, then left and alit in the nearby trees where both of them hooted back and forth for a few more minutes:


One owl briefly checked in on January 15, and then in early February a flicker moved in. It occupied the box for most of the month, removing pine shavings every day and sleeping in it every night. 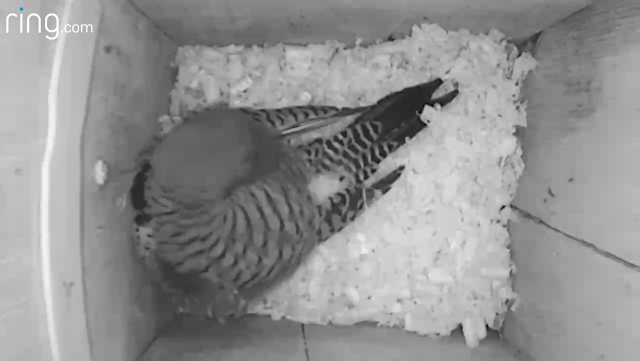 There were no owl check-ins caught on video during those weeks. It's possible they did check in, but the camera missed it, or they may have observed that the flicker was there and stayed away.  The flicker left on Feb 24, and then one of the owls entered the box for the first time in 8-ish weeks on Feb 27. Eight weeks! That's not normal. By then, most of the 1800 thread count pine shavings had been removed, which the owl certainly seemed to notice:

And they haven't been back since.

Last March, they were checking in at the box every night up until the night DH moved in and laid her first egg.


The official word from the Audubon folks is that if a pair has a successful brood in a nest box, they are very likely to reuse it the following year. They've now had success in this box for two years running. Have they not checked in because using this box for nesting is a foregone conclusion and they therefore don't need to have any discussions about it? Did the flicker scare them away? Is a flicker big/aggressive enough to displace a WSO? There is video evidence, from someone else's nest box cam, suggesting that a WSO can readily fend off a flicker/woodpecker:

Back to our box: the flicker left, yes, but was it too late? Were the owls already put off? Did they decide on another box while the flicker was in this one? I do plan to replace the pine shavings, but since the flicker left, a starling has been in the box, and it too is hell-bent on getting every last lovely pine shaving out-out-out, so I'm waiting until closer to DH's scheduled arrival date to replace them, which will give the starling less time to spit them all out yet again.

I've mentioned before that there have been infrequent sightings of a Great Horned Owl in the neighborhood. It has become frequent. The GHO has been making a very regular appearance, even sitting in the trees right above the nest box here and right above the box that DH sleeps in one block away. That, too, could be a deterrent. There are so many questions at this point, and all we can do is wait and hope.
Posted by Sweet Solitude at 7:07 PM 40 comments: 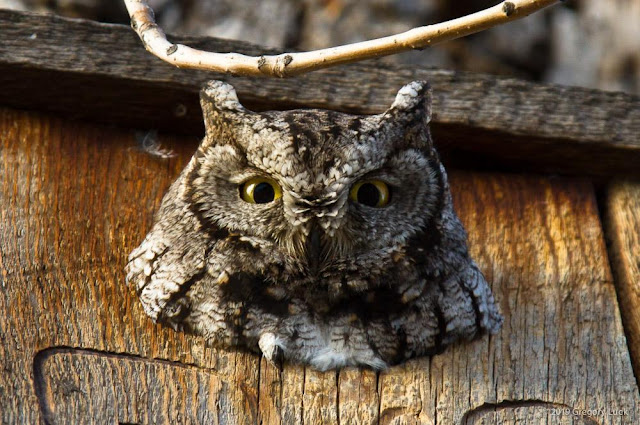 Our evening routine changes once the owlets aren't in a contained space. To find them each evening we have to go prowling, tip-toe-ing around the neighborhood at dusk, listening (through all the shockingly loud urban sounds we normally don't notice quite so much) for the hoots of the parents and the raspy chirps of the owlets. Initially, the family stays within a block of the nest box for hunting lessons. Utility lines are especially useful perches as they run the lengths of the alleys, providing a view down into the back yards where the good bug stashes are. Many evenings that is where we find all seven owls lined up, diving one at a time into a yard and swooping back up to the line with a morsel. At this point, the parents are both feeding the owlets and teaching them to hunt for themselves. They gradually venture further and further from home base and it becomes harder to find and follow them.

During these three weeks, our most important nightly quest is to find them in order to see if all of them are still alive. Every night poses countless threats, especially since they do most of their hunting on the ground, nabbing bugs from lawns and gardens, where their chances of being killed by a domestic cat are enormous. Amazingly, last year's entire brood survived until their departure date, which is when the parents determine that the owlets are ready to be on their own and take them away to go find their own territory. This year, by the end of that crucial three weeks, one owlet had been killed, and the parents took only four owlets away to start their own lives. Only one owlet lost, though, can be counted as a success!

About ten days after the whole family suddenly departs,* we'll notice that one of the adults has returned alone, and then ten days or so after that, we'll hear the two of them reuniting, doing the fast-paced mating call once they've located each other. They also make one final return visit to the nest box and have a conversation in it before vacating the nest box for the season and moving into their summer-fall-winter homes, Boyle in a box one block south of here and DerOwl Hannah in a box one block west of here. They don't sleep in the same box, but they do find each other every evening and head out together to hunt.

Thus endeth the 2018 owl saga, and we can now fill in some of the blanks in their schedule:

*In 2017, the whole family departed on the same night. This year, one parent departed with 3 owlets on June 16 and one parent stayed behind an extra day with a straggler who must not have been ready to leave yet.

I've worried about #5 from the beginning because the common understanding of nest politics is that the smallest, weakest, youngest of chicks will not get as much food as the others, will get picked on by the others, possibly even killed by the others, and one way or another, is likely to die long before the possibility of fledging. With our owls, however, we never saw a single indication of aggression toward #5 from any of his siblings, and the parents seemed to make a concerted effort to locate him during the feeding hullabaloo to make sure he got his share of moth, cockroach, and sparrow.

So, even though we thought he wasn't set up for success, on the evening after all his siblings launched, younger, smaller, weaker #5 followed, leaping from the box at dusk, flying like a pro, into the nearby trees to join his family.

Here, he sits in the hole for many minutes, which I've edited out, chirping faintly while his parents call to him from the trees, and finally fledges with a simple, uneventful fwoop. And that is that.

Four of the Owlets Fledge at 31 Days

There is very little usable video at this point because the owlets have bumped the camera even more, and there are a couple of videos where it looks like the rowdy little things have actually been hanging from the camera, which means that on the momentous, much awaited night of fledging, there is pretty much nothing to show. The videos at this point are more useful for sound than anything. Sound alone, however, does tell the story: The oldest four owlets took their leaps out into the world at dusk on May 25, at 31 days of age.

Compared to the chaos and clamor of last year's fledge, this year's was positively anticlimactic. Each of the owlets' first flight was as if well practiced. No flailing, no falling, no scrabbling and scraping and languishing on the ground for minutes at a time while neighborhood cats lurk in the shadows. There was some drama, though, in that little #5, two days younger than his/her siblings, stayed behind, alone in the box, not yet ready to take the big leap into adult life. Try - JUST TRY! - not to anthropomorphize* as you listen to these lonely* little chirps:


Once the owlets are out of the nest box, they and the parents remain in the immediate neighborhood for a few more weeks, during which time the parents feed them in the trees, teach them to hunt, and try to protect them from predators. Despite having four of her babies to keep track of out in the trees (with Boyle's help, of course), DerOwl Hannah came back into the box to feed #5 through that last night: