Ice Time of Year for a Ride 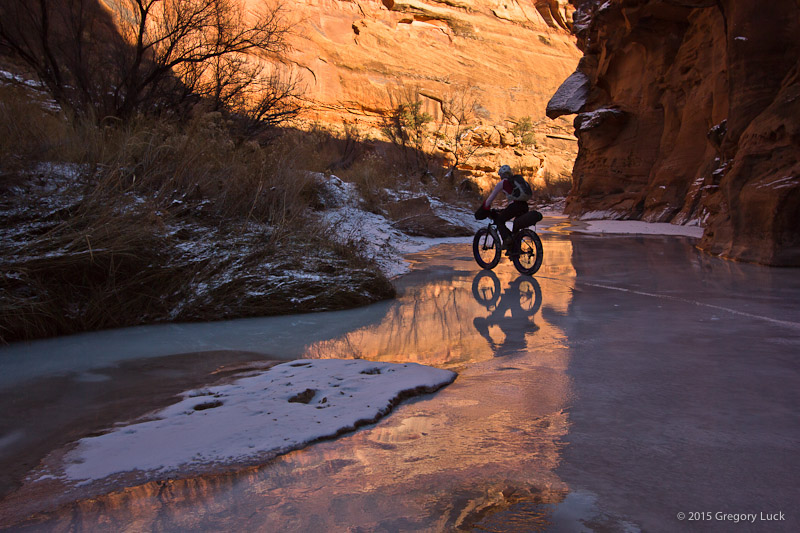 We got our first real snow of the season this week. Which reminded me of a trip I took last winter, or some such thing I should be saying to justify not having posted this for almost a year.

It was early January. The frozen heart of winter. And there was a plan. Fat bikes. Studded tires. Overnight gear. And miles and miles of remote canyon where the river was frozen into an icy highway of sorts.

Some preparation was needed. I borrowed a fat bike. I scrambled around town trying to find enough screws. Then I drilled and screwed until I'd filled every-other knob on a couple tires with ice-biting metal. 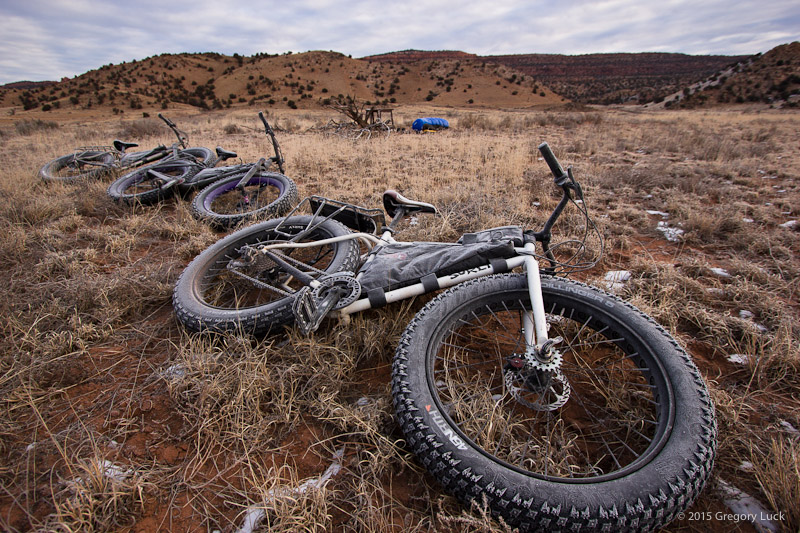 Then the minor detail of packing. I'll admit that I have almost no experience camping out in single-digit-F temperatures. And that I have what I consider to be a strong interest in not freezing to death or in losing any digits or limbs to frostbite. And though I don't have personal experience, I have read enough tales of arctic and high-mountain exploration to know that pretty much any time someone steps outside a shelter into extreme winter conditions, they'll end up stumbling back in all dead or limbless.

In the week leading up to the trip, inspired by my trepidation, I spent a couple nights sleeping on the concrete driveway outside my apartment door. The first night, I was chilly by 2 a.m. and stumbled back into the heat of home to finish the night. The next night, bags, pad, clothes reconfigured, I slept comfortably in mid-teen temps and was still dozing happily as the first dog walkers of the day passed by.

It began to seem possible that I could survive a night of cold camping along an ice river. If I could get into my bag before I froze. I now began to worry about the transition between riding in the cold -- which I have some experience with -- and sleeping in the cold. January days are short. How long would we be riding into the evening? Into the night? How cold and dark would it be before we stopped riding? And would I be able to set camp, find or melt water, make food, eat, and still be alive to crawl into my sleeping bags?

The travel mode for these adventures is that each person must be strongly independent and self-prepared. I.E. one must have one's own shit together. Companion #1, Doom, is known to pedal, paddle or climb his way off into all sorts of rugged conditions. Companion #2, Mike, made a career of exploring the limits of human possibility, often in the Arctic. So I believe I was in my rights to feel somewhat intimidated by not knowing what I was doing and to fear that I might become That Guy, the awkward travel companion who slows everyone down, endangers the group, and -- most embarrassingly -- has the potential of becoming a heavy, frozen human body that everyone else has to drag out of the wilderness to present to the authorities as an example of all the mistakes one shouldn't make.

Luckily, my own fears were somewhat mollified by the presence of companion #3, Little Jeny Sunshine, Mike's dear consort, who, though certainly an adventurous sort, seemed to have as little experience as I with this sort of icy adventure. I was comforted by that lack of experience and by the fact that I outweighed her by a considerable amount. Enough that it was easy for me to imagine that she, not I, would be the first to freeze into a solid block of ice.

The preparations were made. The day came. Mike, Jeny and I headed out to meet Doom at the start. And… We got shut down.

The river was not frozen. Or, it was frozen a little bit, covered in shadowy places by rotten ice. But there was also lots of open water visible from the bridge where we stood, looking. Hoping.

What's a well-equipped group of winter ice bike riders to do in a situation like this? Make the best of it, that's what. The short day was already ending. We found a spot to camp. Gathered wood. Built a fire. Then gathered around the warmth, eating, drinking, and telling stories. Rotisserie humans, turning, turning, bright side burning, icy cold side filled with yearning. The night grew deeper and stars and moon wheeled overhead. At last, it was time to see if I could survive tucked away in my sleeping gear under the cold sky. Which, somewhat to my amazement, I did. 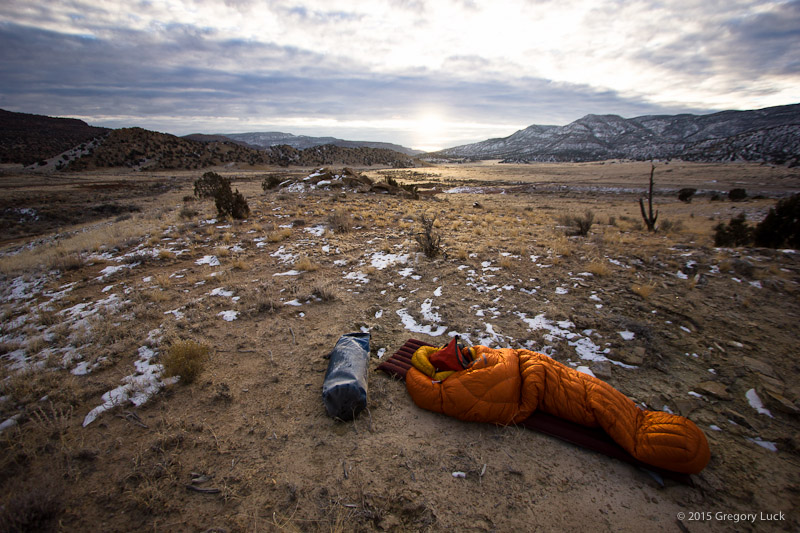 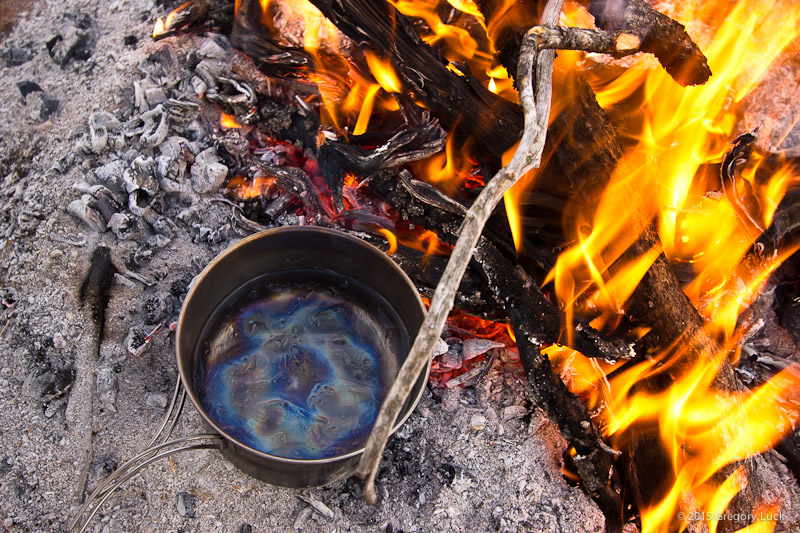 In the morning, the fire roared back to life and so did we. Soon we were riding over dirt and snow in the chilly sunshine on a mix of dirt road, jeep road and bovine singletrack, heading for the entrance into a side canyon. Doom stopped to test his studded tires and ride his name into a frozen stock pond. But the rest of us didn't hit ice until we dropped into the canyon. 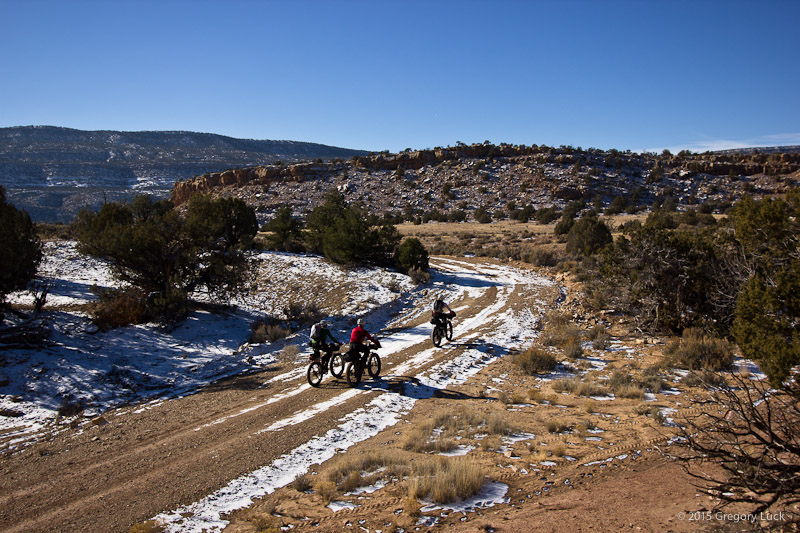 In the canyon, the riding immediately got more interesting. There was water in the bottom. Sometimes flowing, sometimes frozen. We picked careful lines over hard ice, rotten ice and thin ice. Splashed through shallow water. Rolled between boulders and over slickrock and on frozen sand and over loose rubble and through slush. The studded tires were pretty amazing on the various versions of ice, but we still needed to keep our bikes mostly upright. And I was totally impressed with how the fat tires tractor-ed over the rubble and thrash in the bare parts of the wash. 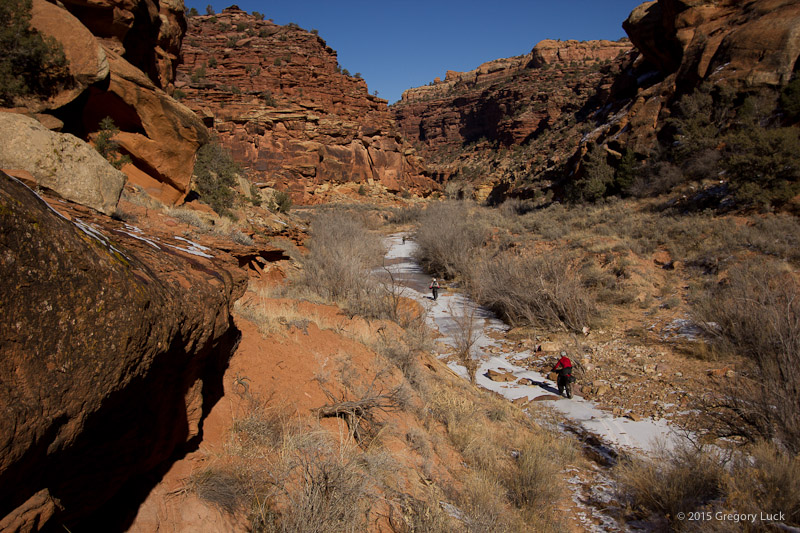 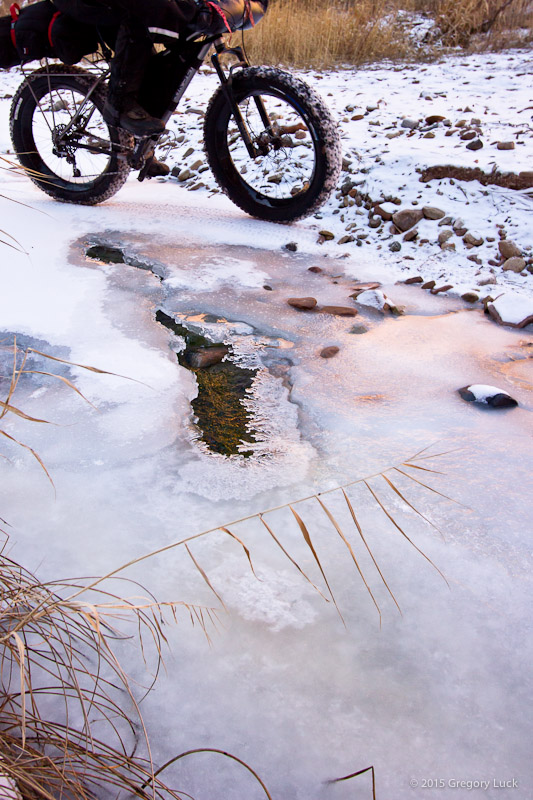 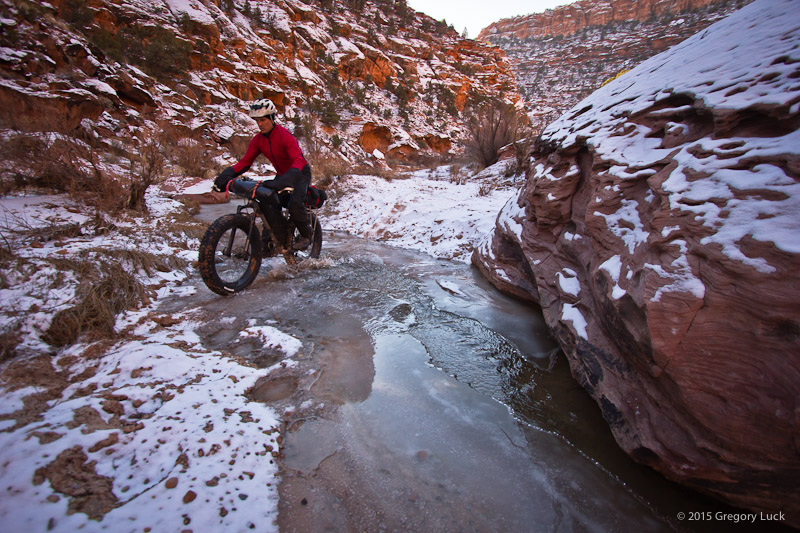 All this was very engaging and very fun. We tracked each other's lines or invented new ones. We mixed ice and rock searching for the most interesting and rideable route. How deep is the pool beneath that ice? And how thin is the ice? And how thin can the ice be before a fat tire breaks through? How grippy, exactly, are these tire studs? We were learning and grinning and having a great time. Snapping photos of each other. Sharing our enthusiasm for life and for being outside. And no one got more than a quick boot-dunking for all the experimentation.

Plus, all this fun was happening deep within the rock canyon. Colorful layers of stone surrounded us and towered above. We moved from shadow to sunshine to shadow as the corridor twisted through the rock. There was an active quiet to the cold air, the low sound of water rolling over stones or beneath ice, the calls of ravens near the rim, and the crunch and grab of our tires. I was distracted enough by the fun and scenery that I pretty much forgot to remember that I was narrowly surviving the perils of an icy winter adventure. 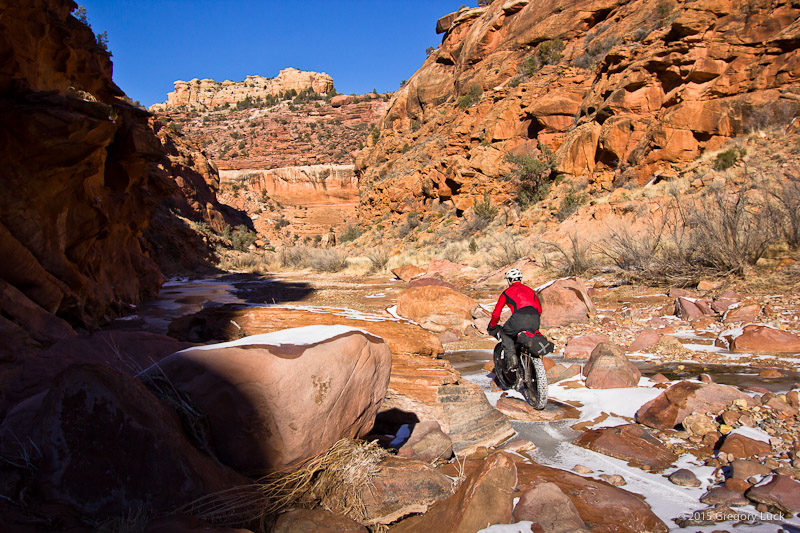 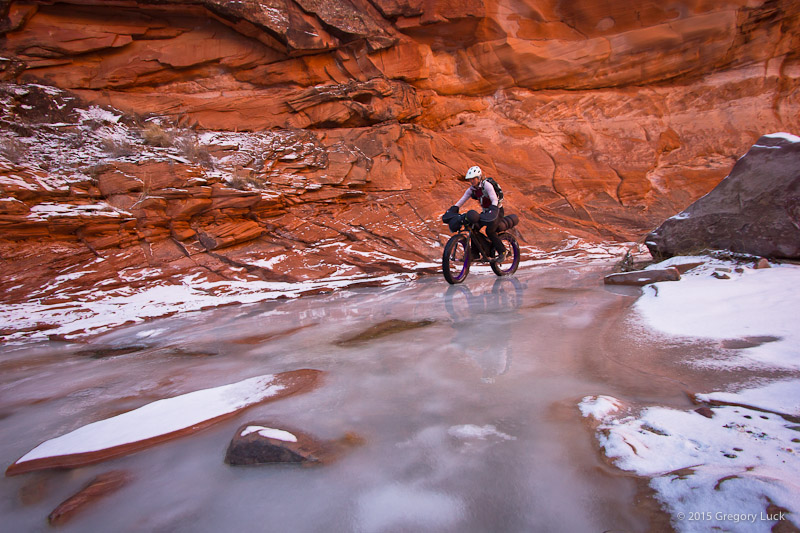 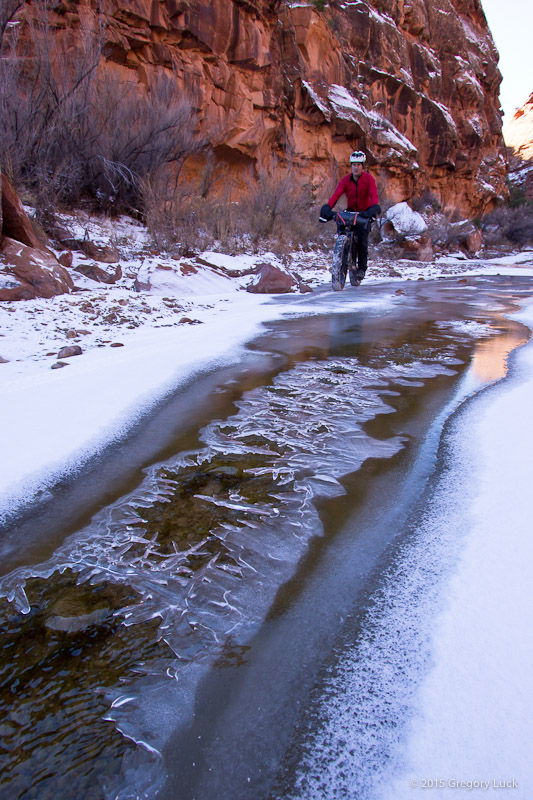 The canyon widened when we reached the river, the original river of our intent. But here, too, it was not sufficiently frozen. We had hoped that further down the canyon the ice would be more sound. That perhaps we could ride onward through the main canyon from here. But no. We sat on the frozen sand in the warm sunshine and ate a late lunch. We stomped around the edges of the flowing water in our boots, probing thin ice and riverbank to see what there was to see. Then we mounted up and headed back the way we had come. As shadows lengthened and deepened. Up the narrow side canyon toward the end of the day. Back over rock and snow. With the inverted echoes of the canyon cliffs reflected and glowing in the ice and water beneath our wheels. 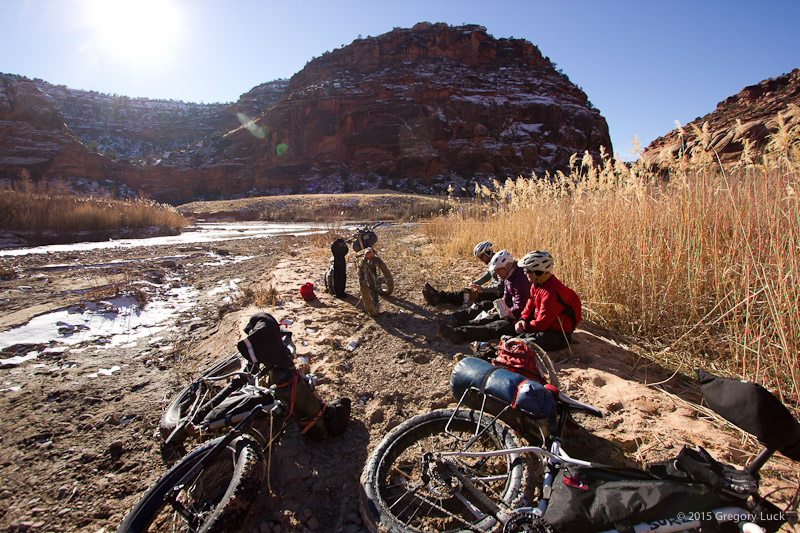 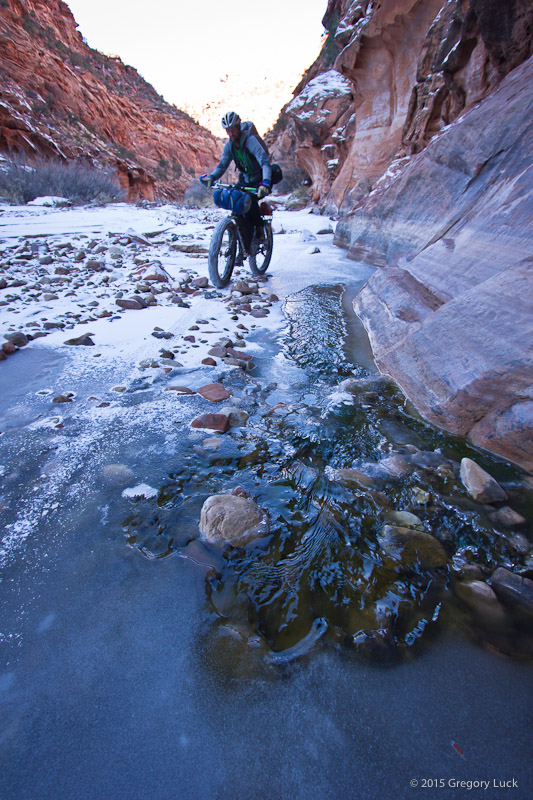 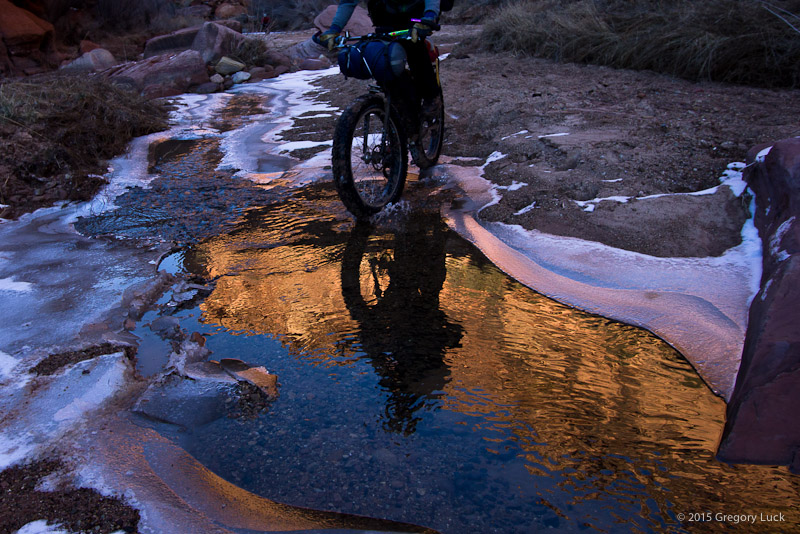 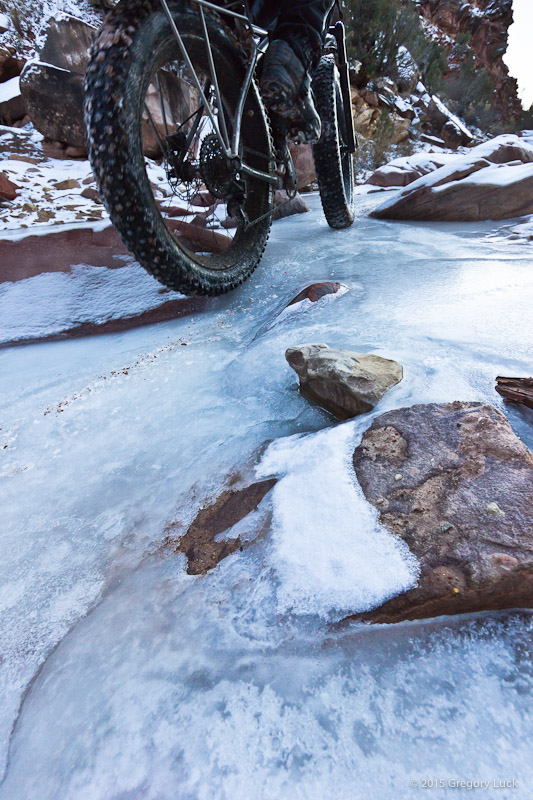 The short day ended quickly once we were back out of the canyon. We found a camp spot and gathered wood for another long night. Pleasant company makes short work of long nights, I'll suggest. I'll also suggest I'm often awkward around people in general. But this small crowd seemed to work. Mike's long history of bike travel. Doom's exploits all over the West. Jeny's enthusiasm for all things outdoor and bike and, well, everything in life… Tales of the day and tales from times past, intelligent curiosity, bold inquiry and thoughtful speculation. Shared in a spirit of entertainment, inclusion, and maybe even education. This warmed the night as much as the fire. And like the fire, once I stepped away into the cold blue night, that warmth was missed. When I snuggled into my sleeping bag, the embers of the fire were too far away to warm me. But my memory of the people around that fire remains warm, even now, months later as I write this. 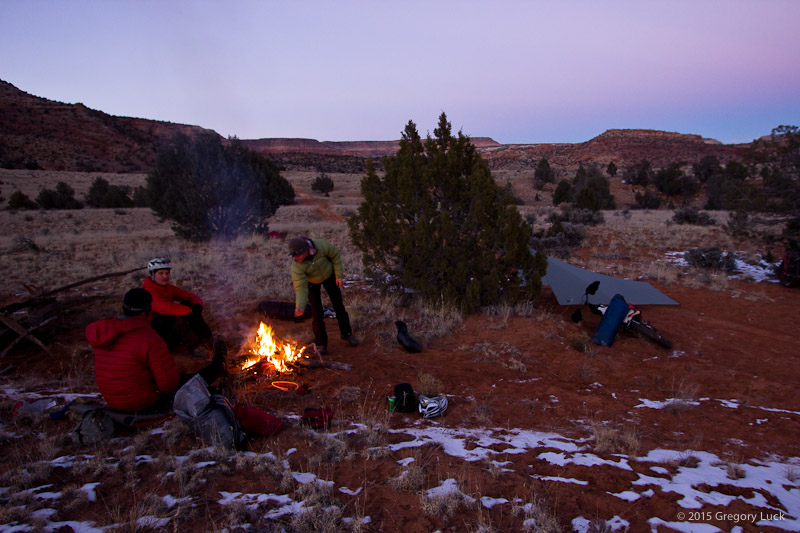 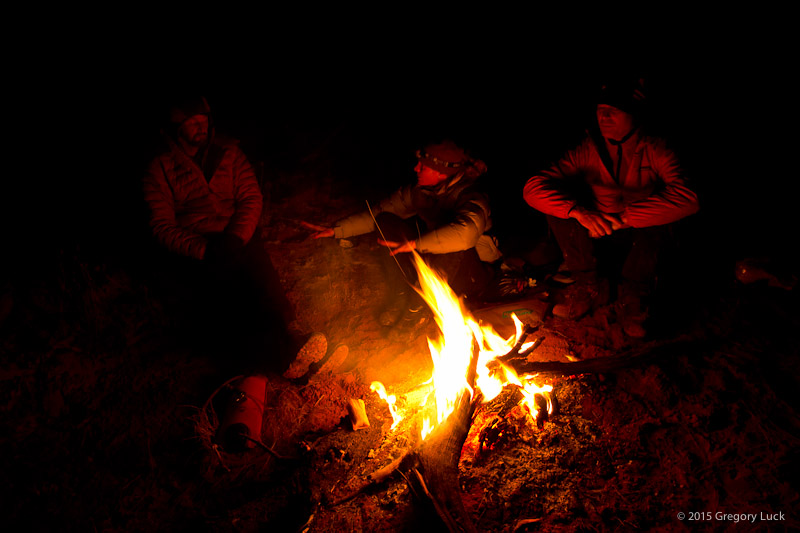 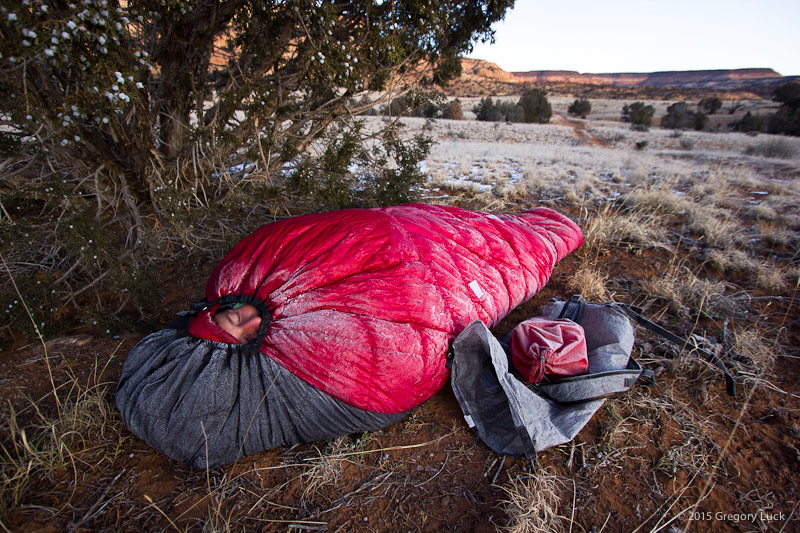 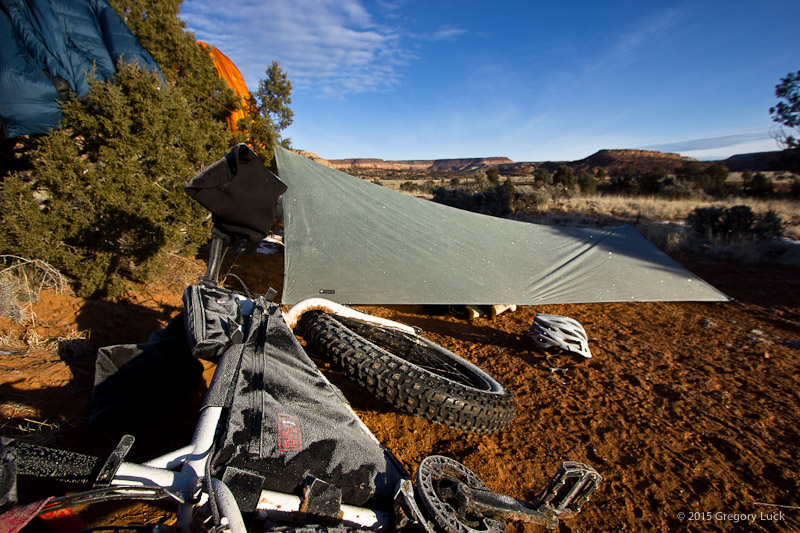 Sunshine poured over the edge of the world and onto camp. I was once again pleased to find that I was alive, unfrozen, and had even retained all of my limbs. We fired up the fire and fired up ourselves and before long we were buzzing and bounding along on our plump tires, heading out more-or-less the way we had come. Cow trails, jeep track and dirt road. Back to our cars where we would separate. Back to our own towns where we would each go our own way, following our own paths into the future, toward our own versions of adventure. 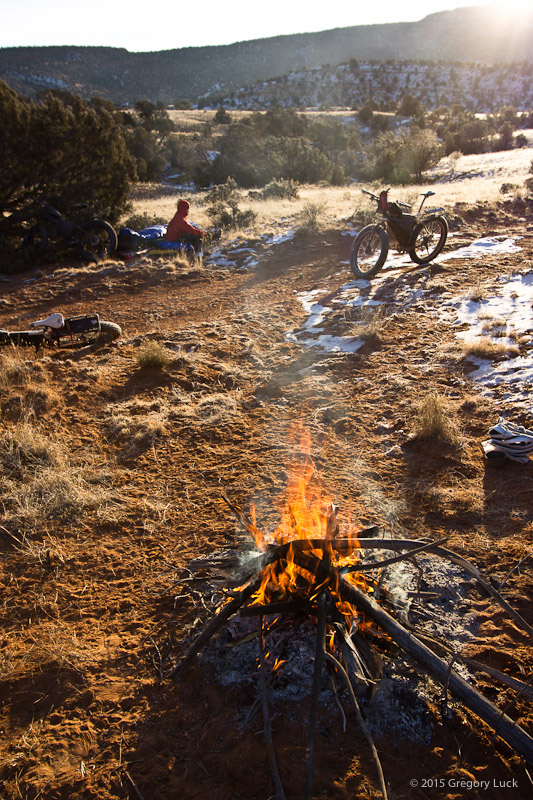 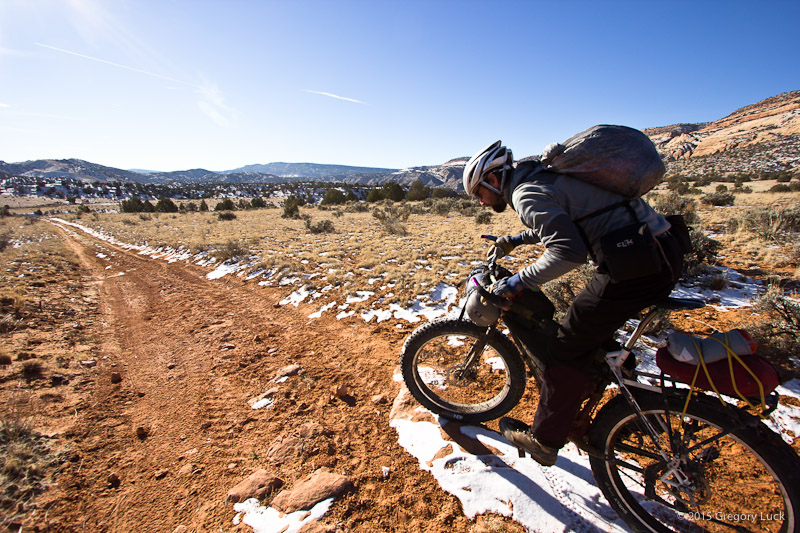 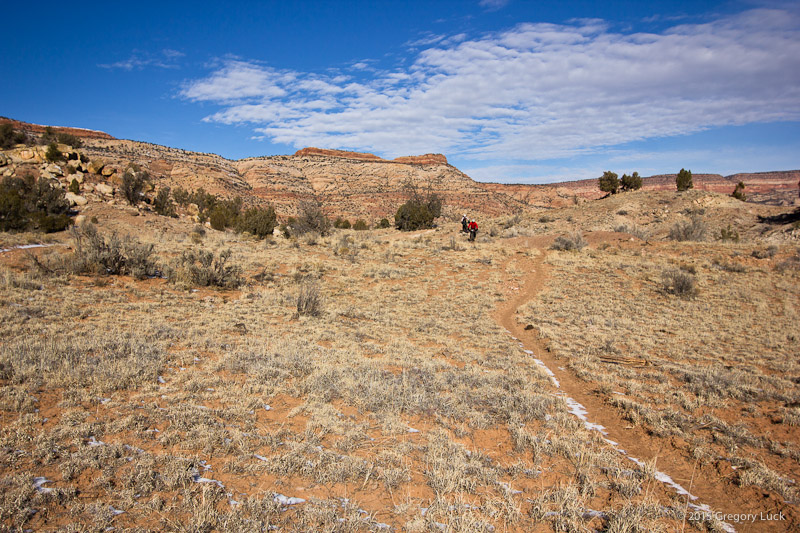 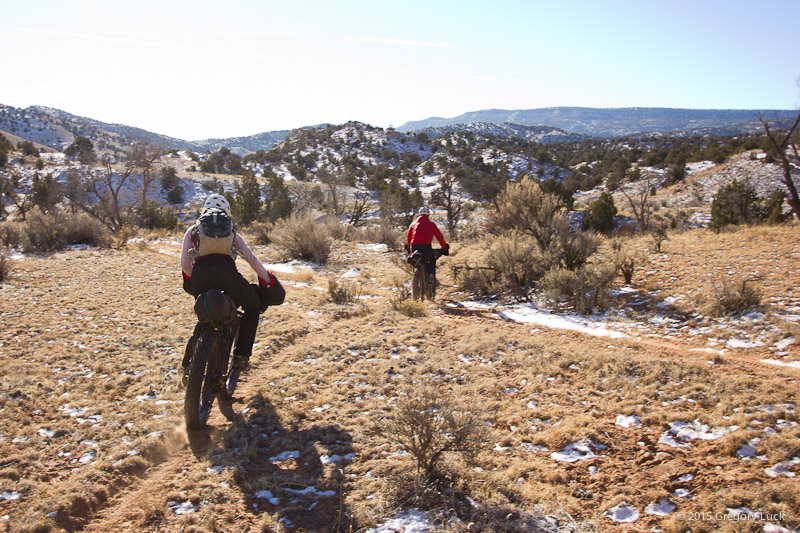 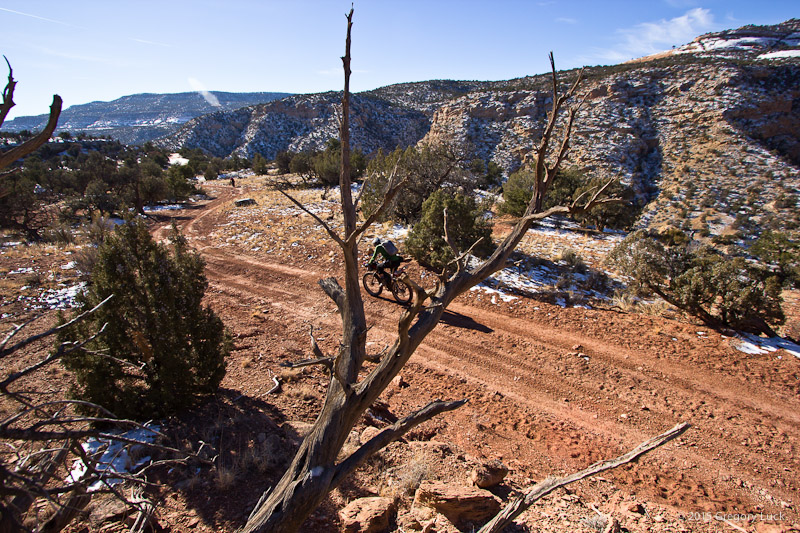 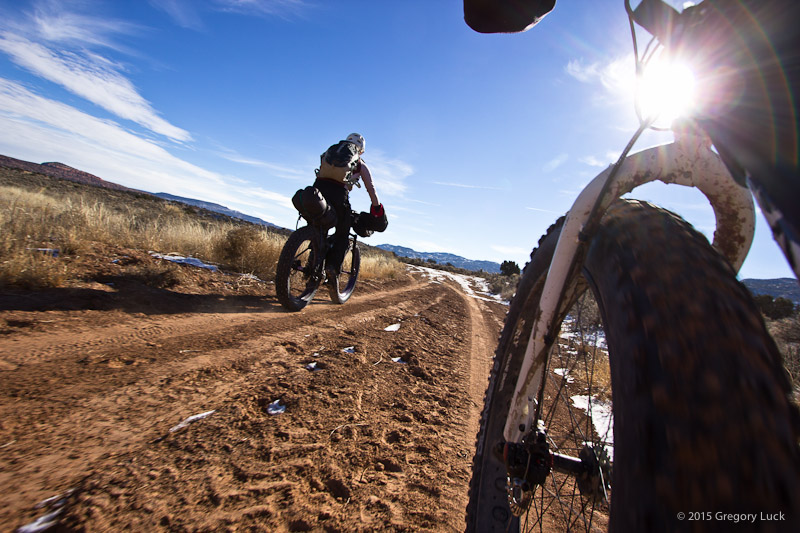 For me, it's possible that this whole winter camping thing might open up a new range of adventures. That I'll spend more time outside and less time inside looking out the window. Sure, I'll still take my survival and my limbs seriously. But now, as winter begins to get under way for real, I'm starting to scheme. The fat bike I borrowed is now mine. And I've already re-studded my tires for next year's frozen river ride. 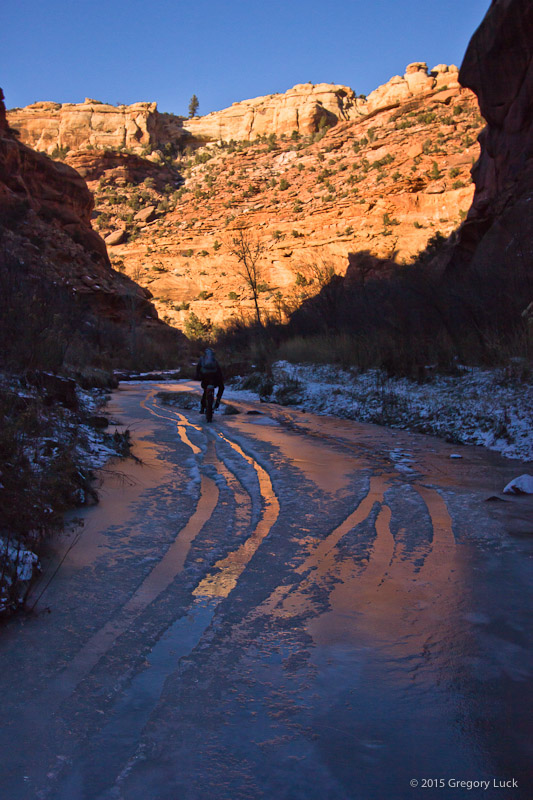