The first break speaks to the heart of the gardener. There's always an element of chance in growing one's own food. With weather, disease, grazers, and in this case, insects, there are plenty of opportunities for disaster, or at least heartbreak.

Trina had read about "the world's most delicious squash" this winter, and had done some sleuthing and managed to find seeds for the heirloom Italian Marina di Chiogga squash -- which we hoped was the one. We planted this spring and watched it grow wildly (amid our several other varieties) and then watched the warty fruits expanding into grotesque vessels of -- we hoped -- ambrosia squashiness. 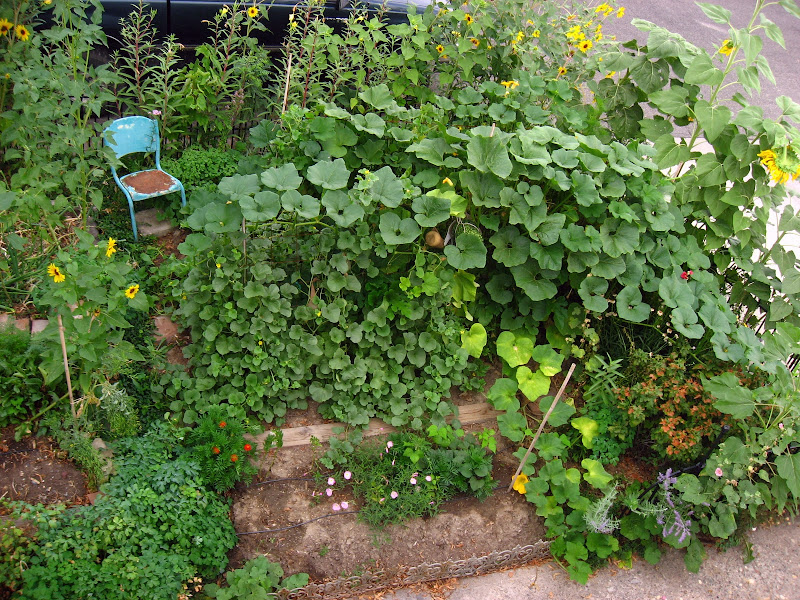 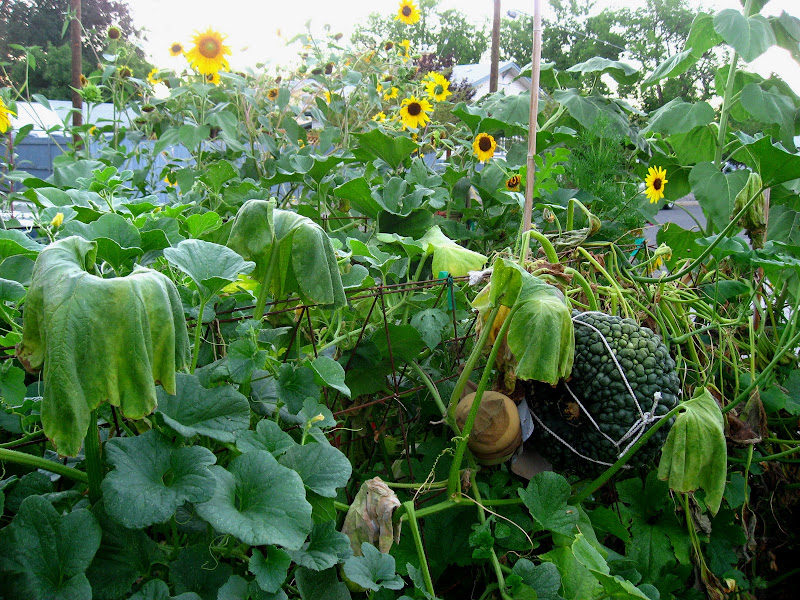 Then, heartbreak. In the space of a day-and-a-half, the leaves wilted and stems and leaves started turning yellow. Trina found the culprits: squash bugs! She did some quick research and found the best organic solution was to spray with pyrethrins. Organic, yes, but it kills bugs. She sprayed. Bugs died. The vines have recovered a bit and we hope that there will be enough gusto to finish ripening the squash so that we can have winter food. And the world's tastiest squash. 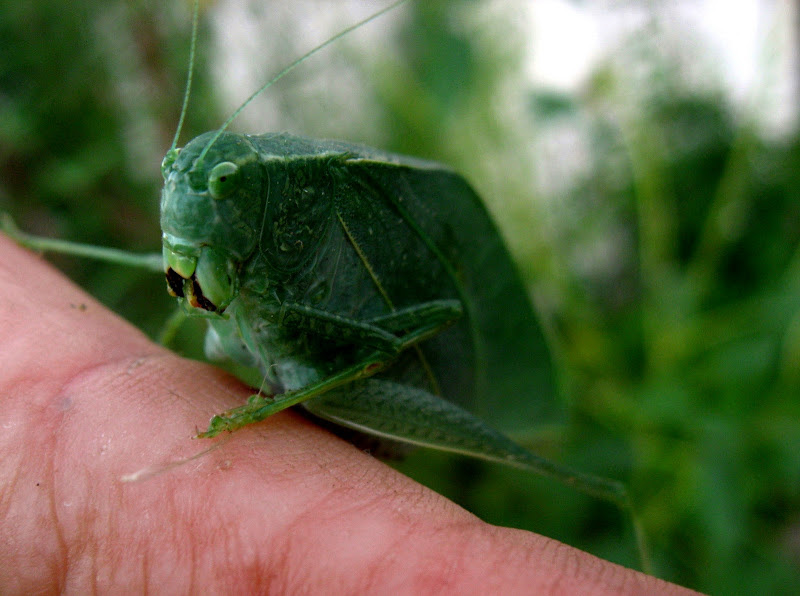 In other news of Breaks, there was an incident involving me flying over the handle bars of my mountain bike. Everything was going surprisingly well during the flying part, especially the surprise. There was, however, some difficulty during the landing phase. The primary landing gear (wheels) being at that time higher in elevation than the fuselage, and the secondary landing gear (feet) not yet disengaged from the pedals, there was a rapid deployment of the emergency landing gear.

The emergency landing could be considered a success. All passengers survived and the main body suffered only minor scuffs and dings. There was one complication. One strut of the emergency landing gear snapped on impact, which is why I had to drag my bike to the nearest road and ride myself to the urgent care center. And why I'm now sporting a blue cast that will allow my busted right wrist to heal. 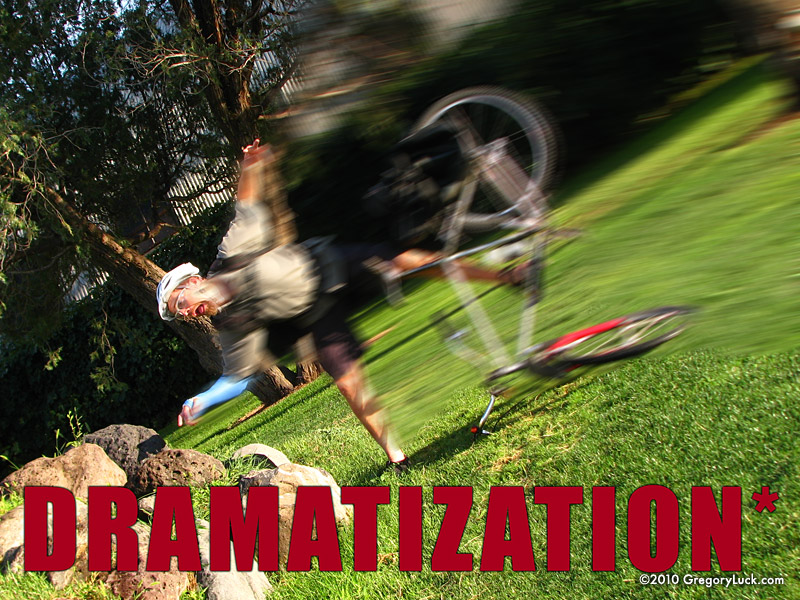 • This is my first ever cast, and after decades of active life, I'm counting that as a positive thing.

• Cameras are designed for right hands.

• Most activities are awkward and slow with my non-dominant single arm, but using a pepper grinder and shucking corn top the list.

• I'm maintaining my sumptuous lifestyle with as little physical help as possible from Trina, since I'm somewhat stubborn that way. I'm not making any plans to go mountain biking, but I'm riding around town on my townie-bike with one arm, running errands and meeting and greeting. Riding is the one thing that doesn't take twice as long to accomplish.

• I ride around town with my arm raised. I'm elevating my arm for medical reasons, not waving "Hi!" Though I might be waving "Hi!" too.

*This dramatization photo is based on actual events, however some details have been modified to fit your screen. Er, like, I was on a mountain bike on a narrow trail. And I didn't have a cast on my arm yet. And I'm pretty sure the rocks I landed on were sharper and more dangerous looking.

Eight years ago I was mountain biking with friends on a frightful cliffside trail near my then-home in Hawaii. The trail was rough and root-infested and muddy and slick. Vibrant green vegetation crowded the trail and spilled hundreds of feet down the valley walls. Did I fall down one of these cliffs and hurt myself? No. On a safe section of the trail, away from the cliff, I bumbled on a small rough spot, lost my balance, and stepped off the trail into the wild ginger plants to catch myself. Except that it was just a tiger-trap-like layer of leaves over a deep hole. 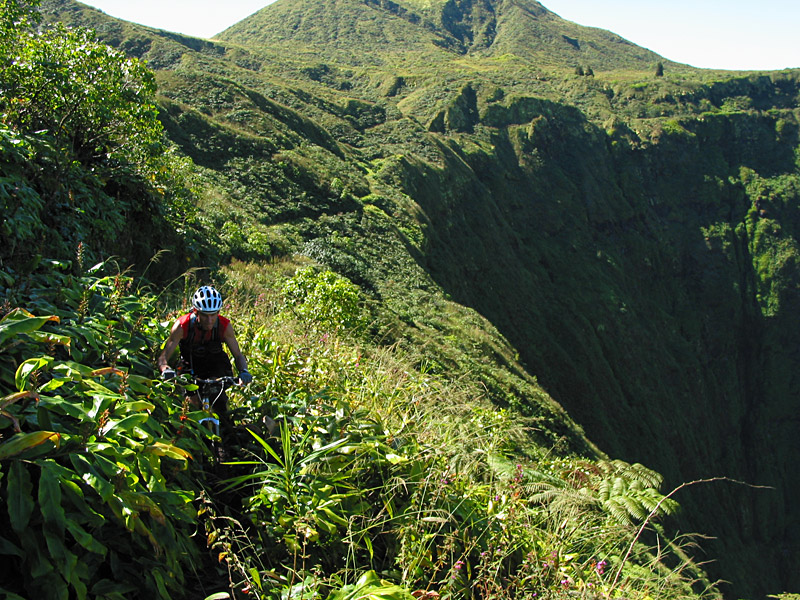 I fell into the unknown depths, and managed to get off my bike and get my feet under me, such that when I did finally hit the bottom seven feet down, I landed all agile and cat-like. (Or as we around here prefer to say: Jack-Russell-like.) Except that my ankle turned sharply and popped. As we rode out, it swelled enormously, and I ended up on crutches for five weeks.

That could keep a guy off his bike. And it did. For two days. On the third day I took one pedal off, strapped my crutches to the frame, and rode, one-legged with one foot clipped to the remaining pedal, back into a semblance of my regular life. 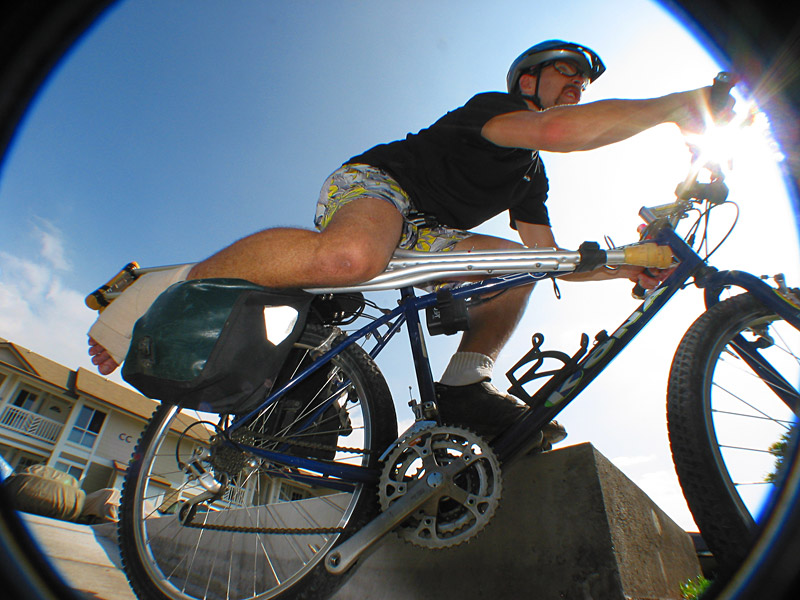 It seems that removing the use of just one of my limbs is not enough to keep me off my bike. Is this some kind of macho tough guy act? Or some misplaced act of stubborn independence?

Perhaps it is this: I have woven the bicycle so deeply into my life that I'm unsure of my place in the world without it. So I will swap shifters to the other end of the handlebar, I will raise my damaged arm into the air, I will grab on tightly with the other, and for as long as I can, I will ride, ride, ride.