Since I'm obsessed with trying to photographically capture the scenery and action of our mountain bike rides, you get more photos!

Last week ended with storms. We missed a day, but rode the next when skies were still stormy and temperatures were cool.


The weekend brightened and warmed and we rode again. Of course!

Straight shot and sequence of Trina riding one of the tough jumbled sections of the trail.

ps If you're a rider, we appreciate that you're reading this. But you might want to go riding instead. Wouldn't ya? Huh?
Posted by Bikeabout at 10:03 PM 2 comments:

Claret Cup
On our evening around-town-wear-the-dogs-out ride tonight, we cruised up to Bookcliff Avenue just below the hospital to check on the Villa d'Oro claret cup. The Villa d'Oro is a bleak apartment building that is landscaped with concrete, gravel, and a couple of rocks -- most definitely no oro to be found here. Somehow this sole claret cup found its way into the scene, and must have done so eons ago because it is HUGE and spectacular! I stopped counting at 100 blossoms.


...by starlings! Based on the wrappers still in the nest, Mom has clearly been having the predictable pregnancy cravings. (mom lower right, beak pointing 11:00)


*Sigh* Now, we must decide whether we want to evict the starlings or embrace them as the myna birds they are -- invasive, yes, but with the delightful and impressive imitative skills of the myna. It is true that at any given time, the bird symphony in my yard includes the lovely warble of the meadowlark, the soft clucking of the quail, the haunting cry of the bluebird, the gobbledy-gobble of the wild turkey, the clear, rich whistle of the Bullock's oriole, the soft, sweet twitter of the goldfinch, the raucous caw-caw of the desert raven... many of which emanate from the beak of the humble, beady-eyed starling.

Their mimicry is quite entertaining, and they are just critters trying to make a living, and similarly to dandelions which you can think of as either a perfectly lovely, humble flower or a terrible noxious weed -- depending only on whether they are where you want them to be or not -- perhaps starlings ain't all that bad? Maybe we should let them stay? But will they run off the goldfinches that also nest in the linden tree? And will they out-compete the red breasted finches that make the most wonderful trilling songs? Is it not too late for screech owls to claim the nest box and if so, would they be so bold as to kick the starlings out? Would they even want it now that the starlings have, beakful by spewing, spitting beakful, removed all the lovely wood shavings and replaced them with sticks and candy wrappers?

Black Widow
I seem to have my own special mutant strain of black widows here in my little paradise. There was one of these in the house last winter with exactly the same red-and-yellow dot-and-stripe marking on her back. She also had the classic red hourglass on her underside, connecting to the stripe you see in this photo. Turns out - see links below - there are a number of black widow species that have markings other than what we think of as the definitive black widow hourglass.

The proliferation in my domain must have something to do with this:

Yesterday's roll-stroll through the golden evening light with dogs.

--Greg
Posted by Bikeabout at 5:56 PM No comments:

They say that when you have a working dog it is imperative for the mental health of the dog that you let him do whatever his breed's job is. Border collies need to herd; retrievers need to retrieve; terriers need to terrorize. If you don't give them some kind of job that is suited to their breeding, you will in time have an unhappy, unfulfilled, even neurotic dog on your hands.

By now we understand that Zeek doesn't only want to hunt; he needs to hunt. He has the Jack Russell "code that explodes," driving him to seek quarry, especially (but not exclusively) underground. He is indeed drawn like a magnet to every hole, no matter how dark or dank...

...and is fearless in the face of any prey, be it a mouse, a rabbit, or a javelina.

Once he discovered that there were goldfish in my backyard waterlily tub, there was no tearing him away from his newly claimed hunting ground. Earth? The terra for which the terrier is named? Who needs it? Are they alive, do they move, do they have necks which can be snapped? That's good enough for Zeek. In order to keep him from destroying the waterlilies when they return from winter dormancy...

we made him a smaller, alternative golfish hunting tub of his very own, and stocked it with small feeder fish. At last, a backyard solution to his need to hunt! Now, this is all I ever see of my dog:


Gone are the days when he'd sit happily for hours indoors playing Scrabble with me.


As far as figuring out what Sprocket's job is in the world, he's new enough to us that we're still learning what he likes and what he could care less about. Predictably, the Assyrian Moth Hound likes to chase and catch things that fly. 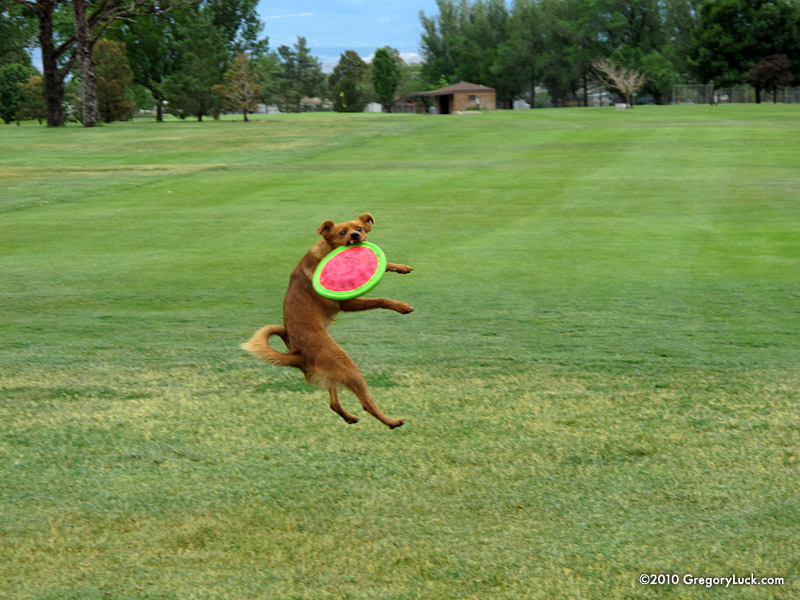 He will go after a stick, even in water, but isn't interested in bringing it back. He isn't, after all, a retriever. He loves to run fast and far and seems fairly indefatigable. We were a little surprised, however -- because as far as we can see it has no links to his genetic affinities for hunting moths and running messages from camp to camp at night -- when he started exhibiting a particular aptitude for aurally detecting leaks in mountain bike tires.

Obviously this will prove extremely useful for us, and if it keeps Sprocket occupied, fulfilled and happy, all the better!

Go here to see the Great Goldfish Hunter in action!

A few evenings ago we were riding around town through the honey glaze of evening light, dogs on leashes, spring green glowing through fresh trees, warm air pouring past our warm skin.

"We're lucky to live the way we do." Trina said. "No." She caught herself. "It's not luck. We've made choices that let us live this way."

"True." I said. Then, ever seeking another way of looking at things, "But we're lucky we can make the choices that we've made."

I was thinking of that Sunday afternoon when we were out on the local trails again. Electric-charged flowers lit up the desert browns. Ravens flew through vibrant skies past our cliff-lined route. Sunlight dodged clouds, highlighting different parts of the view around us. Valley. Cliff. Canyon. Mesa. City.


The trail we were riding was very rugged. Rocky, rough, snarly, crooked, tough. And, if we'd stopped to think of it that way, dangerous.

I suppose we're lucky that we've been able to choose to ride here. We've made choices to have bikes, to have time to ride. Luck and choice have given us the skill to be able to call a rough, jumbled trail "fun". And luck and choice must have given us the eyes needed to look around at where we were and what we were doing and to be amazed by the beauty of that moment.

Someone else chose to put a trail there. Other choices resulted in a city where we live and work. Choices we've made and the choices of many others have shaped the lives we continue to shape in this place. I hope we're lucky enough to be able to continue to choose to be amazed by the beauty of our moments.


(Oh, and the wild onions were blooming!)

Trina's shots from the day:


Posted by Bikeabout at 1:21 PM No comments:

We've seen our first snake of the season. And as the weather warms, there will be more of our fine scaly, legless friends out there in the wild and semi-wild places we like to visit.

I will not claim to be an expert on all snakes. I seem to seldom encounter them during the regular routine of riding and hiking. I have occasionally seen one of the local pigmy rattlers that come out after dark on the local trails, but they have been kind enough to warn me of their presence and thus prevent me from disturbing them or being disturbed by them.

The snakes of which I am most familiar are the snakes I have encountered while on Bikeabout, bicycling along lonely dirt roads in far-flung corners of the American West. My purpose in those times has been to do a small amount of beating on otherwise unbeaten tracks, while seeing as much as possible of the landscape, plant-scape, and creature-scape around me. The snakes' purpose under these circumstances seems, usually, to be to warm themselves in the sunshine on the open gravel or dirt roadways where the most likely of traffic is the passing cyclist with a camera.

Please pardon me, then, if I presume to call myself somewhat of an expert on these snakes whose lifestyles have so frequently put them in contact with my wanderings. And allow me to present, for your enjoyment and education:

The Bikeabout Guide to Road Snakes

I mistook this specimen for the Orange Twine Snake.

A trained handler with proper equipment can safely handle the Orange Twine Snake.

But it turned out that it was actually a rare and aggressive Prairie Twine Constrictor. Lesson learned!