Somewhere along the path our blog has taken you may have gotten the impression that we like to spend time outside riding our bikes on rough trails with our little dogs chasing along behind. This is true. However, since one of those rough trails got the best of me three weeks ago, there has been a sudden lack of that kind of story and the photos that go with it. Please allow me to reach into the archive and drag out this small tale of adventure.

This was my first stab at the lightweight version of bikepacking. Very little equipment on a capable full-suspension bike. Some maps, some open country, and not much of a plan.

Landon drove us out of town in the evening and we spent the night under the moon by his truck. My new untried lightweight sleeping bag was chilly in the night but adequate. A good thing to know before heading out on my own.

Sunday we rode a loop together on rough trails, which gave him opportunity to fly through the air in a couple spots. I rode closer to the ground, as usual. It was a good ride on a bright day in summer. Enough to satisfy, but only the beginning of my ride. 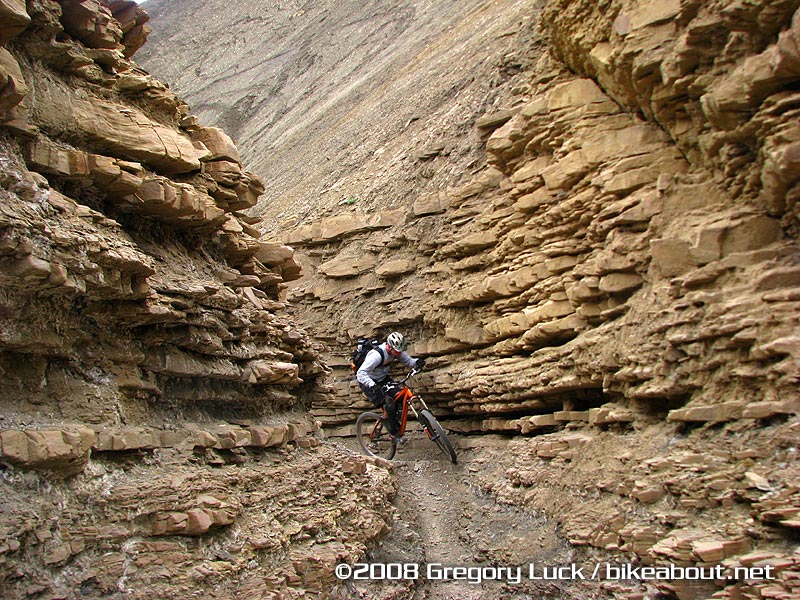 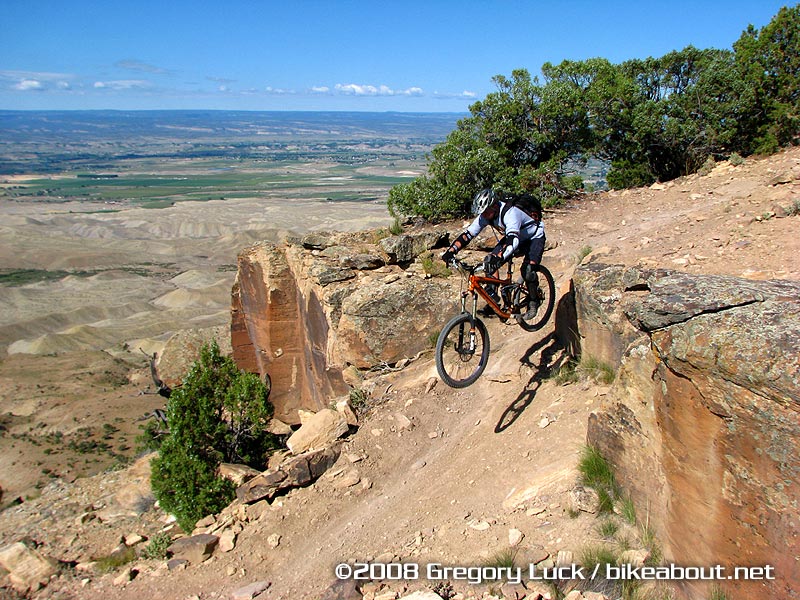 He dropped me off on the side of the highway with my bike and the small parcel of gear strapped to it. I rode down a side road and turned off the pavement and onto the rocky jeep road that would let me ride upward from dusty pinyon and juniper desert to the cooler elevations on the plateau above. The hot afternoon sun beat down on me as I ground away at the gears and the slope. Very soon I had to give up and fall asleep in the shade of a scraggly tree. 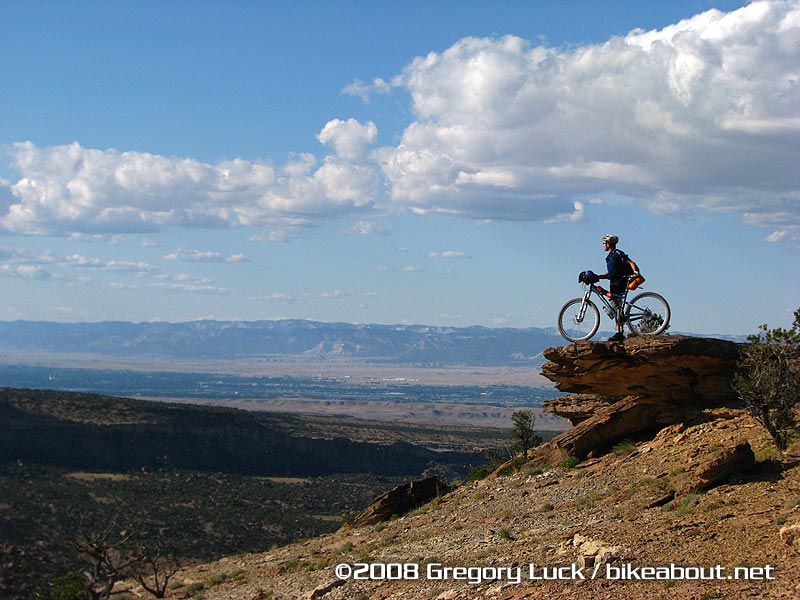 When I woke, ravens were circling and it was already getting cooler. I continued my way upward, pedaling steadily on dirt and rock. Hours went by, the sun dropped westward. I was pushing my bike along sandy doubletrack in the afterglow of sunset when the sky to the east started to glow. Soon I was pushing my bike through sand under the light of the bright moon. And soon I'd had enough for one day. I cooked some food, threw the sleeping bag down, a bush and my pack for a pillow, distant coyotes sounded like solitude, and no switch to turn off the moon. I shivered with the night's chill but warmed in the solitude. 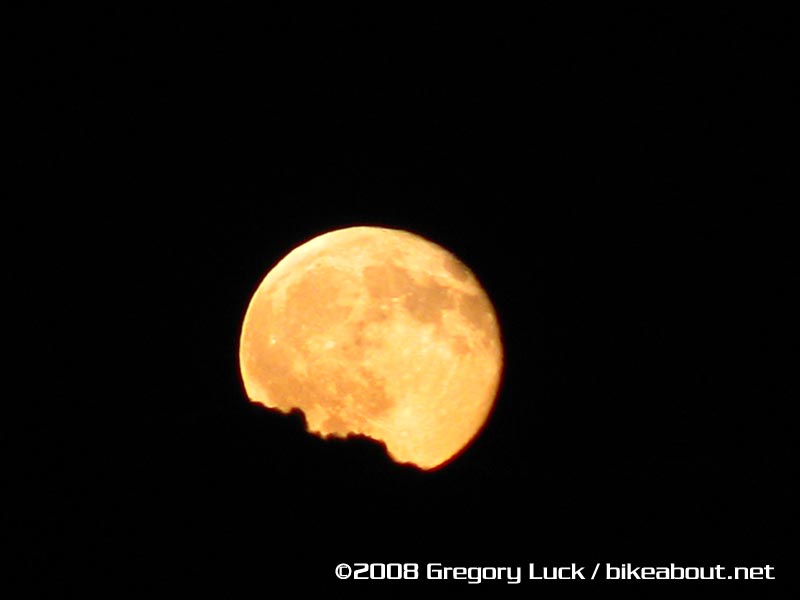 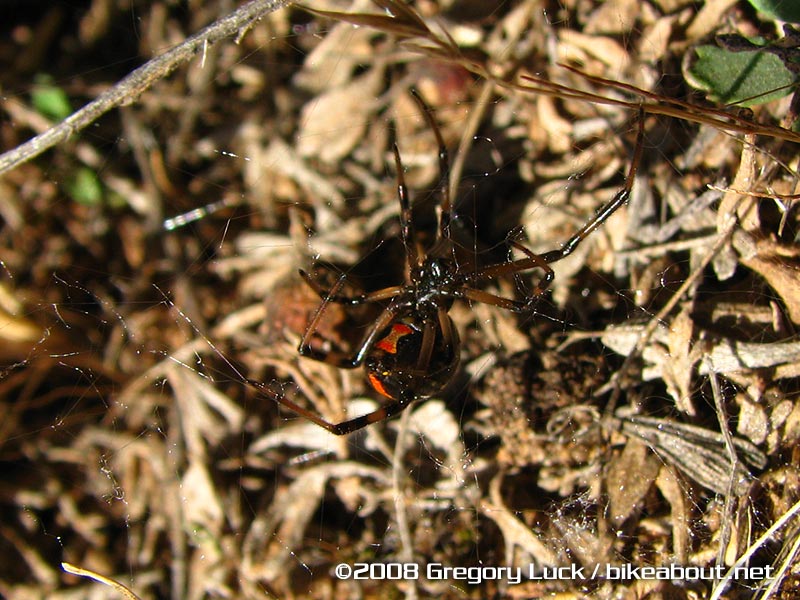 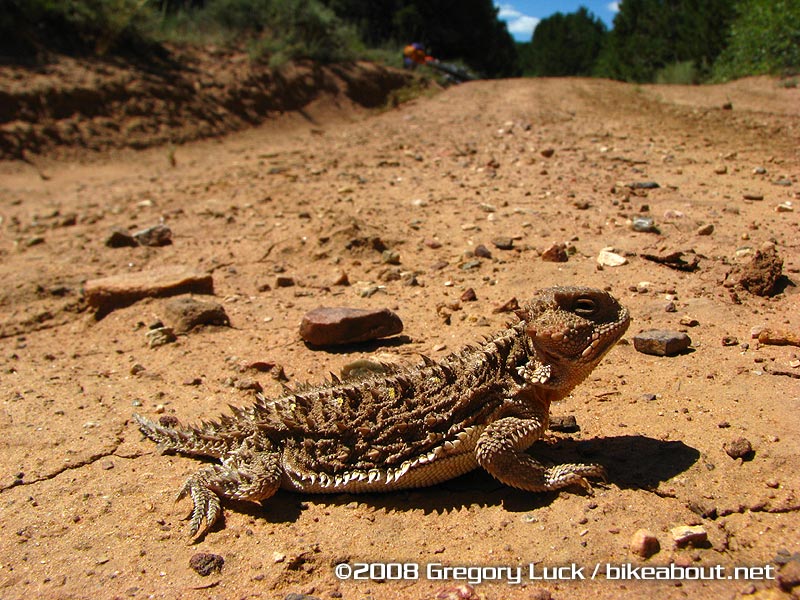 Morning burned bright right off the horizon. There was a black widow spider under my pillow. Breakfast and a short ride dropped me into a canyon where a clear stream poured past tall pine trees that reached upward toward the brick-colored cliffs. A cluster of cottonwood trees waved broad leaves at the sky over a grassy meadow where I lingered. Then I continued onward and upward through open sagebrush country. Sulphur butterflies scattered like confetti where I splashed across a stream. My path followed dirt road and rougher road and road that had degraded and almost disappeared. My path crossed the paths of small creatures that I had time to stop and observe. 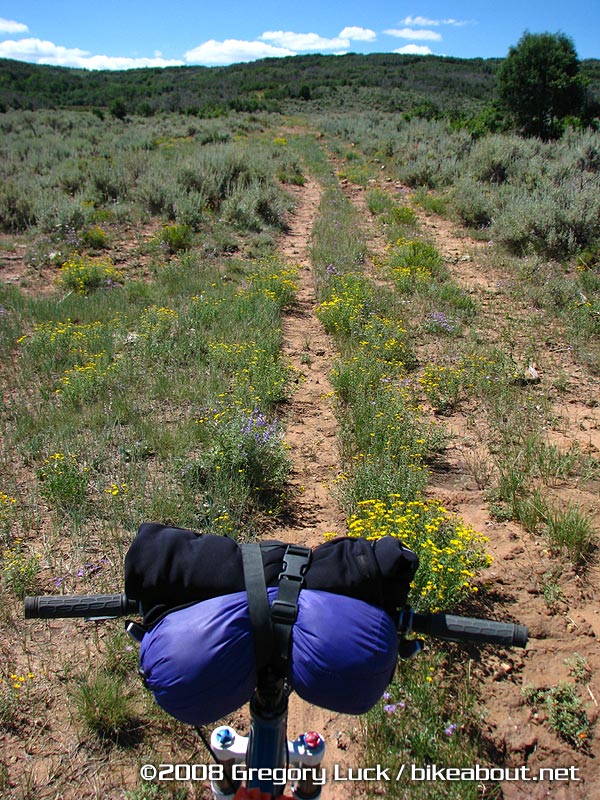 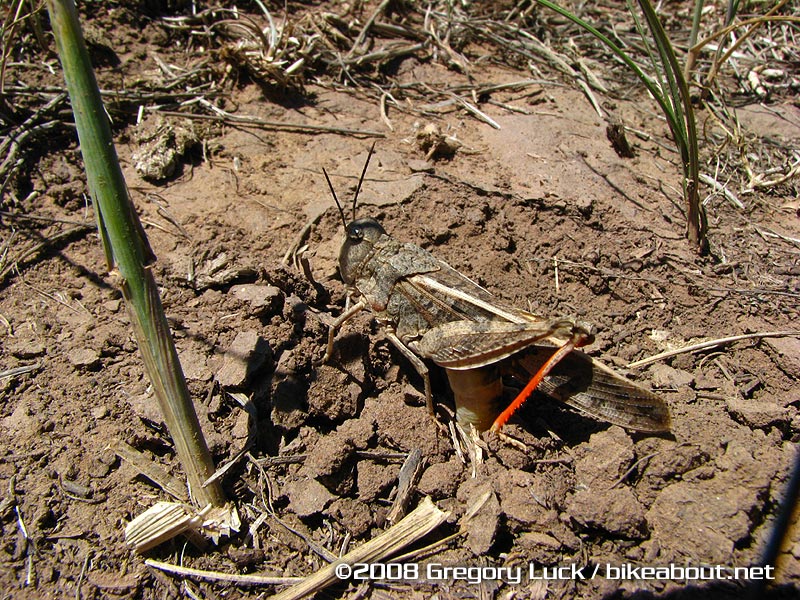 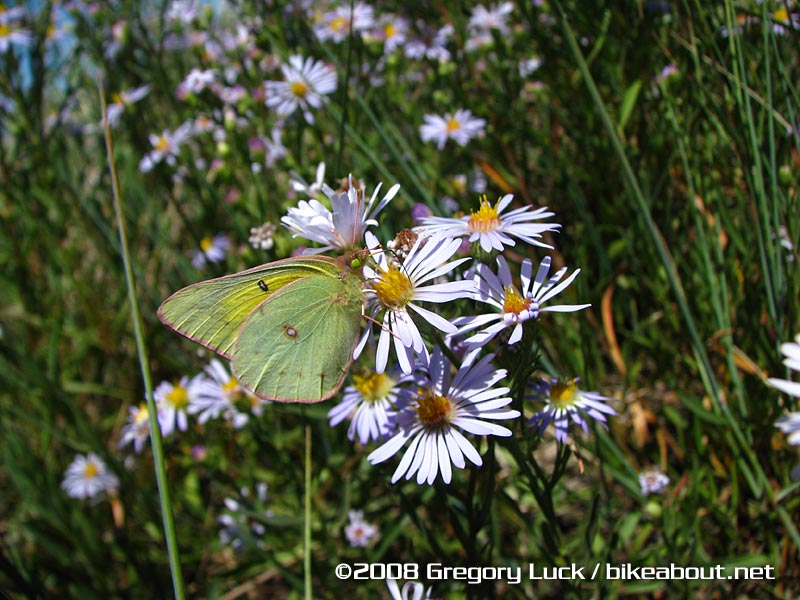 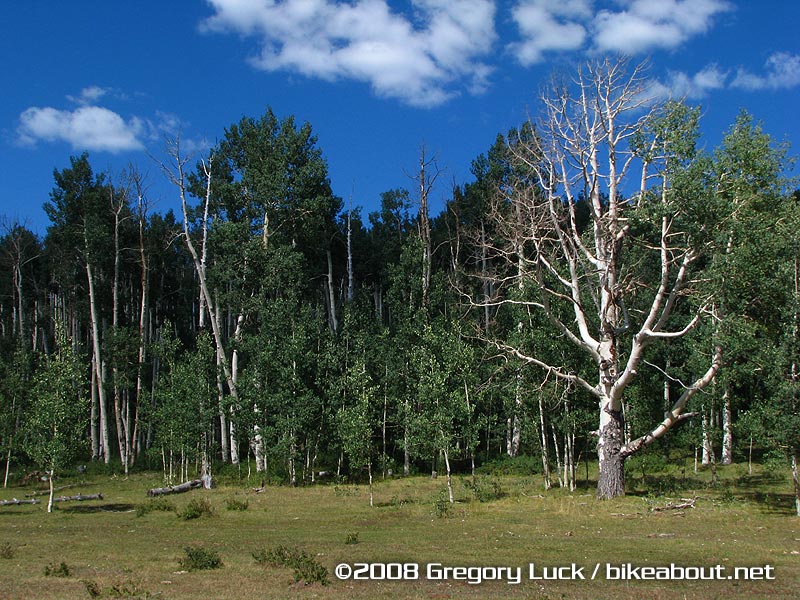 I reached a high point along the gently sloping ridge of the plateau. Here the forest grew thicker, dark pines shot through with the white bark of aspen trees. I wandered near the high rim then turned off onto singletrack (At last!) that plunged into the forest and into a steep valley. The trail was blocked with toppled trees that spoke to me saying, there is no one here and probably no one will come here anytime soon. I flowed with the curves of the trail but rode like I was alone. 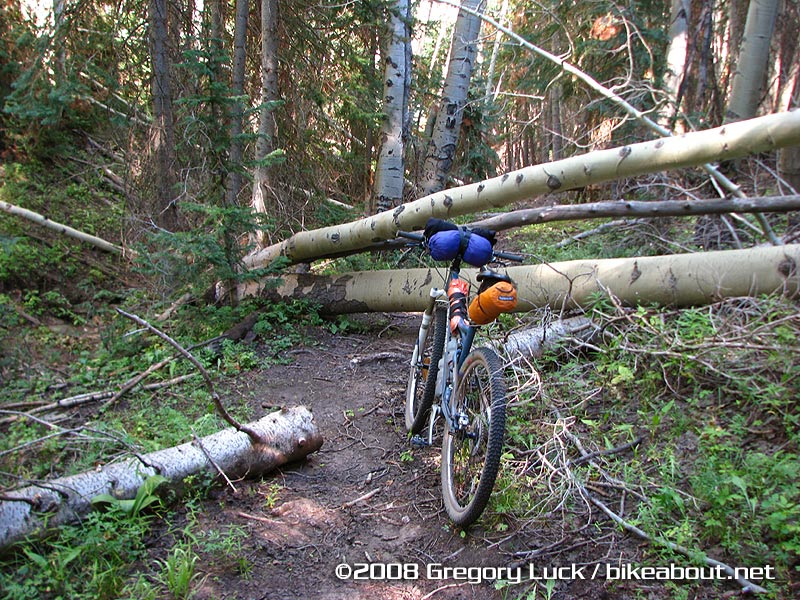 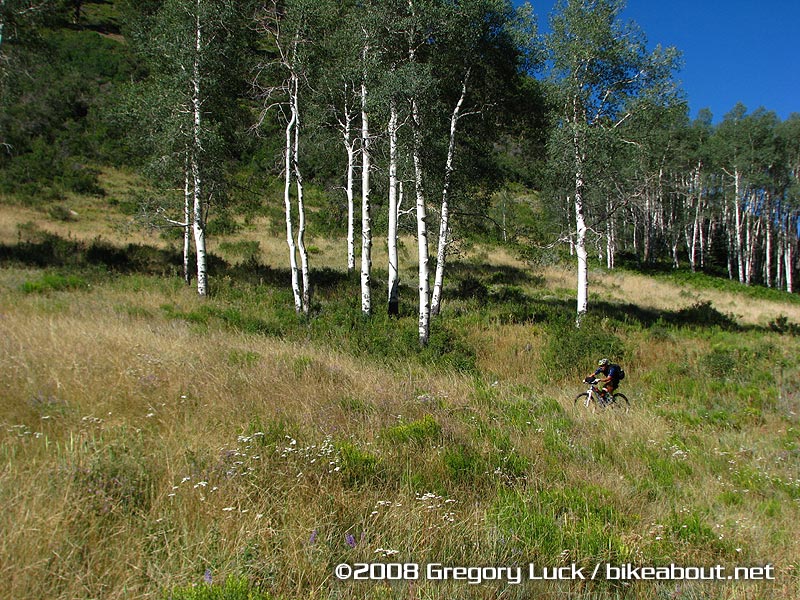 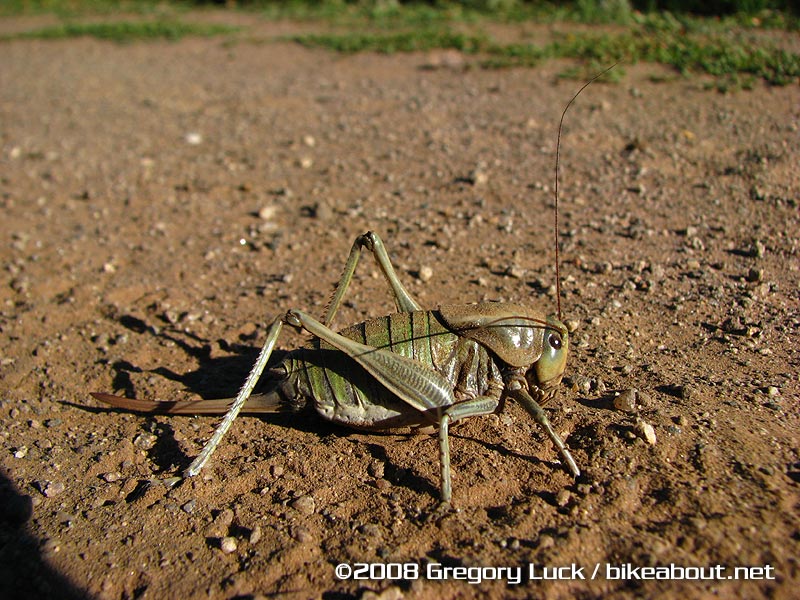 The forest began to shy away from the center of the valley leaving meadows of knuckle-brushing flowers and brittle late summer grasses to chase me along the edge of the stream that grew from springs that leapt from the valley walls. The water and I poured downward as the day began to turn gold. The trail led me to a gravel road that crackled under my tires as I pushed into an evening breeze, into canyons, onto a highway and homeward, riding into a molten horizon at the end of the day, at the end of a long ride, and toward the beginning of another. 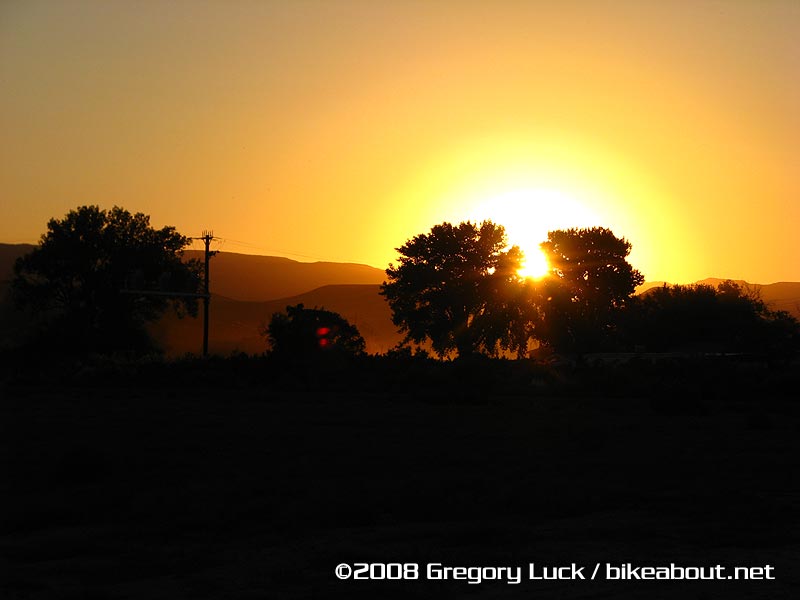